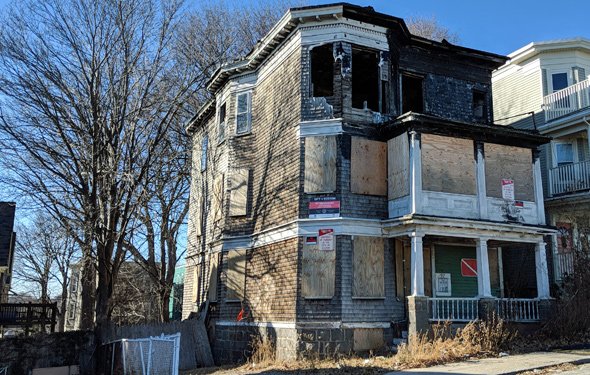 Moldering eyesore on a Friday afternoon.

A housing-court judge had been scheduled today to decide whether to appoint a receiver with the power to raze a Mt. Ida Road three decker ravaged in a 2011 fire, but owner James Dickey may have once again managed to stave off any action for a few months by trying to transfer the case to federal court.

The maneuver has failed in the past - last year, a federal judge sent the case back to state court - but it buys Dickey more time to not do anything about his property at 97 Mt. Ida Rd., which has been an eyesore for years, one the city says poses "a serious risk to the health, safety and wellbeing of any occupants, abutters and residents of the community" - not least because of the rats that are now the building's main inhabitants.

In his federal case last year, which bought him some three months, Dickey, a Sudbury resident acting as his own lawyer, charged that the city was depriving him of his rights to due process by seeking to board up the building without his permission. A federal judge ultimately agreed with ISD that the case involves no federal due-process issues, just alleged violations of the state sanitary code.

Dickey is trying a new civil-rights argument this time: He alleges his rights are being violated by a conspiracy involving the city and housing-court officials to "seize and sell property owned by African-Americans to friends of the court, for pennies on the dollar." Dickey is white, however.

Nearby residents have been complaining about the property for years. Even before an August, 2011 fire there, the city and Dickey battled over conditions inside the building - Dickey also lost a lawsuit against a tenant who had filed a formal complaint.

ISD waited until 2013 to formally demand Dickey either raze or repair the building, which led to several years of fighting in court, during which Dickey did nothing about the fire damage. In 2015, he claimed to be waiting for an insurance check.

a conspiracy involving the city and housing-court officials to "seize and sell property owned by African-Americans to friends of the court, for pennies on the dollar."

Just so long as he doesn't try to appeal

on the basis of "ineffective counsel" when the court rules against him.

But I agree. Anyone who represents themselves in court has a fool for a client.

No, I think he's a genius

His property's been appreciating while he's been staving off the inevitable. Makes sense to me.

It would appreciate anyway because all that is left is the land. Meanwhile, he's paying more taxes than he would with a building there. He's also taking on a huge liability.

His annual tax bill is $2k.

His annual tax bill is $2k. He'd have to spend at least $25k on demolition to reduce the tax bill to $1.5k. That's not a great ROI. He made more money letting it sit while using the courts to stall action.

His sale will either (a) be

His sale will either (a) be discounted by the cost of demolition or (b) require him to demolish the property himself as the buyer's financing won't allow them to purchase the land with that building on it.

He's going to have to pay to demolish the building. And the cost of doing so was significantly less in 2011 and he would have been paying less in property tax for the last 6 years as well.

Actually the value has gone

Actually the value has gone down. And this situation may create liens that encumber the title.

on being bonkers and probably cheap for representing himself.But a claim by a black man, regarding nepotism(backed by institutional racism)is preposterous ie makes him crazy. LMFAO You what the difference between Massachusetts and Mississippi...we expect in Mississippi to be called a nigger directly not for it to coded or veiled in subtle or non subtle cowardice. But don't mind me I am just a race baiting, wanting to be a victim, work is me-er.

What about his neighbors - the ones that he has been endangering? The ones who don't live in Sudbury, but have to deal with the rats and risk? The ones who have been pushing to get the guy to tear this down?

Only problem is, he's not black

I've been alerted by an attorney who has reason to appear in housing court a lot and who therefore sees Dickey a lot that the guy is as white as the driven snow.

I've updated that particular paragraph in the original post to reflect that fact.

Especially since he is white

Especially since he is white

Just out of curiosity

How many blows with a sledgehammer do you think it would take to knock out an important part of that foundation? Science demands an answer.

(It's not like this guy's neighbors are gonna tell.)

If the building is destroyed where will all the rats live and work... when they are not in congress.

Why doesn't he just tear the damn thing down?

That's all the city wants.

He'd pay less in taxes on the vacant land.

ISD should just tear down the house

Put a lien on the property. Make Dickey sue them about it.

If only Boston had some sort

If only Boston had some sort of authority for seizing and redeveloping these blighted properties.

You know they do

I suspect you also realize that Dickey has a right to contest any city actions in court, something he has proven adept at.

What a POS. Living in sudbury

What a POS. Living in sudbury while the neighbors in Dot suffer. Why not sell it, he’d make a pretty penny, or is he waiting/ hoping he could get more money at a later date.

I don't think rationality is involved here at all. He's nuts.

A rational person would do the demolition to save on taxes, even if he wanted to keep the property.

Can we call this a shithole?

Or is that not politically correct?

From one anon to another... f

From one anon to another... f*ck u, you racist jackass.

None of you live in the hood

None of you live in the hood so whyndo you care

If not, why do you care enough to complain about people commenting on the topic?

If you do happen to live right there, do you ever read anything posted here about other neighborhoods, even other parts of Dorchester? If so, why? Or do you just have a Google Alert set specifically for "Mt. Ida Road"?

How close do I have to live

How close do I have to live to Mt. Ida Rd. To have an opinion?

What happens in court regarding this case has implications for other communities.

Other communities have similar issues when a property owner refuses to deal with a dangerously derelict property, except to obstruct any actual solution to the problem.

This was a situation in Medford with different origins, but a similar "tear it down or sell it already" frustration with the owner being marginally competent and unwilling to deal with it: http://medford.wickedlocal.com/news/20160824/boynton-road-house-in-medfo...

The precedent has already

The precedent has already been set.

The difference is using eminent domain to seize ownership of a blighted property instead of waffling around with code/safety violations to try to get the owner to fix the property.

It's not even that complicated

The City, under its police powers, is may demolish or otherwise secure hazardous properties (and then secure any expenses via a demolition lien). Eminent domain is not necessary.

Actually I do. I live in Dot

Actually I do. I live in Dot and for 8 years stared at this piece of s&*t property from my 2nd floor porch.

I live right around the corner from this place. I was living here when someone got stabbed right in front of it, trying to stop a purse-snatching. This wreck needs to go.

An "average" 3 family on Mt. Ida St. is going to sell for $1 mill to $1.5 mill. This one is way below average. To renovate this one is going to cost you as much as it would to build a new one, but I'd day about $500K to $750K you could have 3 high end condos in the same 3 family structure. You could sell each condo for about the same for all three (probably closer to 500K each).

Or this guy could just sell it to a developer for $750 cash right now and this Sudbury chump can invest that in some other rental property if he wasn't such a lazy POS.

So sell now for 750K, or stop being such a lazy prick and get a loan, renovate and sell for 1.5 million.

Numbers are a little off.

Numbers are a little off. Ronan Park triples probably would fetch around $850-900k in good condition tops. Renovate to condos as it is would be about $200-250 sq ft., building is around 3500 sq ft. Condos a few doors down recently gut renovated are selling just around $500k. Commercial lenders will look for a 25% return, putting the developer value at about $500k but the good ones would probably jump at $400k.

Guessing that is one you were looking at which is the second floor of a triple decker on the same street.

I'm also guessing they won't get more for $450 and that the owner has the cash to avoid borrowing money anyway.

DA: Woman got into argument with man in Mass. Ave. park, went to get a knife, then stabbed him to death
Falling trees make riding the trolley somewhat of an exercise in folly
Man stabbed to death on Massachusetts Avenue; second Methadone Mile murder in five days
Man stabbed to death on Southampton Street; suspect arrested
Two shot, one fatally, on Adams Street near Ronan Park in Dorchester
Man shot on Rosedale Street in Codman Square