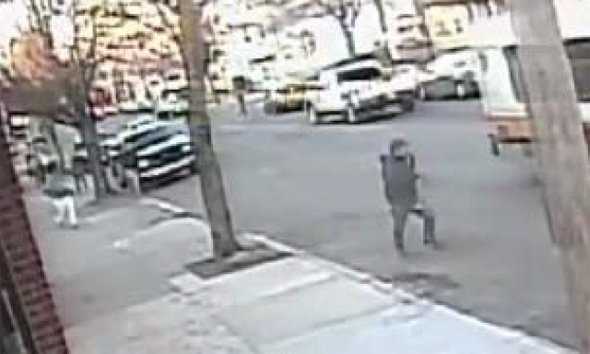 Feds say this photo shows Leoner-Aguirre, in the white pants, shooting at victim running for his life.

Massachusetts does not have a "stand your ground" law, and the Massachusetts Court of Appeals today rejected an attempt by an MS-13 leader convicted of a 2014 shooting in Chelsea to try to create a precedent for it.

Even if Rafael Leoner-Aguirre had convinced the court to agree with him that he had a right to shoot a man on Broadway on April 16, 2014, he'd still be behind bars today, because he's currently serving a 19-year federal sentence for being an MS-13 leader in general, and for several incidents in particular, including the shooting at the heart of today's ruling and a vicious machete attack on a suspected member of the rival 18th Street gang ten days earlier, in which Leoner-Aguirre chased the man down Central Avenue in Chelsea and then slashed his head open with a machete (in both cases, the victims survived).

Leoner-Aguirre was one of 61 people rounded up by federal, state and local authorities as MS-13 members in 2016; 49 of them have since pleaded or been found guilty. Arriving in the US illegally from El Salvador at 18, he quickly took over the MS-13 Enfermos Criminal Salvatrucha "clique" in Chelsea, authorities say.

Leoner-Aguirre argued at his Suffolk Superior Court trial that he shot a man twice in the buttocks in self defense; that while, OK, he and his pal started the fight with two men they thought had earlier stabbed a pal of theirs, he was forced to fire - using a gun one of the opponents had dropped - when he came under attack with a heavy object.

In his appeal of his conviction for the shooting, Leoner-Aguirre's attorney argued that federal law and court decisions give people the right to shoot a gun if they are in fear of their lives, even in states such as Massachusetts, which requires people to prove they first tried to retreat before opening fire. In particular, the appeal cited a 2008 Supreme Court case that overturned Washington, DC's gun-control law and 2010 decision upholding an individual's right to bear arms.

The appeals court, however, said that's incorrect; that nothing in federal law requires a state to let people with guns open fire in self-defense without first trying to escape the situation, and that Leoner-Aguirre made no attempt to flee the fight he had himself started:

Here, the defendant was in a public place and in possession of an unlicensed handgun. Even assuming that the defendant had a constitutional right to use his firearm in self-defense if necessary, it did not give him, or anyone, the right to utilize a firearm in self-defense when it is unnecessary, for example, when one can safely retreat as required by the defense of self defense under Massachusetts law.

In essence, the defendant is asking us to supplant centuries of common law that requires a defendant to retreat before using deadly force, see Monize v. Begaso, 190 Mass. 87, 88-89 (1906), and to hold that the Constitution imposes a "stand your ground" regime even in States that have not adopted one. Indeed, at oral argument, the defendant likened his position to the laws of some States that establish a right to self-defense against threats or perceived threats, even to the point of applying deadly force, the so called "stand your ground" laws. See, e.g., Fla. Stat. Ann. § 776.012, Ala. Code § 13A-3-23(b).

Barring some constitutional prohibition, States are free to adopt such laws. But Massachusetts has not, and nothing in Heller, McDonald, or the Second Amendment prohibits States from abiding by the long-standing rule that deadly force, including by the use of a firearm, may be used only when actually necessary in self-defense.

In his federal trial last fall on the RICO charges, prosecutors submitted evidence, including a surveillance photo, that showed that not only did Leoner-Aguirre not try to retreat, he actually ran after his victim - and only stopped firing at him because he ran out of bullets.

In a sentencing memorandum calling for a long sentence, federal prosecutors argued:

The evidence clearly showed that Leoner Aguirre chased after the victim and shot the victim in the back as the victim was running for his life and posing no threat to Leoner Aguirre whatsoever. As the Court saw, the incident was captured on camera.

The defendant's argument that "if Aguirre had intended to kill Portillo, he'd be dead," ... also ignores the fact that Leoner Aguirre apparently fired every bullet he had at the victim. As the Court heard, Leoner Aguirre was captured immediately following this shooting and the gun was immediately recovered. There were no other live rounds left in the firearm.

And even if none of this was true and the incident occurred in an alternate universe where Leoner Aguirre had extra bullets to fire at a victim he had already wounded, Leoner Aguirre should still not escape responsibility for an attempted murder because he did not attempt more kill shots in broad daylight in the middle of a public street in a commercial area with numerous witnesses.

Did the opposite of standing his ground

He was chasing his victim, while emptying his gun at the guy. If he had stood his ground (and not pulled a gun), there would have been no problem.

Massachusetts does not have a "stand your ground" law, and the Massachusetts Court of Appeals today rejected an attempt by an MS-13 leader convicted of a 2014 shooting in Chelsea to try to create a precedent for it.

Shooting a victim in the ass is to humiliate

not to defend or attempt to kill. Seems to happen more with other gang bangers than MS-13, which seems more intent on killing.

"Leoner-Aguirre made no attempt to flee the fight he had himself started:"

Even in states with SYG laws you can't claim self defense when you initiated the encounter. Even Zimmerman's defense team didn't try it.

This is not a "Stand your

This is not a "Stand your ground case" and should not be labeled by the media as one.

You're right: Based on the evidence before us (some of which is from federal evidence the Massachusetts court did not consider), the guy did not "stand his ground."

But his lawyer, who presumably is familiar with the laws of the Commonwealth, tried to make the argument that a) People have a right to "stand their ground;" b) Recent federal gun-control decisions let people "stand their ground;" c) Those decisions overrule Massachusetts laws banning that defense; and d) The guy in this case was in fear for his life and so therefore was standing his ground.

And then the Massachusetts Appeals Court pretty definitively said, nah, bruh, Massachusetts does not have a "Stand your ground" law and the cases you cite don't make us impose one and we're going to stick with Massachusetts law.

In other Chelsea news

Covid rage: Woman kicks out bus window when asked to put on a mask, police say
Feds urge Bostonians and visitors to the city to start wearing masks indoors again even if fully vaccinated
Rollins nominated as US Attorney for Massachusetts
Infamous King Arthur's Lounge being replaced by a stripper-free cannabis shop
Juneteenth in Boston
How Everett and Chelsea got screwed by the stimulus package