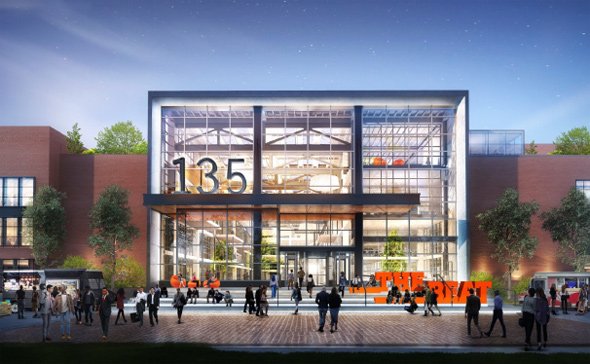 Nordblom Development this week submitted detailed plans for turning the old Globe plant at 135 Morrissey Blvd. in Dorchester into what it's calling the Beat - a facility for "creative office, technology, light manufacturing, warehouse, and life science tenants."

Rather than tearing the building down, Nordblom would repurpose the existing spaces inside for the new office, R&D and warehouse space - as well as, the company hopes, a food hall and a fitness center, and maybe even a rooftop farm. Antiquated communications and HVAC equipment left behind by the Globe would be ditched and replaced with state-of-the-art equipment.

The building would have 868 parking spaces - with 5% set aside for electric vehicles and the ability to ramp that percentage up to 15%.

Nordblom is also proposing landscaping changes to make the 16.6-acre site a place people from the surrounding areas might actually want to visit - including sprucing up the DCR park along the marshy pond next to the site:

Pedestrian paths, lighting, benches, and trash receptacles will be installed throughout the site, and maintenance of the adjacent Patten’s Cove park will be funded by the repositioned facility. An existing security fence along the southern site boundary will be removed to allow pedestrian access to the site from Patten’s Cove park and the Savin Hill neighborhood, including a multi-use path adjacent to the site and integrated into the Morrissey Boulevard sidewalk system, thereby considerably improving neighborhood access to the combined MBTA JFK/UMass Red Line/South Shore Commuter Rail Station north of the site.

The Project is expected to generate approximately 3,120
permanent jobs in the creative office, tech/flex, life science, restaurant, and retail spaces.

Nordbloom hopes to start work on the project this fall, with the renovations expected to take 12 to 14 months. "The Beat" is a throwback to

"The Beat" is a throwback to newsprint's age of reporters working a "beat."

Dot will become a homogeneous white neighborhood like decades past.

So people of color

don't participate in Tech R&D or life sciences? If nothing else, the UMB student population will likely feed people into the industries in the new complex for internships, jobs, etc.

Not according to The Boston

Not according to The Boston Banner. There's an article in last week's publication which implies although there has been a plunge in joblessness for people of color, it does not necessary mean that the jobs are "good" jobs (i.e., the jobs that would be in this new Dorchester development.) More thank likely, most of these employees will be white or yellow, I mean Eastern European Descendants or Asians.

They get all the best jobs!

Great for when Morrissey Boulevard is not closed due to flooding.

The Globe plant opened in 1958

You can get to the place from the north when the road floods - even before the state implements its plans to basically raise the road level.

As a long time Dorchester resident I can tell you that the the frequency of flooding events and closures has increased dramatically since I started using Morrissey Boulevard regularly in 1975. While it is true that access from the north is not impacted, that doesnt help any of us who come from the south. Dorchester Ave is hit or miss on a good day, and is usually more crowded when Morrissey is closed. And I would have to drive south to Neponset Circle first to catch 93 north and get off at the Columbia Road exit. Either option is problematic on a good day, and worse when Morrisey is closed. Traffic backs up on Freeport too.

As far as the proposed reconstruction and reconfiguration of Morrissey, I'll believe it when I see it. And the last time I looked that disastrous plan would reduce much of Morrissey to 2 lanes to accomodate bicycles, which will cause even more problems. Yes I know that the plan calls for better traffic light coordination, which again I will believe when I see it. The current configuration is absurd at the entrance to UMass. There are long 2-4 minute stretches where no one is moving, not cars, and not pedestrians.

This site came within a couple of feet of flooding earlier in the month.

There's also an entrance off

There's also an entrance off Savin Hill Ave., but the gate was permanently closed to vehicle traffic after September 11, 2001. Pedestrians could still pass through, however.

Don't "beat" it to death

The name so nice I used it twice!

When Can We Officially Declare a Glut?

Great. Another field-of-dreams 'innovation center'. In the meantime, to those already in line for millenial techies who value craft beer availability . .

The Watertown Best Buy is across the street

And at my last visit to that mall, it's doing fine.

For that grungy building to host innovation it needs WINDOWS

It's a dark old cavernous building. This can only work if they add a SERIOUS amount of new windows, open floor plans, glass, and beautiful wooden floors. I'm curious to see how it will look.

It is not a space I'd want to work right now.

Adam gave us a link to click on. In it you will find the existing and proposed elevations.

I'm curious to see how it will look.

If you're as curious as you say you are, I would have expected clicking such a link would have been irresistible!

Do it, you might be happy you did. There is an an increase in windows (you've got to scroll down to at least page 29 of 247). The design looks like it accommodates plenty of different types of work uses.

I like it, but 3,120 jobs? Why do they always vastly overstate the jobs created by any given project?

But I seriously doubt techies will want to trek there, nearby bars or restaurants? Nope. Bike lane safe? Nope. Proximity to downtown, seaport, cambridge? Nope

Make it a non profit hub or something with education...

But I agree more with your comment on it being an educational space.

I will beat the drum that the City of Boston missed a massive opportunity by not convincing John Henry and partners to give them a 100 year lease on the building and converting it into a new state of the art high school for the city. Henry could put his name on the high school, the city could close and sell a couple buildings to pay for construction, and it forces BPS to up their high school quality to match those of the suburbs (because that is where parents are trying to go for their kids).

Example of a public/private partnership like North Bennet School & the Eliot? Check
Near public transit for students and teachers? Check
Near the highway and has parking for buses? Check
Near a university for advanced level courses? Check
Enough space for vocational, ITS, and arts? Check
Near city owned athletic facilities? Check
Parking for admin & visitors? Check (Let's be honest here a majority of teachers DON'T live in Boston)

Place could be underwater in 100 years

I think the site will benefit form the state's efforts to protect UMass but 100 yrs is a long way off.

I see this development as a pretty good stop-gap measure to recoup investment in next 20-30 years.

Students at two UMass campuses don't want to get Covid-19 shots, so they sue
Man charged with quadruple shooting on Cameron Street in Dorchester
Grove Hall getting some new one-way streets as part of plan to slow traffic and reduce crashes
Guy on motorcycle sought for quadruple shooting in Dorchester earlier this month
Crash involving Boston cruiser, truck and SUV near South Bay
In Dorchester, a neighborhood full of three deckers, new three decker opposed because of flat roof