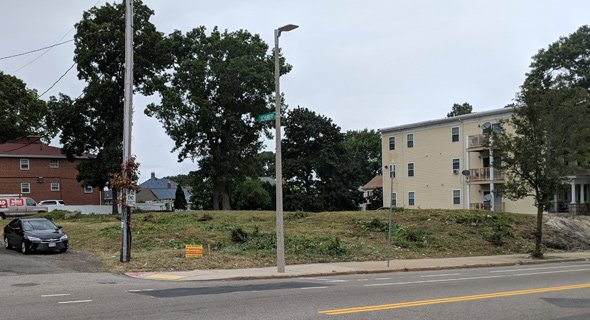 Proposed lot, across from Burger King and CVS.

The Board of Appeals today approved a Dorchester developer's plans for three triple deckers on a ledgy outcropping across from the Burger King in Washington - provided he can work out a driveway issue with a neighbor for the 28-space parking lot he wants to build.

John Lydon wants to put his triple deckers - which would have nine total condos, each with three bedrooms - at 4623 Washington St., a site that has been vacant for decades and where neighbors beat an earlier proposal for a two-building complex some 17 years ago.

Lydon and city officials say he and neighbors reached agreement on the new proposal, which he said would be more in keeping with the triple deckers that already sit next door. And that includes building a lot for 28 cars - big enough to ensure nobody going to any of the buildings would ever suck up a valuable space on any of the surrounding streets.

But the LLC that owns a building on the other side of Schubert Street, a narrow private way, objected to his plans to eliminate existing curb cuts on Washington and Liszt streets and to funnel all the traffic to and from the lot via Schubert. In fact, the LLC's lawyer told the board, Lydon's "overloading" of the private way like that would be illegal and said Lydon should keep the other two curb cuts and use those instead.

Lydon said he really wishes the LLC had made its objection known before the very last of seven or eight community meeting stretching back to last year, because he eliminated the Liszt Street curb cut at the request of residents there.

The board approved the proposal 6-1 with the proviso that Lydon come back with a permanent solution to the Schubert issue.

Board member Anthony Pisani opposed the project. He did not state a reason, but his vote came after he asked Lydon if he were the same guy suing the board over a zoning issue involving a proposed new road behind Lydon's Dorchester home, which Lydon acknowledged he was.

Lydon said he expects to sell the units at between $500,000 and $600,000 apiece. Because of the ledge on the site, the buildings will not have basements; Lydon's architect said the development team is still deciding how best to remove enough ledge to put the buildings down on slabs.

Before Lydon had the lot's weeds whacked a couple weeks ago, it had become a place for turkeys to forage: 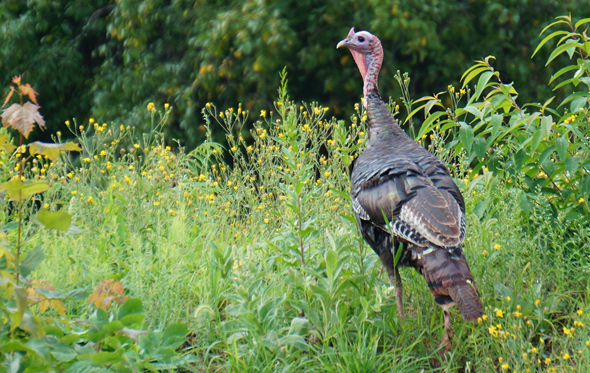 I know it's a losing battle with developers, but it's sad to see open spaces going away.

If we stop breeding like rabbits - there will be more room for everyone.

You can walk across the WR parkway to the water town piece of woodland or across Washington and then down the hill into the large, undeveloped Stony Brook reservation.

Per the internet, Stony Brook is 616 acres of parkland.

It's nice to see open space in all places, to see sunlit areas in the late afternoon without another massive condo unit blocking the sun by 12pm. The turkeys would also appreciate the open land.

Oh give it a rest. This is a

Oh give it a rest. This is a vacant, eyesore lot. A triple decker is a massive building now?

Move to the country or Cleveland then

We need housing in the city for non-rich people and this fits the bill. We have can have lots of open land and single family housing and the city will be only livable for the upper and lower 25% income brackets. Or we can build some 'massive' apartments which are (checks location) the exact same size as the neighboring buildings. I vote build more places for people to live.

Open space is indeed a great asset to improving quality of life here but this just isn't the lot to save, again given it's proximity to woodlands. If this was in the middle of Roxbury or something, your argument might be hold more water.

This lot backs up to a park. A BIG park.

Park right behind it!

Unmaintained open space isn't useful for anyone except turkeys and litterers.

Not even open space

This is a vacant lot.

It likely has not been vacant for many years - I'm betting something burned down.

It isn't open to the public, there are no hiking trails on it, no dog lot, no tot lot ... private, closed property.

It's next to the West Roxbury Parkway and like a block from the wooded areas of Bellevue Hill and the Stony Brook Reservation, the latter of which is so countrified they had to put up Deer Crossing signs, so I'm not too worried about that turkey (and the several others with her) finding some woods to go back into.

Then it has to go to Parks

Math Does Not Compute

It seems to me, that triple deckers would be a poor choice anyhow since they're wood and crappy. Why not build something nice out of concrete?

Each unit is 3BR. If the unit is let out to three people with their own cars, multiplied by nine units, plus a spare for the landlord/super/pizza guy to use, then the math makes plenty of sense.

When the population drops because everyone dies doe to car commuting ...

Time to end our suicide pact with fossil fuels.

Sure, in that hypothetical

Sure, in that hypothetical that won’t happen. It’s not 1960 anymore. Not everyone owns or wants a car.

it's not possible to build something nice out of concrete?

More multi-unit housing in the land of three, two and and one-family homes. How long before Washington Street from Rozzie Square up to Parkway intersection has permanent bus lanes to solve commuter delays due to traffic congestion?

That would be a good thing -

That would be a good thing - the fewer cars on the road, the more people use public transportation or bicycle the better.

A triple-decker is a three-family home so I don't see how this is anything new to "the land".

You missed the best part

Wait, what do you mean Triple Deckers?

The guy is planning three buildings, each with one condo per floor, each three stories high, based on plans that, from what I saw, look suspiciously identical to class triple deckers.

I love the idea of a

I love the idea of a classically styled, modern construction triple-decker. Are the plans available publicly?

But unlike the BPDA, the zoning board doesn't put their filings online, so if you want to see them, you'd have to go down to their office at 1010 Mass. Ave., and who wants to do that?

...I mean, nobody puts up housing that looks like it's made from traditional materials or scales to the existing neighborhood or has fewer than a dozen different residences per square foot anymore. I'm certain you must have misread something...

How in the world was this

How in the world was this allowed to get all the way through the review process and then actual approval? Three parking spots per unit? I understand it's not right on the T but this is excessive.

Well, the neighbors asked him to guarantee no effect ...

On the on-street parking there, and he had the land, sooo ...

The fact that neighbors feel empowered to make demands like that says all one needs to know about the housing and zoning situation in this city. Someone in the mayor's office or councilor needs to tell the neighbors their demands have to be rational. He could have built another triple decker on some of these parking spots and still provided two per unit if he wanted to. Ridiculous.

Have you ever been to this neighborhood?

I'm generally sympathetic to the argument about development being too parking-focused, but there's no way anyone is living in this area without a car. In a 10-15 minute walking radius, there's a shopping plaza across the street with a Dunkin/Burger King/CVS, a combo pizza shop/liquor store, and really not a whole lot else. Roslindale Square is a mile away downhill (good luck walking that mile back uphill carrying groceries). The only real transit option is the 34 bus, which really falls under the "last resort" category. Add on that 3 bedrooms is a whole lot more likely to mean families than roommates, you additionally have to factor in that the likely residents are parents with children, which makes the bus even less feasible.

There's no parking of substance on Washington Street here because it's right up against where the road expands to two lanes approaching West Roxbury Parkway. That leaves the adjacent side street, Liszt Street, and I can understand why the residents there don't want 30 more cars dumped onto their street.

I'm all for cutting back on parking in walkable neighborhoods -- thinking of development in East & South Boston + Allston in particular. Here? The facts don't support it.

I'm very familiar with the

I'm very familiar with the area. I agree it's hard to live there without a car. No one said otherwise. I didn't say no parking. I said no need for a parking spot per bedroom. That's excessive and ridiculous.

So the neighbors own the public streets?

How is it that they get to demand anything like this?

They need to get their own parking spaces and stop hogging public land.

Judge reduces life sentence for man convicted of building a bomb that blew up a cop in Roslindale
Citizen complaint of the day: Bongo drums at 3 a.m. in Roslindale
Not just Franklin Park: Residents complain of loud parties featuring car-speaker wars along American Legion Highway
Advocates look to new state environmental law to help keep cliff, woods from being dynamited for suburban-style apartments on Hyde Park/Roslindale line
Early morning burglary attempt leaves Roslindale store employee knocked out, but would-be robbers get away with nothing after passing motorist intervenes
No more legal cloud over Sean Ellis