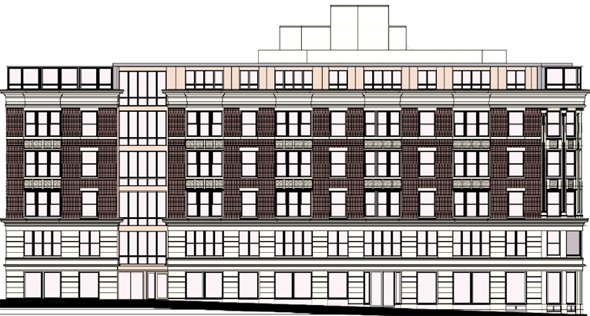 Developers David Winick and David Matteo have filed plans with the BPDA for a six-story apartment building with space for a ground-floor restaurant where Dorchester Street, Preble Street and Dorchester Avenue meet.

The proposed $7-million 400 Dorchester St. would replace a convenience store, parking lot and three-story residential building, according to their plans, filed today.

It would sit across Andrew Square from a six-story apartment building that won zoning-board approval last month, and next to two Preble Street buildings the two had built earlier. It's a few blocks away from the far larger and tallerWashington Village complex now under construction.

Winick and Matteo's building would have 35 units - 6 of them rented as affordable - divided between 5 studios and 30 one-bedroom units.

The building, which would also have a roof deck, would have no parking. would have no parking - the developers note its location near both the Andrew Red Line stop and the 5,
10, 16, 17, 18, 171 and CT3 bus routes, as well as ZipCar and Hubway (now Bluebikes) stations.

As a gateway building leading into Andrew Square, the proposed design started by taking the approach of using the forms and massing of a previous two-story building that existed on the site in the early 1900s. Some of the borrowed elements include the height of the lower two floors of the proposed project, the lower cornice and banding trim profiles and massing, the storefront massing and profiles, and the curved building front at the street intersection. The upper floors take queues from other “flatiron type” corner buildings located throughout the city, such as those located at the West Broadway and East Broadway intersection, and in the Fields Corner neighborhood.

In the developers proposal they failed to mention "close to drug dealers, drug addicts, drunks, and homeless, all hanging out in Andrew Square"
Adorable!

Used to be a feature of Kenmore

Now look at it.

That's not the reason people will not buy these, it's because there's no parking.

We don't need more cars in the city. We need housing for people. No cars = more affordable.

Do you own in the city?

Or do you rent? You want to live in the City without a car? Then why don’t you live in the apartments next to JFK station? They have plenty of vacancies.

Actually the real reason no one will buy them

is because theyre not for sale.

This actually looks good - with the brick touch. Fits Boston's character much more appropriately than all the glass crap going up.

I believe these developers do

If you think crap adds class. Let us all know when you plan on moving into these.

Waiting for the end of the world projections from the birds and air circulation people.