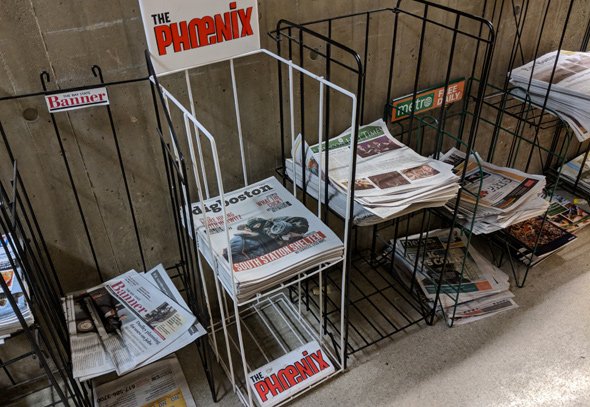 Down in the basement of Boston City Hall, near an ATM and the entrance to the men's room, is a set of newspaper racks for Boston's free weekly newspapers - including an old Phoenix rack now used by the Dig.

At the risk of dating myself

I remember when the Phoenix had two editions, the pay Phoenix sold at newsstands, and the free Boston After Dark , which was given away on college campuses.

Presumably the pay edition had more content, but I never bothered to find out by purchasing a copy.

The wikipedia entry (https://en.wikipedia.org/wiki/The_Phoenix_(newspaper)) largely conforms to my memory of the situation after arriving from Chicago in September of 1971. BAD was originally an arts and entertainment paper (perhaps with the sex ads, etc.). Stevie Mindich took over and, around 1972, bought a different paper called the (Cambridge?) Phoenix, which included news, politics, etc. He combined the two into a new paper called the Boston Phoenix. The arts part, BAD, was distributed free of charge on local campuses. Maybe you had to pay to get the whole paper, at least for a while, though it was ultimately distributed for free. Some of the original Phoenix staff revolted and went off to start up the Real Paper.

The movie "Between the Lines" is, I think, loosely based on the story of the original Phoenix and the Mindich takeover.

The Real Paper had a weekly puzzle with T shirts for a prize. I had a treasured "Real Paper Puzzle Winner" shirt that I remember losing when, on my way to the airport to go back to Chicago for Christmas in the late 70s, I absent-mindedly left a small bag with the shirt in it in the Auditorium T stop.

The Phoenix used to reprint the Times of London crosswords as a contest. I got a T shirt from that I may still have around somewhere.

I got mentioned a couple of times in Alan Lupo's "Hot Dots" feature, which highlighted upcoming TV events, when I corrected some misstatements he made about old movies. The one I remember is when he had mixed up Jane Withers, aka "Josephine the Plumber" of 60s TV ad fame, with, I think, Ann Miller (or maybe Virginia Weidler, another child star from JW's era).

I came down hard when they published an erroneous claim that Fenway Park was the oldest active baseball park, when I knew damn well that Comiskey Park was two years older, but that one never got published because I never connected with them for some sort of confirmation. But Fenway's still here (debatable about whether you can say the same about its contemporary, Tiger Stadium), while grand old Comiskey has been replaced by the regrettable whatever-the-name-is Field.

Assuming you mean the Tiger Stadium in Detroit, it was demolished in 2008/2009, after failed attempts to preserve. A source of personal heartache because my family frequently attended several games each season in the 1970s. The two most exciting sports events I've ever attended were games pitched by MA homeboy Mark Fidrych in 1976, the brief shining moment of "Bird" mania.

The field itself has been preserved and is used for youth baseball, vintage baseball, etc.

sort of, but not quite correct

They were identical except for the cover

And their competitor The Real Paper did the same thing. They published "The Free Paper" which was exactly the same as the paid edition, except for the cover.

The Phoenix, WOW, News from the Underground

The Phoenix, WOW, that's what us old geezers used back in the day before Tinder for a "hookup"

You know, when a land line (Ma Bell) mean you were dealing with a Marine Operator (US VHS Marine channels) on a two-way radio before cell phones…..

When having a "Dish" meant a woman was hangin' off ya arm, not the side of your house.

...when people listened to terrestrial radio and went to clubs to see live bands.

The Phoenix lured me away from The Dig, my first steady food-writing gig (which plucked me from the amateur ranks of Chowhound without me looking for the job), to do their Cheap Eats column, which I did for years. I often miss it: so much of the joy in our scene is to be found in modest places, especially the ones where immigrant chefs are cooking for other ex-pats, not dumbing down the food for the longer-established locals. I still haunt those places on my own time. I was surprised to revisit places that I'd raved about to not find my review posted, until I figured out that they mostly don't read English-language publications. I like to imagine them being bemused to find a sudden influx of white folks all ordering the same ten dishes for a couple of months.

Then the Phoenix's sister publication Stuff @ Night, later Stuff Magazine, grabbed me to do fine-dining reviews, which I also did for years. In its last gasp at hanging on, The Phoenix merged the Stuff concept into it, turning into a glossy-covered publication, at which I took over the fine-dining reviewing gig from the hallowed veteran Robert Nadeau, who'd written for them since the 70s. I have a book that compiles a few hundred of his earlier reviews: just brilliant. That dude was singular, wrote beautiful, well-researched reviews about everything, high to low. He is still my inspirational touchstone, along with J. Gold at the LA Times.

The new Phoenix lasted a year before it folded. (Say what you will about how it was carried by sex-worker advertising, but it employed countless great culture critics, political columnists, news writers and investigative journalists: I feel the loss of its voice especially keenly in these benighted times.) My editor there, the immensely talented Jackie Houton, landed at The Improper Bostonian, and she brought me over. A hundred mostly fine-dining reviews later -- they let me review cheaper places once in a while -- plus a half-dozen cover features, I'm still hanging on, a dinosaur slowly sinking into the tar pit of old-media professional restaurant reviewing, which looks about as relevant and necessary as a landline phone in the age of Yelp and TripAdvisor.

I'll keep doing it as long as they'll have me, but when youngsters reach out to me, asking how they might land a similar gig, I tell them to rethink their career plans. It has the same growth prospects as the bank-teller profession, a job I also once held.

When I stumbled into the role twelve years ago, you could read 25 or 30 local restaurant reviews researched and written to journalistic standards every month; now it's down to a handful. Time and technology march on: no point kicking about it. Just grateful I lucked into one of the last seats in that brutal game of musical chairs.

I stumble across the Improper every once in a while

and read your reviews, which I always pay attention to. Also Ezra's thing. Not much else that resonates.

I also remember all the

I also remember all the wonderful Robert Nadeau reviews.

At CPL no free tabloids allowed, no truly public bulletin board.

Does this mean the Dig will eventually morph from it's stated mission of alternative journalism into a marketplace for flesh and human trafficking they way part owner Chris Faraone's old paper The Phoenix did?

I mean it's amazing that some of this town's most prominent (in their minds anyway) media figures never seem to want to comment about those lofty beginnings when championing their time helping that pimp Mindich make money off some (allegedly) underage girls occasionally getting the shit beat out of them in some shit hole motel somewhere. Oh, but they did journalism occasionally.

So I wouldn't want my paper associated with what that shit rag became.

And not to forget The Old Mole newspaper hawkers shouting, "Get your new Old Mole!"

Anyone else remember The

Anyone else remember The Straight Dope?

Let's go back even farther... Back in the 60's there was a mimeographed weekly called The Broadside that covered the (mostly folk) music scene. I remember buying it at George's Folly in Coolidge Corner (a topic for another day). Sometime in the late 60's they became a two-sided broadsheet: The Broadside remained focused on music; the Free Press was political. If I recall they carried David Omar White's cartoons.

I think I still have an issue or two of the old Cambridge Broadside tucked away somewhere. It's amazing the amount of small cofffeehouses with live music that were dotted all around the downtown Boston area back then. In the 60s there was also the "Avatar" underground newspaper put out by the Mel Lyman Fort Hill people, which is another major story unto itself.

In the late 1990s, I got all of my news from the Weekly Week

They published such hard hitting stories like: "Q*bert Attacks Charles Hotel", and "Snakes Are Everywhere" (which was retracted the next issue: "Snakes Are Not Everywhere"). They even covered the local Eurotrash scene's influence on Stuff at Night. Much of its archived material is available here.

Hilarious. I missed these when they were around in the 90's.For some reason this story had me literally laughing out loud.

The last of the storm moves out
Man stabbed in the neck near State and Congress downtown
New Hampshire man gets to fly his 'Christian' flag over City Hall Plaza tomorrow as City Council begins work to ensure he can never do so again
More trouble at old Government Center Garage site: Four-alarm fire
This isn't Times Square on VJ Day and you can't just grab some random woman and kiss her, man learns on the Green Line
Kid learns train conductors can ask his shorty where she's heading