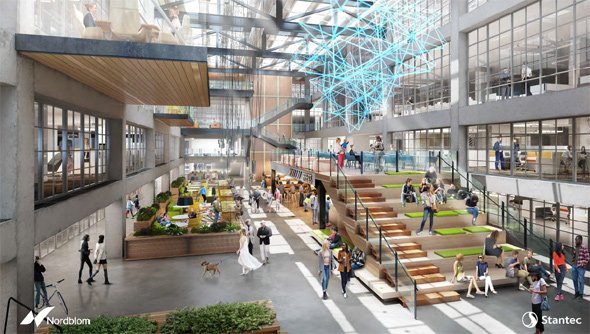 Archtect's rendering of the building interior.

The Board of Appeals yesterday approved most of what developers asked for so they can turn the old Boston Globe plant on Morrissey Boulevard in Dorchester into a new office, research and manufacturing space aimed at high-tech companies.

The approval, though, came only after board members struggled with how to define the future: Nordblom had asked for permission for a swath of uses, some of which it might not need, because high tech and the Boston zoning code don't necessarily match up: A private company seeking R&D space needs a different approval than a college seeking R&D space, except for UMass Boston, which is exempt from Boston zoning because it's a state institution, except UMass Boston has so far expressed no interest whatsoever in space in the new building right near its campus. And how does one even define an autonomous-car company under city zoning?

Both the board and the company agreed, however, to strike proposed permission for a tattoo parlor - which the company said it probably wouldn't seek to attract and which the neighborhood said it didn't want because it wouldn't generate too many jobs.

Nordblom Senior Vice President Todd Fremont-Smith told the board that while the nearly 700,000-square-foot building on the 16.5-acre parcel - to be rechristened the Beat - would cater mainly to space-hungry local startups, the first floor would also be open to the public - including a proposed food hall that would go into the space where giant printing presses once churned out the days news on paper.

He explained what the company is trying to do with the building, for which it paid John Henry $81 million: "Kendall Square is out of space, Boston is running out of space. Everything that's coming out of Kendall Square, out of Boston in the last 30 years is now coming to market," from artificial intelligence and 3D printing to self-driving cars and life science. The Globe plant, with ready access to the JFK/UMass and Savin Hill stops on the Red Line is just the place for the next generation of knowledge workers, he said.

When the building is fully rented, Nordblom expects to see between 2,000 and 3,000 workers - although the building will have a maximum capacity - which would include the food hall and associated uses - of closer to 8,000.

Fremont-Smith added Nordblom has agreed to provide 2,500 square feet of built-out space for training for local students - he said both Boston College High School and the Boston Collegiate Charter School are interested in internship programs.

Zoning-board members, including Dorchester resident Craig Galvin, said they loved the overall proposal. "This is exactly what this space needs," Galvin said.

Nordblom said they came up with that list at the request of ISD Commissioner William Christopher, who said that would cover everything they might need for both the office/R&D space and the food hall and other public space.

Fremont-Smith said knowing they already had city approval for a wide range of uses would make it far easier for him to convince prospective tenants to move in than if he had to apply for zoning approval for them. He added that as part of its own approval in April, the BPDA required creation of a punch list of specific uses that were not allowed - for example, Nordbloom agreed, at the community's request, to not even think of allowing somebody to put in something like BU's biolab, where researchers study highly dangerous pathogens.

"My job is to lure these companies to Dorchester," he said. "The last thing i need is a zoning question."

Galvin, board Chairwoman Christine Araujo and others agreed in general, but said they were worried about just allowing an open-end approval for everything. "Today you're in good standing with the neighborhood," Galvin said. "Tomorrow something changes and you might not be."

Fremont-Smith readily agreed to drop approval for a tattoo parlor.

Board members said they were not opposed to all the other possible uses, but said they want to at least review them first, and so voted unanimously to allow all the possible office and R&D permutations - as well as such things as the uses that would allow a food hall and microbewery, but to require Nordblom to come back if it wants to rent any space for a conference center or to a college or trade school.

The mayor's office, city councilors Frank Baker, Michael Flaherty and Annissa Essaibi George all supported the proposal, as did the Columbia-Savin Hill Neighborhood Association. Nobody spoke against it.

"The Globe plant, with ready

"The Globe plant, with ready access to the JFK/UMass and Savin Hill stops on the Red Line is just the place for the next generation of knowledge workers, he said."

JFK is horrible as is the walk along Morrissey, and it's a good 15 minute walk from the Savin Hill stop even if the OTBers don't complain about the foot traffic. Otherwise it's just any other car-commute office park. There's zero foot traffic for any commercial uses.

Maybe with a full reconfiguration of Morrissey, but that seems once again to not be happening, having missed their Feb 2018 mark for final Phase 1 plans. But we're far, far from the vision of dense housing and nice walkable streets in the Columbia Point Master Plan.

With Linda Pizzutto Henry's mentorship at the Globe it has allowed the upward re-usification of this facility to allow knowledged workers to coagulate for the next stage of tech revolution. Thanks to LPH showing the way with HUBweek on City Hall Plaza, Knowledgeable people and companies with know how now feel confident in coming to Boston. When these future workers at this upscaled building solve cancer, we will have women to thank.

It's walkable from Columbia Station

I basically did it for 4 years, adding in getting across Morrissey Blvd.

The Columbia Peninsula region is just a terrible place to exist as an urbanite. These Globe plant gestures will do nothing to change the suburban atmosphere of the pen. You need a company the size of Amazon to generate actual change.

Ok? It's a T stop and it's 5 minutes away. I'm not sure what else you need exactly.

as is the walk along Morrissey

Again, ok? Perhaps the possibility of having an actual non-empty thing of any kind on that stretch of Morrissey will spark someone into fixing the shitty sidewalk, or even nudge the full Morrissey revamp to actually happen. And honestly, it doesn't get truly awful until to get to the Globe building. It's fine from JFK through the radio stations, and then old but mostly fine (even quite wide) in front of the old WLVI building.

15 seems a little much. also I think very few people would choose to walk from Savin Hill instead of JFK, because it's longer, a less obvious option, and isn't served by the Braintree branch.

The Globe will pick up the story of the Feds investigating the shady permit$ given out the side door after the Herald breaks the news.

You are not implying any of

You are not implying any of the ZBA members are... unethical? LOL
The last people in Dorchester to know ( or admit they know) how sleazy and parasitic a certian ZBA member is is the local press!! The guy is a pathological liar and has no problem terrorizing small children in order to protect his "reputation"

So NOW where are escaping handmaids supposed to hide out?

The Globe kept a shuttle to the Red Line for its employees. Maybe they can bring that back.

But yeah, how about reconfiguring ... everything? Every time I hear on the radio "OMG, Morrissey Boulevard is flooding!!" I laugh, because you can look at the map, realize that it's nothing but a causeway over the ocean, and say "well of course it's flooding!"

Why anybody promotes this vapid, vain, selfish little man, who has pasted his fat, smirking, face up all over Neponset, to the dismay of his neighbors,(nobody wants to look at that, the GIANT bad AIX Cologne graphics and sad "uncomfortable in our bodies" weird portraiture) begs reason.

Somebody call ISD and see what the commercial sign code in residential neighborhoods is please....god......make it go away....Unpainted porches, weeds higher than plantings, grey cause grey is " sophisticated"? poly vinyl nightmares.

So much for our urban hipster

So much for our urban hipster soccer stadium. I've always doubted that the Revolution will ever leave Foxborough anyways.

That was supposed to replace the Bayside Expo Center, not the Globe plant.