House of Blues concert ends in backstage beatdown, or just an argument, depending on whom you ask 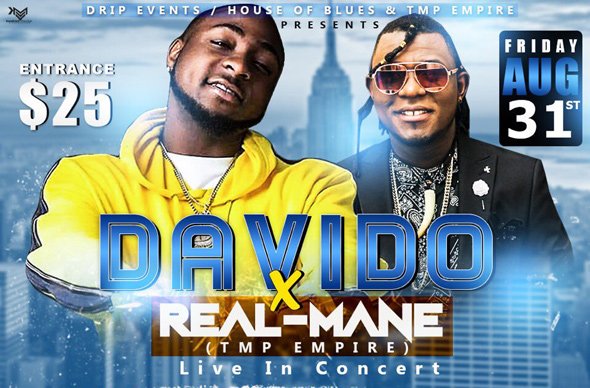 Members of the band that opened for Nigerian singer Davido at the House of Blues on Aug. 31 told the Boston Licensing Board today that the singer's beefy security entourage beat them up and chased them out of the backstage room where they had been enjoying a post-concert snack.

Police and several members of TMP Empire said the group was eating in one room shortly after 11 p.m., when a member of Davido's security entourage came in and told them to be quiet because the singer was doing an interview. Band members said they were quiet - and really didn't want to do anything to upset either Davido or his security crew, which they already knew had a penchant for violence.

But about two minutes later, band members said, security guys re-entered the room they were in, told them they had no right to be there and began to try to eject them from backstage, forcefully, in what turned into a beating that included punching, kicking and grabbing. They said they went to Tufts Medical Center for treatment.

On being questioned by police, Davido's security coterie denied any physical violence and said the incident had not risen above that of an argument, a BPD detective said. He added that, at the hospital, police did not find any physical signs of a beating among the TMP members.

House of Blues has its own security guards and BPD details, but they were not in the backstage band area at the time of the incident, a House of Blues official said. After a concert and after the public has cleared out, band members are generally left alone in the backstage area to allow them privacy to shower and unwind before they leave, he said.

"We had no idea anything had happened" until the next day, House of Blues attorney Dennis Quilty said. Quilty argued that whatever happened between the two groups involved Davido's security contingent, not the venue's.

The licensing board decides Thursday whether the venue could have done anything to stop the incident and, if so, whether it warrants any sort of punishment.

[...] either Davido or his security crew, which they already knew had a penchant for violence.

[...]whether the venue could have done anything to stop the incident [...]

I'll go with "don't book acts with a known penchant for violence." as a fairly obvious answer to the question.

I don't know why there is all this violence, fights, gunfire etc. associated with musical performers these days. In my day rock stars limited themselves to trashing hotel rooms, throwing TVs out windows and driving cars into swimming pools. Now THAT was music!

The licensing board decides Thursday whether the venue could have done anything to stop the incident and, if so, whether it warrants any sort of punishment.

It would be awesome if the licensing board could hire Jonathan Groff to reprise his role as King George to read these verdicts.

Almost any Disney villain would work too but the custom animation costs would get out of control as those villains do tend to bloviate.

Backstage security's not a price that you're willing to pay.
You cry
That hoocoodanode that a brawl would have happened that day.
Why so sad?
Remember we made an arrangement when you opened up.
Now you're making me mad
Remember, to have entertainment, I'm your man
You'll be back, soon you'll see
Your liquor license will belong to me...

In coronavirus crisis, Asia's loss is Boston's gain: Instead of going to Asia, BSO will play series of local popup concerts
But does it have Smaht Pahk?
Like magic, two BU Green Line stops will begin to disappear
Wentworth unveils new logo
LGBTQ theater group to run new LGBTQ-focused theater in apartment building that will replace LGBTQ club in the Fenway
Another Boston measles case reported