Hubway, the Boston-area bike-share program today announced a deal with Blue Cross Blue Shield that will dramatically increase the number of Hubway bikes and rental stations.

In exchange, Hubway will rename itself Blue Bikes, which sounds like what happens when you can't get satisfaction at a Hubway station, but that won't happen, Hubway and Blue Cross say, because the deal will mean an increase in available bikes from roughly 1,800 to 3,000 by the end of 2019 - and more than 100 new rental kiosks in Hubway communities - Boston, Brookline, Cambridge and Somerville.

It sounds just a little bit

And What's The Story With Ofo Bikes?

I saw one for the first time yesterday parked in Andrew Square.

Different company trying to get into the Boston area

They have a deal with Chelsea. Unlike Hubway (would use the new name, but I'm sure I would write a similar sounding phrase; give me some time), they don't have fixed kiosks - you just drop them wherever you go and the company uses their GPS to find and collect them.

I've seen the Ofo bikes at

I've seen the Ofo bikes at Market Basket in Revere and many people were checking it out.

I've seen them in Malden as well. I think I read somewhere recently about someone trying to smash the GPS off the bike, Uhub?

Nothing Can Be 100% Vandal Proof — They're Like Shopping Carts

If someone is determined to defeat the bike's lock and tracking systems, of course they'll be able to do it. But to what end? It has little salable value. Sure, a few bikes will fall victim, but vandals will quickly learn the bikes are simply not worth their trouble.

The bikes are not unlike shopping carts. A few carts always wind up getting stolen and/or destroyed, but it's such a minor percentage of the overall inventory of vehicles, it still makes sense to provide the service.

They're a dockless bike

They're a dockless bike sharing service. Instead of having the dock to get and leave the bike like Hubway, you just lock it up wherever you want/can. The company will retrieve them or move them around if they have to.

They just came into the area in the fall. I think they only have a couple hundred bikes, compared to the 1800+ (and growing) that Hubway has.

Not doing so well in China

Lots of complaints that they a nuisance.

Our own little China 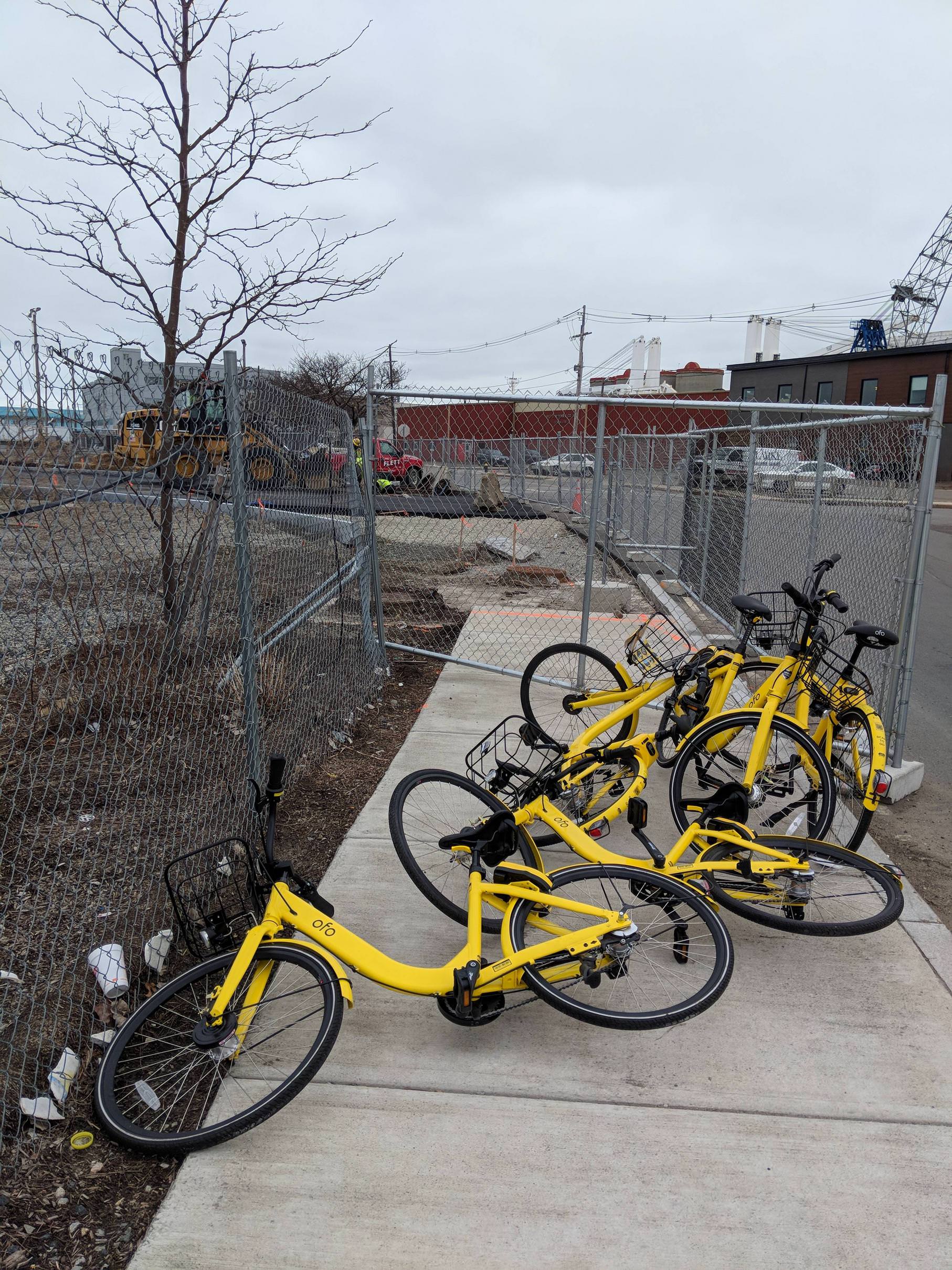 As seen yesterday in the seaport area in the no-man's area near the large ship repair facility. There were dumped by OFO as no one would ride out there and walk away.

These bikes are an eyesore. They are cheap and poorly built. The company is hoping if they dump enough around town they'll make money. They couldn't care less about local laws or pedestrian access when they enviably block sidewalks and get dumped in the Charles.

I'm a big fan of bikes as transportation but these clowns are not helping.

I think the fence is a lot more of an issue when it comes to walking on that sidewalk.

No one would ride out there?

Not people who work there at times that the T doesn't run?

I am also a big supporter of

I am also a big supporter of bike sharing, and dockless bikes have even more potential. But OFO? I signed up and downloaded the OFO app some time ago. All it shows at the moment in the Boston area is 2 Bikes available in Revere -none in Chelsea where is it also officially operating (I think). And this is fairly typical. No additional information available, nothing -although it says they are offering free rides this month! OFO is clearly wasting everybody's time here.

They pulled all the bikes off the street for the winter. It was well publicized that Malden/Revere/Chelsea's trial period had ended.

The ones that are still showing on the app are either stolen (in somone's home) or inaccessible to the retrieval team. To the poster that said OFO must have dropped them in the Seaport because no one would ride there... that's impossible as they no longer have staff because they are not operating in this region for the winter. These probably couldn't be retrieved a few months ago. Likely behind a fence, etc. Though it looks like someone could simply report them to the company now that they are retrievable.

Those need to be recycled

I Used An Ofo Bike In Cambridge Last Year — I Liked It! 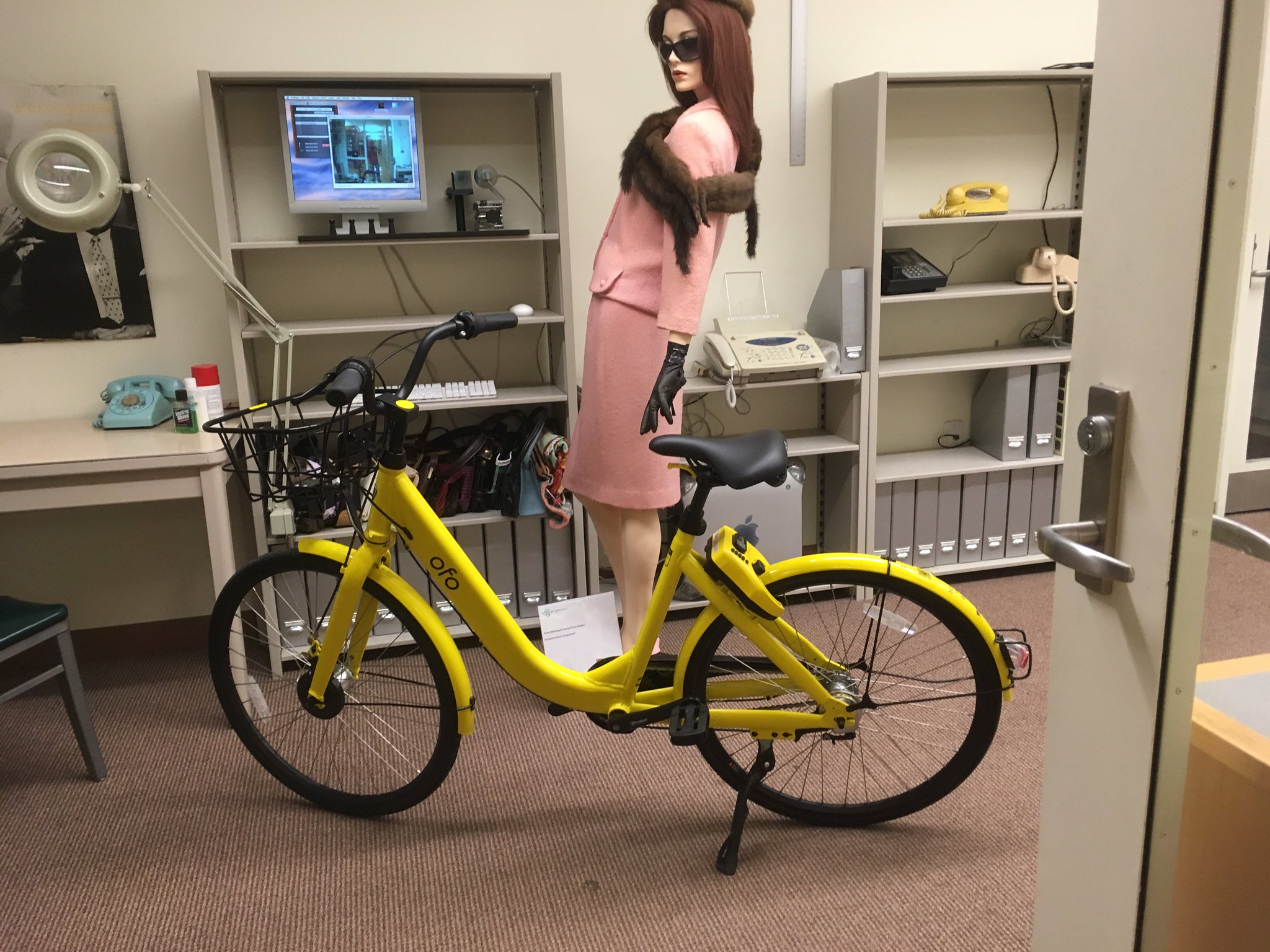 At the time, there were lots of them in Revere, Everett, Chelsea, and Malden, but I was surprised to see this one in Cambridge. I saw a lot of people enjoying Ofo bikes last year, but most of them seem to have gone somewhere else, or are perhaps just hibernating for the winter. The color of forsythia blossoms, I hope Ofo bikes will bloom again in the spring!

They're certainly not as heavy-duty as Hubway bikes, but they're very easy to use and work just fine for simply getting around in a city. It's incredibly convenient to quickly unlock any bike you happen to come across. Even more so when you're finished, with no need to go out of your way to find a special docking station. Wherever you leave the bike, another customer can come along and ride it somewhere else.

Yes, it's necessary for the company to manage the bikes properly, including relocating bikes which stray far and wide, to more central locations. Because the bikes have GPS tracking devices, it's not that difficult to do.

The bikes shown in the Seaport picture are only guilty of not all being lined up neatly on their kickstands; perhaps they were knocked over during the storm. They are not in anyone's way in your "no-man's area", yet are available to any man (or woman) who'd like to ride them.

The first ride (or rides) are free, and then it's just $1 per hour— no membership commitment or other charges. Unless they can't ride a bike, there's no reason why anyone can't give them a try — and they really should before complaining, so they'll know what they're talking about.

There's one outside the pru

on Belvedere St. It's been there about a week, and is broken. The front wheel is completely backwards, among other things. Ofo knows, hasn't done anything about it.

From what I've heard about the service,

Are You Really Sure It's Awful?

Nay-sayer's forecasts of doom and gloom

I vaguely recall people forecasting stories of doom and gloom when Hubway was announced.

Stuff like traffic fatalities, and bikes ending up in the Charles.

To my knowledge, little of that has happened, and Hubway has mostly been a good thing. I found some stories in the Globe archives, but they were pretty generic. Hubway was announced April 2011 and launched that summer. Can anyone who's better at searching than I am find any of the negative forecasts?

As early as this summer, residents and visitors taking quick trips in Boston will be able to rent bicycles from dozens of sidewalk kiosks, under an agreement expected to be signed today that will create a bike-sharing network inspired by those in Paris and Washington.

Boston officials said the system, to be called Hubway, will open in July with 600 bicycles and 61 stations in the city, though they envision growing in a few years to as many as 5,000 bikes at more than 300 kiosks, from Brookline to Somerville.

At an afternoon ceremony with bicycling advocates, Mayor Thomas M. Menino is scheduled to sign a contract worth nearly $6 million with a company called Alta Bicycle Share to build and operate Hubway for three years. Alta is also behind a program that debuted last year in the Washington area and now boasts 1,100 cherry-red bicycles at 114 stations.

I remember that after Hubway had been operating for awhile, Mayor Menino was a guest on Greater Boston with then host Emily Rooney. She began her interview by saying she had to apologize for wrongly predicting that Hubway would be a failure, that nobody would want to use the network in the city.

they envision growing in a

they envision growing in a few years to as many as 5,000 bikes at more than 300 kiosks,

Still a long way to go to hit those numbers.

It's a six-year deal, so (hopefully) Hubway isn't going to disappear any time soon. Yea!

I remember when bike shares

I remember when bike shares started in the US some people thought it would be a mess with tourists and whatnot not knowing what they were doing and creating havoc. Years later there has not been one Hubway related death. And I believe there have only been two deaths in the whole country(Chicago and NYC). Bike shares have gotten people out of cars and that is a good thing for traffic, air quality and everyone's safety. I would much much rather have a tourist on a bike than behind a wheel in Boston. I'm glad the program is expanding.

Their skills are not that good.

And understand this- I’ve had a Hubway membership for the past two years. I am really excited by this news and pray for them to expand to Roslindale. But it still has to be said that the worst cyclists I’ve seen in the Back Bay are pedaling those clunky bikes.

I was surprised/annoyed when I tried to Hubway to my friends house and found the nearest station to be in JP. I would have thought they'd at least have some near Forest Hills. Especially with the bike path going all the way there, the Emerald Necklace nearby, Arboretum, etc.

They avoided Forest Hills due to the construction. If there’s no station by my renewal date next summer, I won’t renew.

Clunkiness may make them safer, though

On a Hubway, I'm likely to ride more cautiously because the machine just won't let me get up to my usual biking speed of 12-15 mph.

And Aren't We Glad They're Riding Bikes Instead Of Driving Cars!

I love them when traveling

It makes a spur of the moment bike ride so much easier when you want to explore a new city. I've seen the system in San Fran and rode in Paris and tried the Vegas system recently, its just such an easier process than finding a rental place, doing all the paperwork, trying to return it before closing time.

The rental bikes in Chicago

The rental bikes in Chicago are medical health insurance adverisements on two wheels. Constant reminder of how $$$ monthly health insurance rates are: bummer. Hoping Hubway doesn't transform
their bikes into ads that cyclists have to pay to pedal around as well. Hubway should be paying cyclists to advertise Blue Cross Blue Shield around the city, not the other way around!

Wu looks at banning fossil-fuel use in new development, major renovation projects
Time was, you could rent an apartment, then grab some donuts for the celebratory road trip in your Chevy Vega
BPD captain who had been on paid leave for more than two years cleared of most charges
Rats running amok through Boston; residents, councilors demand action
No matter where on earth they roam, people will know Boston is their home
Court to Quincy: Boston can rebuild its bridge to Long Island