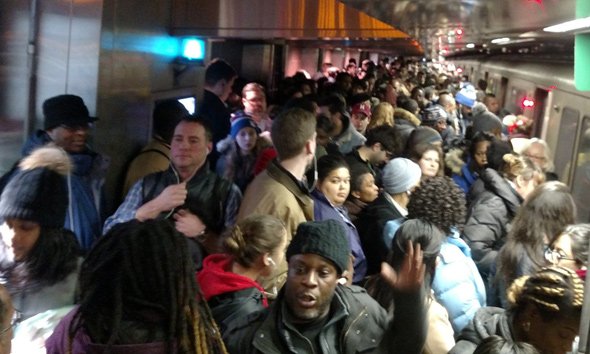 Jam and cram at Charles/MGH.

Midwinter's Wolf reports Charles/MGH turned into a mosh pit this evening when an inbound train died there shortly before 6 p.m. and the T ordered everybody out after another train arrived to push it into the Charles out of the way.

Only the platform was so crowded not everybody could get off the train. Joelle Baehrend reports:

Stuck on a train with doors open at Charles MGH. Platform so packed we can't exit the train. Sick person in our car. Unsafe.

The MBTA reported "moderate" delays as it dealt with that situation. Sarah Marina, at Downtown Crossing shows us what that meant there: And you can only imagine what it was like at Harvard. Just in case you can't, though, S.I. Lydon describes the scene:

Train at Harvard still waiting to move apparently after 1/2 hour because of disabled train at Charles. Tons of folk headed upstairs to wait for the #1. Good times.

Topics:
The T
Free tagging:
Charles/MGH
Ad:
Like the job UHub is doing? Consider a contribution. Thanks!

I waited for an hour on the

I waited for an hour on the train between Harvard and Central. MBTA is a joke. The staff at MBTA HQ should be forced to ride it as a condition of employment. Otherwise it will never get better.

One of the things I loved about Rich Daveys is that he actually rode the T every day. Rode the T for years. Heck, went to school with him (a few grades difference) so our love for the T probably started in earnest in the same time. Of course, back in those days I never thought that there was a problem when you were stuck on the Red Line between Central and Kendall for a half hour. Simpler times for me.

But yes, if the higher ups had to deal with the situations that the passengers deal with on a daily basis, there might be some improvement (the lag time based on the construction of new vehicles notwithstanding.) Or they'd all move to East Boston and Revere, since the Blue Line is a relatively well run line.

Time is money but you never get time back, so...

I know the T needs money but when you pay for this service...?

This was @uber. Those sons of bitches. pic.twitter.com/Vo6s4MVgYX

But it was way easier than that! Totally sucks that we can't have reliable transit on a day that was this warm!

My assumption would have been that this was the best day in weeks to bike, and probably the best day for another week.

Was it really that bad?

Vanished bike lanes. Navigating mystery ice piles and mud messes on certain pathways and getting from path to street where plowing ended for no clear reason. Huge puddles (tgff - thank g_d for fenders!). Walking through mud fields where DCR plows lost the track of the pavement and cleared grassy areas by mistake (they melted down since the morning commute and I had to get off and walk). Contending with pedestrians forced into roadways for short stretches. Not being able to use an underpass on Rt. 16 and having to find my way to the walk signal and lift my bike over a mound to get to the crosswalk.

So, yes, not easy, but warm and still doable. Certainly a lot more productive and satisfying than riding the red line would have been.

I forgot about the water and slush on the road.

'Cuz all that slush has been

Today I found the sidewalks I was on to be clear. And I went from Cleary Square to Forest Hills on foot. The bike lanes are adjacent to travel lanes. If anything, I would think the bike lanes are clogged with cars that can’t park next to the sidewalk due to snow piles blocking the parking lanes.

Only a matter of time

Before someone falls onto the tracks because it is so crowded... :(

Review the above photos and try and find a Transit Cop, Inspector or any other employee. When trouble starts their motto is you ride we hide.

Yikes no wonder Boston is

Yikes no wonder Boston is full of grumps like you Adam. I am starting to see why! I would be too...

How Chahlie Baker is so

How Chahlie Baker is so popular three years after he made much political hay about the MBTA is mystery to me.

He's not batshit crazy and much of the voting population of the state never comes in contact with the MBTA.

What we need to do is get T riders up to the statehouse to block/fill the garage and circle the place and refuse to leave.

That is an excellent idea.

Though Smilin' Charlie probably has a driver.

Secretary Pollack was at a DC conference chumming it up + claiming she successfully turned around the T. Until the fantasy and reality worlds meet, expect more of the same.

How is crowding like this allowed? Shouldn't there be a 'maximum occupancy' rating for the platforms?

We absolutely need more luxury housing along the subway lines and I can't wait for those 50,000 Amazonians to set up shop here.

That's it folks! Chris got his home and his job, he's all set. Everyone else can go screw themselves.

Glad I bailed when I did

I got on at Park at about 5:30, outbound to Alewife. Stopped at Central. Sat there until 6:30, bailed, found a series of buses to more or less get where I was going. Missed an appointment. At least I didn't sit there and waste any more time.

The only fix is to make every single person who works for the MBTA take the T to work every day. On their own dime. No free or special parking. If they're late to work, their pay is docked; if they're late twice, they get written up. Is it fair? Are all those workers causing the problems? Hell, no. But companies that want to offer an excellent product or service do this thing called "eating your own dogfood". Fair's got nothing to do with it, it's how problems get fixed - and on the subject of fair, we customers certainly aren't causing the problem either. So why are we the only ones feeling any pain?

I got to Harvard at 5:45pm because my plan was to go to Central Square...but after the PA announced there was "moderate" delays, I went upstairs and got something to eat, and figured I would take the Route 1 bus to avoid the Red Line.

I went back downstairs and took the train, but by then, it was relatively better. I left Harvard at 7, got to South Station at 7:25, hot footed it to the Needham train, and got to Highland around 7:50.

I've been taking the Route 1 bus in the mornings and with few exceptions there hasn't been a problem. Why the Route 1 bus never showed up could be a mix of (a) severely choked traffic on both sides of the Mass Ave bridge, (b) a warm, wet night where all the stir-crazy people come out, and (c) the Route 1 drivers were afraid they'd be pressed into shuttle service and decided that staying away from Harvard would be the best bet.

Looking at those photos at

Looking at those photos at the top, I actually feel lucky to be a bus-only commuter. I take the 71 bus each morning from Watertown Square and it's quite pleasant. I hope I never have to commute to the Seaport.

I would envision a future where express buses would go from Watertown Square to the Seaport.

Indeed, at some point they

Indeed, at some point they ought to have routes from Watertown Square and Waltham Center(the 500 buses, if you will) that end up in the Seaport as well as the Federal Street.