In a battle between progressives, a forum centered on best way to achieve goals 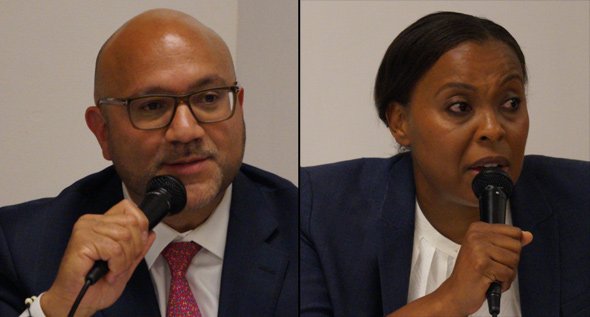 State Rep. Jeffrey Sanchez (D-15th Suffolk) and challenger Nika Elugardo agreed on more than they disagreed on, at a candidate forum in Jamaica Plain last night.

Instead, the two battled over who was the most progressive - and how to best fight for progressive values - in one of the state's most progressive districts, which includes parts of Jamaica Plain, Mission Hill, Roslindale and Brookline. The two met in a room at the First Baptist Church in JP that was so packed people were turned away at the door.

JP Progressives, who organized the forum, have posted a video of it on Facebook.

Elugardo said Massachusetts can no longer rest on its laurels, that we have not truly led the nation in anything progressive for some 15 years now, and that the most progressive district in the state needs a state rep who can help show the way for the rest of the country. "In these dark times, we need bold leadership," she said - and that means a House willing to actively support a state sanctuary law for immigrants, rather than bottling it up.

She said she saw a variety of issues as related and vowed to fight the system in a struggle against structural racism and "intractable systemic problems." As one example of how issues are related, she said climate change is tied to youth violence, because as the climate heats up, so do the streets. "Climate change is a justice issue," she said. And dealing with crime means not just throwing people in prison, but in providing the jobs, housing and counseling that can keep people out of prison to begin with, she said.

She called for term limits on House leaders, saying it's time to show Speaker Robert DeLeo that the people are the true boss, not him. She said Massachusetts ranks near last in terms of legislative accountability and transparency and that a system like that, funded by contributions from big players, is never going to truly tackle problems such as income inequality.

She noted that the three speakers before DeLeo were all convicted of various crimes. "Not being a criminal is too low of a standard" for a speaker, she said. She said the House's current refusal to enact a "safe communities act" that would essentially turn all of Massachusetts into a sanctuary state, a measure passed in the Senate, shows the flaws in the current system.

But Sanchez said he bows to nobody in being progressive, something he said that comes naturally to him, the son of a Puerto Rican who came to Mission Hill in 1973 with almost nothing, who has risen to become chairman of the House Ways and Means Committee even as he fought for same-sex marriage, criminal-justice reform, keeping people in their homes, a $15 minimum wage, health insurance for all and paid family leave - all achieved, he said, by working through the system.

Would he give up his position as chairman of Ways and Means? No way, he said. He said his rise through the ranks shows the importance and value of the experience he has gained as a legislator.

He said he has consistently used his role to fight for what he believes in and said he finds it "hurtful" that anyone could accuse him - and, he said, his family and the JP community - of abusing that trust.

The two differed on some other issues, including:

Elugardo supports raising the current limit for what are considered "juvenile" offenses from 18 to 19 or even higher. She said studies have shown adolescents' minds are still developing even into their early 20s and the goal should be to help them, not leave them with a permanent mark on their record. Sanchez opposed raising the age. He said the new criminal-justice law he helped pass lets people between 18 and 21 petition to have their records expunged if they stay out of trouble. Elugardo responded the problem with that is that it means they will still be imprisoned with hardened-criminal adults before they petition for expungement.

Sanchez opposed elimination of all mandatory-minimum sentences. He said he struggles with the issue, in fact, "I hate the idea of it," but the rise of powerful opioids that killed 1,500 people in Massachusetts last year means he thinks some crimes should carry minimum punishments. Elugardo said she would work to eliminate all mandatory-minimum sentences - as well as solitary confinement, which she called torture. "Our prison system is not set up to help people {overcome] the issues that got them there," she said.

Elugardo supports it, Sanchez opposes it, although he said he is open to studying it. She said it would help increase participation in the system. He said the state has already taken steps to increase voter participation, such as pre-registration of 16- and 17-year-olds.

Elugardo strongly supported this, saying that signing up large numbers of Massachusetts residents for Obamacare is simply not enough, because it still leaves one in five residents unable to pay for many of their medical bills. Sanchez, though, pointed with pride to the 98% health coverage in the state with pride, and said he fought Gov. Baker's proposal to shift many Mass Health members to private lans.

The two candidates were each asked questions that applied specifically to them:

Sanchez was asked whether he has been difficult to deal with in meetings with constituents. He replied no and said he was just engaged in the rough-and-tumble sort of discussion a "super-passionate" JP is known for, that there's nothing personal involved. "This is Jamaica Plain. We talk. We engage."

Elugardo was asked how she would deal with the reality that the system is not going to change the way she wants and that collaboration is still the main way to get things done in Massachusetts. She said she has spent her career working on collaborative efforts - she went back to her early days just out of college when she helped broker a deal over a burgeoning foreclosure crisis between two groups that hated each other - the Massachusetts Bankers Association, whose members called community-housing groups "communists," and those community groups, whose members called the bankers "fascists."

The district needs investment and would be crazy to just now ditch the Chairman of Ways and Means when he controls the funding. Nothing against Elugardo, but her timing is off here.

If he controls the funding

Why isn't he using that power to do the things that he's being called out on?

Well, I am well known

here for my racist comments apparently.

Now this I have to hear.

You don't get it?

The guy that Ocasio-Cortez bumped out sent a latina to a debate in his place.

it sounds like only one of them really is.

I live in the nearby district. I am fortunate to have a choice between legislators who at a basic level make for good legislators.

However, I am overall disappointed with the current class of legislators.

That they allowed Finneran and his successors to become Speakers for Life was a terrible mistake. The senator from my district thought she was above the law where housing is concerned. The representative for my district can't be bothered to acknowledge constituents concerns that she dislikes other than for an bot response.

I say both need to return the real world where there are consequences to not doing their job as well as acting above the law.

I am so tired of having to

He's a careerist within the party - concerned more with his next promotion than the promotion of the interests of his neighborhood.