Judge: Woman had no grounds to sue company over alleged lack of hazelnuts in its hazelnut coffee

A federal judge this week dismissed a lawsuit over the lack of hazelnuts in a local company's Hazelnut Crème Coffee as a whole latte nothing because the woman who brought the suit didn't make a strong enough case on exactly how she was harmed.

Kathy Dumont, a Rhode Islander who said she bought at least one bag of Malden-based New England Coffee Co.'s Hazelnut Crème Coffee in Massachusetts, sued the company in May, alleging she never would have bought the stuff if she had known that "the Hazelnut Crème Coffee contains none of its characterizing ingredient, and instead is both artificially and naturally flavored." In her suit, she argued this is a violation of federal labeling laws and the Massachusetts consumer-protection law, and a marked contrast to the way other coffee companies - and even some of New England Coffee's "flavored" coffees - note their "artificial flavoring."

Dumont sought to become lead plaintiff in a national class-action suit with damages of at least $5 million.

Plaintiff provides no details about her alleged purchase and alleges no facts that would support the conclusion that she was deceived or suffered economic injury.

The company also raised other arguments - such as questioning why Dumont was suing over hazelnuts rather than an alleged lack of "hazelnut creme" - but Zobel limited her ruling to Dumont's weak case in espressing the alleged harm she suffered:

Beyond the allegation that "Plaintiff purchased NECC’s Hazelnut Crème Coffee" and the conclusory assertion that she “reasonably believed that the coffee contained ... hazelnut," the complaint offers insufficient detail regarding the circumstances of plaintiff’s purchase. Without more, her complaint fails to pass muster under the relevant pleading standard. See Fed. R. Civ. P. 9(b) ("in all averments of fraud or mistake, the circumstances constituting fraud or mistake shall be stated with particularity").

This reminds me of another coffee brand - Choc-Full-O-Nuts

Its what I like the morning. Its cheap. Its good.

A few years back, they started printing in really big letters on the lid.

It was funny and sad, both at the same time. Funny because you ask yourself, who are these idiots that think there are nuts in coffee? And sad when you remember 50% of the population are completely stupid.

They have since removed the CONTAINS NO NUTS labeling.

They haven't removed that labeling

Proof: The can of Chock Full o' Nuts we got a couple of weeks ago and have in our refrigerator this very day: 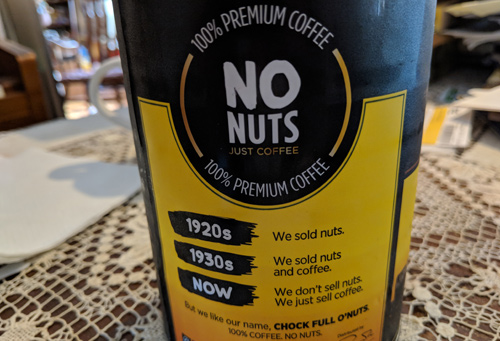 Its not on mine for some reason.

People who buy in bulk are smarter and don't need to be reminded!

Or, maybe different sizes were re-designed at different times.

Or, maybe yours contains nuts.

Also in my fridge. So good. Maybe they put the "No Nuts" to let peanut allergy customers know it's okay to buy.

Although I realize that I am being overly pedantic with this, peanuts are NOT nuts. They are legumes.

How do I know?

My brother is allergic to nuts. No walnuts, hazelnuts, almonds, Brazil nuts etc. for him lest he need a shot wtih an epi pen and a trip to the ER.

He CAN eat peanuts, peanut butter, and anything containing peanuts.

There are people who are similarly allergic to peanuts, who may also be allergic to nuts, or they may safely eat them. It depends on the person.

Peanuts are a legume.

Peanuts are a legume.

I always wondered why it was called that.

I LOVE the text explaining their history. It's very fun, while also being informative. A+ to the copywriter!

You shouldn't keep your

You shouldn't keep your coffee in the refrigerator.

There would be nuts in

There would be nuts in hazelnut coffee. A hazelnut is a nut. I've also seen almond and peanut butter flavored coffee (which isn't botanically a nut, but is considered such economically), and I would expect those would contain their respective nuts in some quantity, too.

And sad when you remember 50% of the population are completely stupid.

Indeed, people who expect a product to actually contain what's on the label are completely stupid. Marketing is nearly 100% legal deception nowadays, and anyone who doesn't know this is an idiot.

What's notable is that this company didn't take advantage of the numerous examples of legalized deception that our modern federal agencies like the FDA and USA have authorized. For example, adding a "-y" or "-flavored" is the legal way to include absolutely no chocolate in a "chocolate" product.

The Name of the Lawyer

Although Judge Zobel refers to the plaintiff in her opinion and it is technically the plaintiff who is pursuing the matter, the name of the lawyer is important. Not only is he/she the person with the education and professional responsibility to bring a good faith lawsuit, an attempted class action lawsuit such as this one is a classic money grab for attorneys.

At least in federal court ...

The lawyer's name is always at the bottom of the complaint. In this case, it's somebody from Providence, aided by a couple of fly-ins from California and Oregon.

Years ago, the night before the Super Bowl, we were in a restaurant in New Orleans, can't remember the name of it, it was a woman's name, probably not there anymore. The place was very crowded. I ordered an entrée called the taste of New Orleans or some such thing, with small servings of jambalaya, red beans and rice, catfish, etc., and shrimp creole. It came, and I noticed the shrimp creole was just sauce, with no shrimp. When our waiter came by, I told him in a meek tone of voice, excuse me sir, but there is no shrimp in the shrimp creole. He picked up my fork, stirred it around, and said, so pretty much everyone in the restaurant could hear, "No shrimp in the shrimp creole? Can you believe that? Man, they will do that to you every time!", then brought over a dessert after the entrée. It was worth it not to get the shrimp, because I always laugh to myself when I think of that waiter, the good natured humor you find in New Orleans.

Yes, this kind of lawsuit me look silly at first, but its purpose is to enforce accuracy in product labeling and advertising. The next time you buy grape juice, don't you want assurance that it came from real grapes?

The purpose of the lawsuit was to make money for the lawyers who filed it.

You are almost right.

imagine what a huge pain it would be if flavored coffee actually had nuts in it?

For home or office consumption, this would mean that due to internal cross-contamination, you could either never have the nut-containing coffee flavors in your home/office or you could never serve coffee to someone with a nut allergy once you've had that flavor. With communal Keurigs and variety-flavored pods, this would be a huge pain.

It is sometimes better to use artificial flavoring.

What was on the label?

I guess I'm unclear, did the label, at that time not say anything about the flavoring?

Just looked on Target.com and they list the ingredients as "100% ARABICA COFFEE NATURALLY AND ARTIFICIALLY FLAVORED". The interesting thing is that the website also says: "Contains: Milk, hazelnuts".

So much for my plan to get rich quick

I was going to sue Post Cereal for a gazillion dollars because there are no grapes in Grape Nuts.

The two bags I have right now say it's artificially flavored, on the part of the packaging that identifies the flavor, which was a surprise, because I've been buying it for a long time, and don't recall that.

I did a Google image seach, and I see a lot of product photos of this flavor that don't have the line about artificial flavor, which is what i remember.

Did the ingredients change, are there different versions with different ingredients, have they been selling non-hazelnut as hazelnut all this time, or what?

Did Boston have them? When I was a wee one and visiting the grandparents in Brooklyn, a favorite outing was stopping at one for a coffee - for the unfortunate parent who got stuck with me, and the most marvelous frankfurters on extraordinary (better than Nathan's) rolls with brown spicy mustard. I forget what else was on the limited menu, but they were all known for their speed, politeness and great food/coffee at inexpensive prices. Hazily, I think it was one of the first franchises open to African Americans. I don't remember any servers being white, and the diners were omnipresent. I wish they still were - they were fabulous - had u shaped counters so that many customers didn't make servers walk far. 1 server per U, and 3-4 U's in a diner? Help me out.

Second local alleged insurrectionist released on own recognizance, but has to stay away from the State House
One Capitol traipser ordered held for at least two days, other released on own recognizance
Malden protesters call for action against fascists
Local Vanilla ISIS rioters traipsed through the Capitol during the failed putsch
Massachusetts fascists who went to Washington are coming back to unwelcome news
Must have made quite the scraping sound