Mother of man shot to death by police, FBI in Roslindale charges authorities planned to kill him in advance

Zoomed in: Incident at CVS parking lot in Roslindale

The mother of a man fatally shot by a Boston police officer and an FBI agent outside the CVS on Washington Street in Roslindale in June, 2015 (as seen in the video above) has sued the FBI, alleging agents and Boston police officers planned to kill him even before he came at two of them with a knife.

In a lawsuit filed in US District Court in Boston this week, Rahimah Rahim charges the FBI's Joint Terrorism Task Force, which had been investigating her son Usaamah for several months after learning he wanted to behead an anti-Muslim activist in New York, knew he had ordered and received the large knife and yet did nothing to stop him before it intercepted a phone call early on June 2, 2015 in which he indicated he had decided to behead some Boston police officers instead and left his apartment in a complex behind the CVS to head for the bus stop in front of it.

On or about June 2, 2015, Defendants John Does (including [the two who shot him]), acting under the direction of the United States, and FBI JTTF unit, willfully, wantonly, maliciously and unlawfully killed Usaamah Abdullah Rahim by approaching Mr. Rahim with the premediated [sic] thought to shoot and kill him.

Rahimah Rahim's complaint quotes from a report by the Suffolk County District Attorney's office on her son's death to buttress her claims:

The defendants, including John Does 1-7 (encompassing [the agent and officer who shot him), knew or should have known that approaching Mr. Rahim in the manner which they chose, with approximately seven (7) officers and guns drawn, enhanced the risk of deadly force, and was contrary to good police procedure. The defendants failed to approach Mr. Rahim in a safe manner. Instead, they approached him in public, with weapons drawn, thereby enhancing the risk and hazard of deadly force.

As a result of the wrongful by agents and employees of the Defendant, United States, events that occurred that a reasonable prudent person would have foreseen in light of the circumstances set forth herein, including the assault, battery, and fatally shooting and wrongful death of Mr. Rahim. The tortious conduct of such employees was a material element and proximate cause in bringing about Mr. Rahim's seizure, assault, battery, and death. Plaintiff alleges that the defendants' actions were not objectively reasonable in light of the circumstances. ...

When numerous law enforcement officers approached Mr. Rahim with their guns already drawn as they approached him, he was in effect seized and excessive force was used during the stop, and seizure of Mr. Rahim.

In the report, however, DA Dan Conley drew a different conclusion, that the two law-enforcement officers were entirely justified in shooting a man they knew planned to murder cops coming at them with "a large, military-style knife"

[Rahim] posed the threat of death or serious injury to the Task Force officers at the time of the shooting. Their use of deadly force was a lawful exercise of self-defense or defense of others and did not constitute a crime under Massachusetts law.

In September, 2016, a Rhode Island man pleaded guilty to charges he conspired with Rahim and with Rahim's nephew on the beheading plot. In October, a jury convicted Rahim's nephew, an Everett resident, for his role in the planning of the attack on Pamela Geller and others.

Is this the same mommy

who did such a fine job raising her son?

That's a bit much

The guy was an adult, not a teenager.

I feel bad for the family.

I really do.
But...seems like he left his house that morning with a plan to 'behead some cops'.
This lawsuit...what if the police hadn't intercepted him and he ambushed a detail cop near a gas co excavation?

Nope. Cops did the right thing here. After all, it wasn't like they mistook a cell phone for a 'large, military style knife.'

Why couldn't they have shot him in the leg or arm and/or tried a non-lethal method first? He wasn't catching them off guard.

He was coming at them with a knife

Some people wont drop after being shot a single time non-fatality. Why take the change, to protect an extremist murderous a-hole?

The answer ib both

JTTF had a right to self defense (if) the man brandished his knife within a certain distance of the officers (and) JTTF's approach made the justified homicide the most likely outcome. It's all in DA Conley's report.

You watch too much TV

That’s not how it works in real life, kiddo.

Because if you’ve ever fired

Because if you’ve ever fired a gun, you’d know how impossible that would be.

And you’d also know that as difficult as hitting such a small area on a moving target like that would be, it’d be SIGNIFICANTLY harder with the added stress of a person approaching you and trying to kill you. Cause you know, stress, fearing for your life, stuff like that that you may have never experienced.

I can answer this one

Shooting someone in their extremities while they're running at you is extremely difficult, and even a shot to an extremity can be quickly lethal.

However, yes, they should have brought tasers, rubber bullets, etc. to what they *knew* was going to be a violent confrontation.

He was less the 15 feet away

He was less the 15 feet away and he was not running. How many shots were fired?

Less than 15 feet away with a knife

is actually *more* reason to go for a fatal shot. Do you have any idea how quickly someone can close that distance on foot?

I'm absolutely not on the side of the police here, but that's dangerously close.

It happened in real life and not on tv.

Is this the same jobless anon posting from his parents' basement?

Who filed the lawsuit again?

No, it's not; I posted from phone during a break at work

Nice try. And if I had said daddy, you would have responded with some bs about male priviledge, 'toxic masculinity'and The Patriarchy. Mommy raised him; mommy owns it.

Guns to a knife fight

Particularly the area which Mr. Rahim was shot, was not reasonable given the circumstances, as he was holding a knife, and not a gun.

I guess the officers should have used their swords instead. 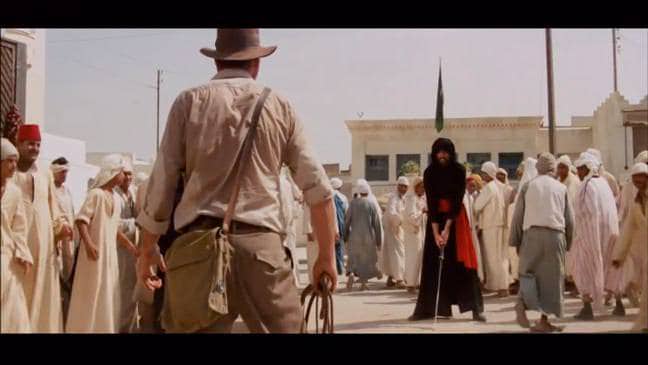 Hate to lay down some Orwell on ya

But it's always been true that in the official cut of this film, the swordsman shot first.

The defendants failed to approach Mr. Rahim in a safe manner.

What is the safe manner in which to approach an avowedly homicidal maniac armed for bear?

As was stated a few years ago

As was stated a few years ago when it happened, the correct course of action would have been to plan out a better time and place to make the arrest than they did. They knew quite a while prior to this that he had a knife and that he had motivation. They had him under occasional surveillance so they knew his habits of movement. They knew where he lived. Yet they still decided to confront him with only 3 officers, none of whom were armed with non-lethal weapons, in a public space with numerous innocent bystanders. There was no specific event to precipitate that confrontation at that time and place. Cops typically don't plan to make arrests like that because of the potential of a quick southern migration. Even if they are doing something like picking up some deadbeats for bench warrants they tend to show up with a small army. They have batons, tasers, and mace with them. They do these things to keep their tactical options open and not get shoe-horned into a life or death situation unnecessarily. It simply doesn't make sense that they suddenly felt the need to confront him right then under such less than optimal circumstances. It had hatchet job written all over it.

The hatchet job probably wouldn't have happened. That is probably the most important part of anything about this incident.

Less than lethal items would not have done anything in this situation except possibly get one of the officers hurt.

Brandishing the knife constitutes valid self-defense, which makes the homicide justified and not a criminal act.

The civil claim of damages goes to the question of prior intent. Did go there to kill him? Or was their procedure negligent in btinging about the circumstances? I think both claims are hard to prove/

A successful outcome for the plaintiff relies on the quality of the evidence and a sophisticated jury that would recognize that both can exist concurrently, a right to self-defense and damages based on intent and/or negligent procedure.

Your argument that they deliberately sent an undersized team to murder someone in public at rush hour is so ridiculous that it proves you started with the conclusion and ignored all logic and reason in order to support it.

Basically what you're saying is that you would more likely believe his death was unplanned if they'd sent an entire SWAT team to his house in the dead of night, and the same thing had happened behind closed doors.

The FBI's Joint Terrorism Task Force... intercepted a phone call early on June 2, 2015 in which he indicated he had decided to behead some Boston police officers instead and left his apartment in a complex behind the CVS to head for the bus stop in front of it.

That is really not specific enough? Honestly, it sounds pretty specific to me.

Angel in the outfield
Court rules BPD detectives did nothing wrong in the way they interrogated a Roslindale teen in Archdale murder case, so he gets to stay in prison
Apartments over Roslindale hardware store win approval; owner will try to put in more parking
New Roslindale restaurant lets you walk right in and ask if they serve crabs
Owner of Roslindale hardware store seeks to add three floors of apartments
Boston petitions: Keep the exam in exam schools, get the city to buy a wooded parcel in Roslindale