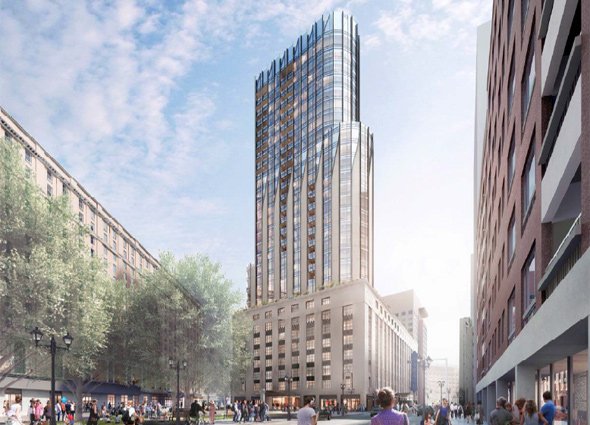 The owners of the Motor Mart Garage in Park Square - once the largest auto garage in the world, with a helipad on top - have filed their formal plans for sticking a 20-story residential tower atop it.

If approved by the BPDA - and possibly the Board of Appeals - the proposal by CIM Group and Boston Global Investors would add 306 apartments and condos while preserving 672 dowdier parking spaces, 528 for public parking and the remaining 144 set aside for residents. The ground floor would gain about 46,000 square feet of restaurant and retail space.

The 1929 garage currently can hold 1,037 cars. Under the proposal, some of those spaces would be converted into 84 new residential units, with the rest in the tower to rise from the garage's current eighth floor.

The existing garage façade has a rich and varied ornamentation that will be enhanced by the addition of residential type windows which by their nature have greater depth than the current single panel windows. The gridded pattern of the windows will help reduce the scale of the large existing windows. This strategy is also implemented into the design of the curtain wall, making sure the scale is appropriate to a residential building. In a similar fashion the precast panels of the existing garage have also been visually reduced by employing a scalloped motif which also allows the sun to interact with the panel in different ways depending on its position. This similar scallop extends upwards into the panels of the tower.

The developers add that "the Project does not cast new shadow on the Boston Common or the Boston Public Garden on
any day from March 21 through October 21," in compliance with the new state law aimed at minimizing shadows on the two historic parks.

Yeah, 18% is more than 13%, but we need Affordable units everywhere in our Commonwealth, not just squeezed into "those" neighborhoods.

The developers add that "the Project does not cast new shadow on the Boston Common or the Boston Public Garden on
any day from March 21 through October 21," in compliance with the new state law aimed at minimizing shadows on the two historic parks.

Haha like that will prevent the wealthy Back Bay NIMBYs with too much money and time on their hands from putting up a stink about this anyway.

Does the residential addition have a proposed name?

Or will they just call it Motor Mart?

Yes, I am dating myself.

I was going to bring up Teddy Bear Arcade!

Even back in the day when I went there (late 80's?), it seemed out of place. And awesome.

For Most of Its New Residents

It'll be referred to as - Tax Shelter.

Looks nicer than most of the boxy crap that gets proposed.

I used to care more when my office was next to that - then my landlords lost their minds so I moved.

Hopefully this gets built, but people are going to have a field day with those shadow studies.

And their Sept 21st, 3pm exhibit looks like they did not include the addition in the shadow? And really all of their shadow exhibits look wrong for a 310' tower?

Not sure I understand your

Not sure I understand your comment about lots of shadow on the Common. The report says "The Project does not cast new shadow on the Boston Common or the Boston Public Garden on any day from March 21 through October 21."

Maybe the commenter is thinking about the December 21 graphic? The Figures start on page 91.

I actually don't have a problem with that.

Have we been beaten into submission by too many horrible tower designs? This one doesn't seem half bad.

On PBS Greater Boston right now (Tues.) they are addressing these luxury towers that are largely unoccupied as they are purchased as investments.

So nothing's changed but the tax revenue

No one lives there right now, so I'm ok with a developer building a bunch of units that get taxed at a higher rate and no one still living there. What's the complaint, really?

I looked through the whole PNF; unless I'm missing something, I can't find the floorplans for the floors that will be retrofitted between the ground floor and the terrace/former roof. Too bad -- I was interested in seeing how they planned to use that space for apartments on the Church St side...

Build it, and ignore the trust fund baby NIMBYs.

The proposed plans show them using the City Park in front as a king of grand entranceway. There are several large, mature trees there (now, in real life), along with concrete landscaping features which would be a hindrance to that plan, and aren't shown in the proposal. They don't think they can cut down trees and co-opt a City Park, right?

Plans also try to justify loss of downtown parking by

Pointing to a lot directly across the street, which is also slated to be developed. I really don't have the time to review all the bs in this proposal but there seems to be plenty.

Turkish salt sprinkler vows to restrain himself on future visits to Boston
Salt Bae's steak place will remain closed through at least Thursday
Salt Bae learns quickly that Boston takes its Covid-19, fire and food-preparation regulations seriously
Boston Arts Commission votes to remove that Emancipation statue from Park Square
Walsh should make sure headless Christopher Columbus has some room next to him in the warehouse for the embarrassing Emancipation statue
Stuart Street steakhouse shuts