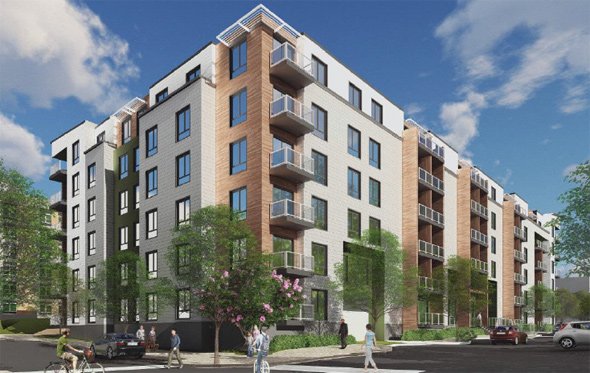 Architect's rendering of part of the new 125 Amory development.

The Board of Appeals yesterday approved two projects that will increase the number of affordable housing units along the Southwest Corridor: Two six-story apartment buildings at 125 Amory Street with twice as many affordable units as required by the city and four two-family houses about a mile to the south that will be aimed entirely at people who could not otherwise afford to live in the increasingly pricey neighborhood.

The board approved plans by the Community Builders, Jamaica Plain Neighborhood Development Corp. and Urban Edge for 287 apartments in two buildings at the site of a current BHA senior project at 125 Amory Street, between the Jackson Square and Stony Brook T stops. Roughly 26% of the units will be set aside for people making no more than 70% of the area median income, as part of a deal with the BHA in which the builders will also renovate the existing 199 senior apartments - and add up to 12 more.

The board approved a third new building with 63 units - all to be rented as affordable - earlier this year. The BPDA has also approved the work.

The board also approved plans by the Jamaica Plain Neighborhood Development Corp. for four two-family homes on Call Street at Carolina Avenue, on land left over from the failed I-95 project in the 1970s and deeded for the homes by the state and city. The people who buy the homes cannot make more than the area median income; their deeds will require them to rent the second units in each building to people making no more than 60% of the area median income. Three of the four units will have four bedrooms.

Construction will be subsidized in part by funds from the Community Preservation Act surcharge approved by voters in 2016.

Several city officials sent representatives to the zoning-board hearing to support both projects. Nobody spoke against them.

Making the other 74% unaffordable.

But I'd wager all units will be affordable to someone...

If you include the previously approved building ...

Roughly 40% of the new non-senior units when the entire project is done will be affordable. Currently, the city requires only 13% affordable units.

This is how gentrification happens.

40% affordable is still less than half. That means the majority of the new people moving in will have more money than the existing neighborhood. That drives gentrification. Just because this surpasses the laughably low affordability requirements, that help explain why boston is one of the fastest gentrifying cities in the country, doesnt mean it is actually good. The bar is far too low.

1) Affordability percentages are limited by the availability of subsidies. Given that this project is being built by a trio of organizations whose mission is to build affordable housing you can bet that they don't need to be convinced that building more affordable housing is a good idea.

Only question I have about this is why did it take so long? It's totally ridiculous to have so many vacant lots in such a desirable neighborhood.

Also wondering about the corner of Call and McBride -- maybe if this gets developed, the sidewalk will finally get shoveled after snowstorms.

1) The financing for these

1) The financing for these types of projects is very difficult to secure.

2) JPNDC, Urban Edge, and Community Builders felt the need to do an absolutely absurd number of community meetings so as to give every last neighbor and resident the opportunity to weigh in on every last detail of the project.

Boston is doing its part to

Boston is doing its part to help middle class people stay in this region with a roof over their head and that is something to be glad about. On the other hand, NIMBYs in the suburbs are doing nothing other than driving up housing costs and sending their drug addicted family members they don't want to deal with in to Boston.

Not just the suburbs

NIMBYs are not just in the suburbs. Many of them showed up to protest even these developments. Edit: Maybe not this development.

From a local FB page in response to the city being designated a Housing Choice Community by the Governor:

Seriously? We need to upgrade and maintain our infrastructure not add more stress to it to ease Boston's housing crisis.

It got worse when I pointed out that our community and others have been adding to Boston's problems for decades - because "the state is causing all the housing problems by putting all the jobs in a small area".

Then they got mad that I insinuated that they were communists ... even though they just claimed that housing and jobs were centrally planned and that land owners have no rights - especially if they are making money from building housing.

Which resulted in I'M A CAPITALIST BUT IT DOESN'T CAUSE PROBLEMS.

Growing up and having change happen and having people do with properties what they legally can is just TERRIFYING!

There are actual traffic

There are actual traffic problems that aren't being dealt with. It's never been a pure market place, there are always restrictions of some, so the way you defined people wasn't exactly true.

When you say “the city” has been designated a Housing Choice Community, you are talking Medford or Boston?

Towns have to pay for their

Towns have to pay for their own costs, that's why there's different zoning. Not all of it is from "NIMBY", there isn't new construction just because of prices, because it's more than just a market.