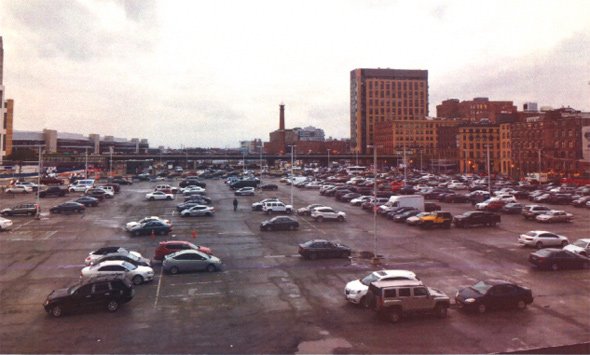 From developer's filing: Prone to flooding.

The new Amazon tower proposed for the Seaport - and a second one that it might have built next to it - would sit on a lot that is prone to flooding and is full of hazardous chemicals left over from its days as a rail yard.

WS Development cites the expensive costs of hardening the buildings against rising sea levels and removing all the contaminated soil in its application to the BPDA for both permission to put up the towers and to get a total of at least $5 million and possibly $10 million in tax breaks over 15 years.

WS, which is erecting the large Seaport Square complex, would put the buildings on what is now one of the South Boston waterfront's last big parking lots, on Congress Street between Boston Wharf Road and East Service Road. In its filing, WS says Amazon has agreed to take most of the space in a 17-story building - with an option to put up a second, similar building on the site. The buildings would have room for up to 2,000 employees apiece.

WS cites these new jobs in its requests for the tax breaks, saying the buildings will help it pay for roughly $20 million in improvements to the area, including new nine acres of open space in a neighborhood that sprouted without much of it, and a new entrance for the Courthouse Silver Line stop and dedicate bicycle lanes on Summer Street and Boston Wharf Road.

But WS also spends a fair amount of space in the document discussing how expensive it will be just to develop the land - just a short walk from Seaport Boulevard, which became part of Boston Harbor in the Jan. 4 storm:

[D]ue to the increase, and the anticipated continuing increase, in sea level, and the increased severity and frequency of storms predicted due to global climate change, additional and costly improvements are needed to prevent the flooding of the proposed structures and ensure that the proposed structure and its systems are appropriately protected from the effects of global climate change and flooding from sea level rise. The specific measures required to protect the Block L4 Building [the first Amazon building] from flooding due to sea level rise and global climate change represent significant cost premiums over conventional construction and include measures such as: builrup ground floor elevation and ramp/building entry configurations; upper-level placement of the building's electric utility vault, requiring expensive structural, HVAC, and life safety systems, location of major building systems on upper floors and/or the roof of the building, requiring longer runs of main utility services, the installation of enhanced emergency building systems designed to increase resiliency and survivability, and the installation of rapidly-deployable flood barriers around the building in the event of a storm event. ...

The grade of the L4 Building will be elevated to be over 2 feet above the 500-year floodplain to maximize resiliency and adaptability to climate change and sea level rise. Key electrical, mechanical, and other building infrastructure will be located above the ground level to further enhance the building's resiliency. The L4 Building will also include numerous other environmentally sustainable features, including rainwater harvesting, a high-perfomance exterior façade, and high-efficiency HVAC and other building systems; a LEED v4 Silver rating will be targeted for the L4 Building. All of these aspects of the L4 Building's design add substantial cost to the construction of the building's structure and systems.

This feels like it could set a dangerous precedent in the city wherein every developer building in possible flood zones (which will be most of Boston in 50 years, less really) will be asking for tax breaks because it's expensive to build flood proof buildings. Or asking for tax breaks to add resiliency measures to their existing building.

I'm happy that they are taking extensive resiliency and sustainability measures, but they shouldn't be trying to get the city to help them pay for it. They just built another massive development, and I sincerely doubt this is a case of not being able to afford resiliency/sustainable measures without the tax breaks.

The only way I'd be happy with tax breaks is if it were a multifamily residential and they were trying to go 50% affordable or something like that.

As an aside I'm also very curious if these measures are in their other buildings or if this is driven by Amazon.

Good point. Building in a

Good point. Building in a risky area isn't something we should, strictly speaking, be subsidizing.

I think it is so funny when Newbies come along and think this is a one off TAX BREAK. EVERY MAJOR building in Boston receives a tax break from the BRA/BPDA. If they were honest about it it would be called the:

We rich developers are going to give the step and fetch it politicians thousands of dollars in campaign contributions and get their buddies/cousins some jobs in exchange for millions of dollars Tax Break.

But because the idiot citizens in the city might start paying attention if the BRA called it that every time they gave a tax break they have this circus of coming up with a unique reason why this particular project needs a tax and/or zoning break. From One Beacon Street to all the towers being built by the Universities to the 121A's every one of substance is getting away with not paying their fair share of taxes. Just like Trump does!

It isn't a tremendous difference and the politicians/developers tout it as 'growth' that is essential to the city. But if that growth in numbers of citizens doesn't include equivalent growth in the tax base then essential service such as the T will start to break down under the added strain. It also exacerbates income inequality (Which Boston is among the leaders in the USA) if everyone living in a triple decker has to pay 100 percent of their taxes due, but everyone living in a new modern high rise only has to pay 80 percent of their tax due.

Of course this will never be explained to you by the political class because it is how and why we have no turnover of elected officials. They get their money from the developers and lawyers for their campaigns. The myriad doctors in the city don't contribute to campaign funds because their livelihood doesn't depend on tax breaks from City Hall.

So, from someone who gets tens of thousands of dollars in tax breaks from the government, thank you for your continued ignorance, thank you for giving Yawkey Way to the Red Sox for peanuts in perpetuity, and thank you for voting for the politicians who have told me personally I'm a 'Job Creator' and I deserve every tax break I get.

Do we still need to give corporate handouts?

Isn't Boston hot enough that companies and buildings will happen even without handouts?

and a new entrance for the

and a new entrance for the Courthouse Silver Line stop

1) The Courthouse stop is cavernous. Really huge if you've never gone inside
2) The Silver Line at that stop really can't accommodate many people.

Whenever it rains, it's packed bus after packed bus from the previous station.

And you can host grand galas and balls. It would be like building the new Logan airport terminal E, only to board waves of 8 passenger Cessnas

Does it even have 1 bathroom

Does it even have 1 bathroom now?

But two! Good luck getting a station attendant to let you in.

Will a women and children first plan of action be implemented as the waters rise and Amazon starts to hand out the Revere Offshore Commander 2.0 - 6 Valise Life Raft™, available for only $2,059.00 + $152.30 shipping or Get $70 off instantly: Pay $1,989.00 upon approval for the Amazon Prime Rewards Visa Card? Tie the tax break to a cleanup

No cleanup, no tax break.

Building flood-safe structures has been part of the culture in SE Asia for hundreds of years.

Hobbesian battle erupts on Carson Beach; numerous arrests made at Revere Beach
Boston Latin School apologizes for student-written descriptions of two neighborhoods
They're cheep-er by the dozen
Motorcyclist dies in early morning crash in South Boston
Upscale craft-cocktail bar with 'a boho setting' approved for Fan Pier
The other disaster at the power plant