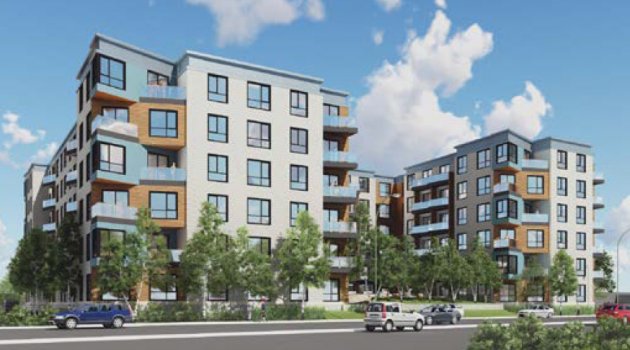 A Back Bay development company this week filed plans to build 211 apartments and 38 condos at 1550 Soldiers Field Rd., near where other residential buildings are already going up.

Dinosaur Capital Partners' proposal, detailed in a filing with the BPDA, calls for 211 market-rate apartments in a six-story building directly on Soldiers Field Road, and 38 condos, all marketed as affordable, in a four-story building on what is now an adjoining lot closer to Birmingham Parkway. The company proposes 202 parking spaces.

The site, now occupied by a two-story office building, is near where the old Black & Decker repair center is now being replaced by an apartment building and the site of a proposed condo replacement for the Lincoln Bar.

And it's not far from the giant New Balance development and its new Boston Landing commuter-rail stop. Dinosaur Capital cites the station, about a 12-minute walk from its proposed buildings, as a reason its proposal is "transit oriented," along with several nearby bus lines.

Dinosaur discusses the basic outline of the proposal:

The Project is conceived as a pair of differently scaled, complimentary buildings, each with a character that respects the neighboring context and the changing nature of the neighborhood. The taller apartment building, overlooking the Charles River, meets the ground with gracious landscape courtyards, and marks the site entry with "rippled" decks at its corners. The affordable condominium building extends a gracious entry and lobby along the quiet cul-de-sac of Soldiers Field Place, and sits to the side of its site allowing generous landscaped gardens and a dog run for resident enjoyment. 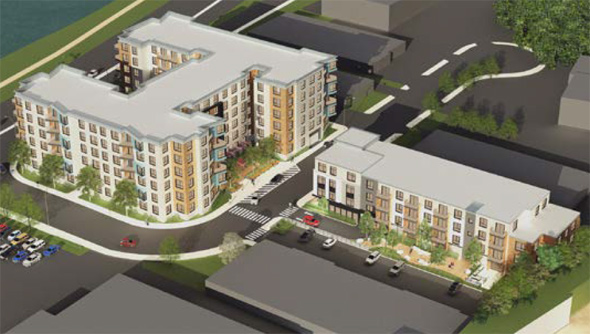 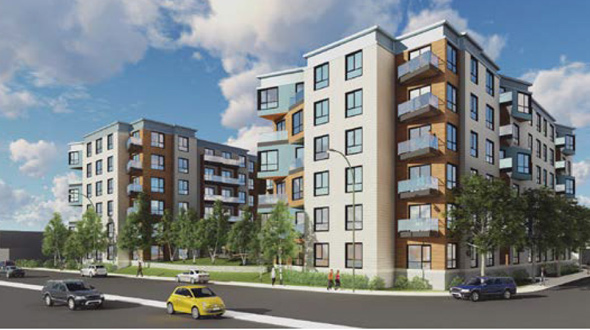 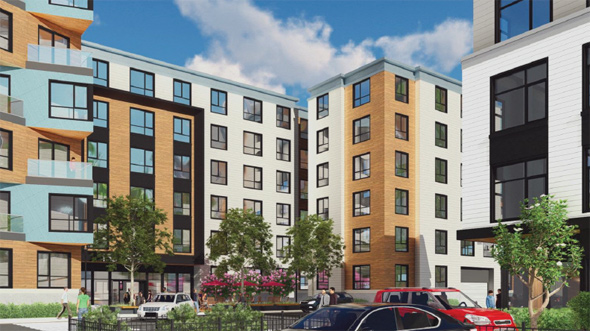 Pahk the cahs in the field. Screw the grass.

They should hire the guy that

They should hire the guy that clips and pastes the trees to do the cars. I counted room for 36 more cars on the road out front to reflect reality.

Should we really call a lot sandwiched between the Pike and Soldiers Field Road a "quiet" part of Brighton?

I'm disappointed the large courtyard faces Soldiers Field road as it probably will be useless green space. I can't imagine many people wanting to spend time next to the high speed and loud road, Charles River notwithstanding.

I think the current orientation means more units can be claimed to have a "river view".

turn SFR into a road, not a highway

We should definitely reclaim our waterfront from high-speed roads.

That runs right between the Charles and Soldier's Field down the road, and people love spending time there. You could say the same about much of the Esplanade too.

Herter Park is public, a much larger space, and is alongside the river. The esplanade is next to the river too.

The proposed space is private, semi-enclosed, and separated from the water by four travel lanes, a median, and an exit ramp.

I'm all in support of more

I'm all in support of more housing no matter what, so build it, but something about the shape, the weird yards, the scale, reminds me of a public housing project. Shame they couldn't have figured out a better presentation, but whatever. BUILD IT

If people want to live there, then it's all good. No NIMBY issues since it's not near anyone else. They should get Dana Hersey to come for the ribbon cutting.

Dubious about the layout...

I'm dubious about one building with 100% market rate apartments, and another building with 100% affordable condos. Will both sets of people really be treated fairly, even though the former can pay more and more each and every month, and the latter are an obligation?

Do you understand how condos work?

If you did, you'd realize the occupants are nobody's obligation but their own.

The affordable condominium building extends a gracious entry and lobby along the quiet cul-de-sac of Soldiers Field Place, and sits to the side of its site allowing generous landscaped gardens and a dog run for resident enjoyment.

"We stuck the poors we're required to have in the back next to the dog shit."

Go to school, learn to design buildings, and offer something better.

Transit oriented? What a joke.

A 12-minute walk (sandwiched between two major and extremely busy highways with no transit) to the new CR station isn't so transit-oriented when there are six feet of snow on the ground, no de-icer down, and its 10 degrees outside.

Green Line to be shut between BC and Kenmore for 12 days for track work and installation of system to keep trolleys from slamming into each other
Baristas at Cleveland Circle Starbucks walk out over working conditions - like water leaking out of lighting fixtures
Citizen complaint of the day: Boston Calling making windows rattle, babies cry for four miles around
Citizen complaint of the day: Dead couch in the middle of the road
Women in Oak Square under attack
Rabbi who survived getting stabbed eight times in Brighton Center opens new rabbinical school