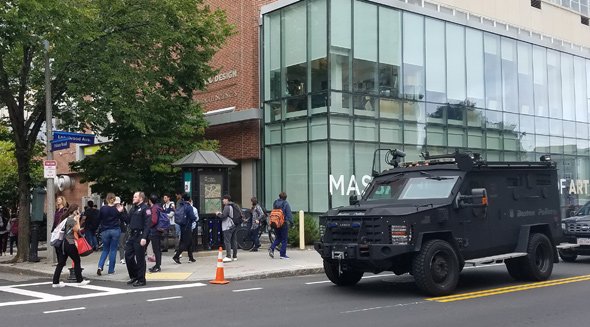 Police shutting down Longwood Medical Area on Huntington Avenue side. Photo by Wepainttheworld.

A report of gunfire around 2:40 p.m. sent Simmons University students and staff rushing into locked classrooms and even closets as Boston and Simmons police rushed to the campus to look for the "active shooter" that Simmons sent out an alert about.

Police, including specially trained K9 units, found no evidence of a shooter, shells or gunfire. But around 3:25 p.m., Boston police officers found several popped balloons behind Boston Latin School, which they determined was the sound of the retorts somebody had reported to Simmons police.

As police, including SWAT units, swarmed the area, Boston Latin itself was put into "safe" mode - students and staff were allowed to go about their routines inside, but nobody was allowed in or out of the building.

Once they found the popped balloons, police began to leave - although some stayed behind to question some Boston Latin students about the balloons.

yikes. Kid is still at school. He texted me to say school is in safe mode.

Harvard also has a dental school

Few people notice or remember, but the Harvard Longwood Campus has 3 graduate schools - the med school, the Harvard T.H. Chan School of Public Health, and the Harvard dental school.

Balloons or buffoons? It could go either way smh

Could have also been balloons

Could have also been balloons and a couple of pricks.

was very fast on this. great job. i got a text from my friend who at time of writing just got a pic from me of this headline because he did not know it was a false alarm

Not a F Troop episode.

Not a F Troop episode.

Now, if this had happened at Logan Airport.

Whew, lucky it was just a

Whew, lucky it was just a balloon popping. It could have been a guy with an umbrella, then we would have had to call in two SWAT teams. /s

I always called massart. Assfart. I thought that it was the official nickname isn't it?

Phew, glad it was just folks

Phew, glad it was just folks bursting someone's balloon. I remember a similar incident where it turned out it had just rained on someone's parade.

How many more Mister Speaker???

I can't help myself

Maybe this will teach me to curb my addiction to bubble wrap...

The city should send the bill to the school for the police OT.

Because someone would naturally think that popping a balloon would cause a lockdown?

an experience you do not want to go through

I was on my way to pick up my daughter when the alert came through. Was a horrible 45 minutes of texting with her while I waited outside and she was huddled in the corner of a classroom.

Glad that it wasn't an actual shooter and everyone is OK, but this did take a mental toll on many of the students - and their parents.

How closely related is the sound of a gun going off to that of a balloon popping?

If it is actually able to be distinguished maybe something could be incorporated into active shooter drills that show people what different things sound like.

What else am I missing?

I have no blades, and I must cool
Shots fired outside Fenway Park on Sunday
Developer files plans to replace the Fenway Star Market with an 11-story life-sciences building
Developer says it's secured financing to build 34-story apartment building across from Symphony Hall that was approved in 2017
Citizen complaint of the day: Boston Calling making windows rattle, babies cry for four miles around
Rainbow after the darkness and storminess