The reason Boston's only round hotel is round 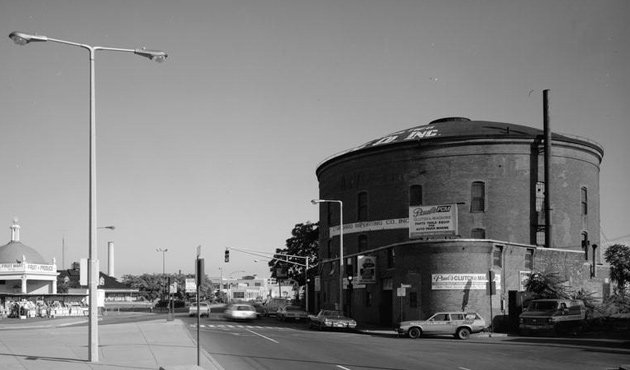 At the intersection of Southampton Street and Massachusetts Avenue are two unusual round buildings. The smaller is the New Market Pizza and Grill, which is perhaps the most ornate pizza place in the city. And the other is a solid six-story brick hotel, formerly the Roundhouse Suites, now the Best Western Plus Boston Hotel.

Its history is a real gas - and its existence an example of the creative re-use of old industrial structures that Boston sometimes excels at.

The Roxbury Gas Light Co. put up a round structure between 1868 and 1873 on Gerard Street, at what was then the southern end of South Bay, to store coal gas, according to a brief history by the Library of Congress. Coal gas was the 19th century equivalent of natural gas - produced by heating coal, it was stored in large round "gasholders" to be pumped through pipes to heat homes and power gas lamps.

Back then, these round gasholders dotted the landscape.

In 1905, the company and several other Boston-area gas companies were merged into a new conglomeration called Boston Consolidated Gas, which begat Boston Gas, Keyspan and now National Grid, and which stopped using the gasholder. In the 1920s, somebody started using the building for a movie house. But that didn't last long and after a spell as a storage facility, eventually the building became an abandoned hulk.

For 60 years, the thing stood there, unused, until Werber Management bought it and hired a local architectural firm, Group One, to turn it into a hotel.

In 2001, Hotel Business chronicled the transformation, which included replacing the three original floors inside with six new floors - and which meant cutting 24 windows for each new floor through 20-to-24-inch thick layers of brick. The company also had to find new bricks that would match the coloring of the old ones.

Unlike the Liberty Hotel, which pays homage to its original role as a jail - its restaurant is called Clink - the hotel does little publicly to play up the building's history.

Photo from the Library of Congress.

And...to complete todays history lesson,the little round building across the street started out life as a Capitol(local Boston gas station chain) gas station.
Then it was Cities Services gas,the prior incarnation of the present Citgo.
Then Merit or maybe Gibbs,then no name until whatever is there now(pizza?)...

Thanks, was wondering about that.

The other round building

I've seen several of these in my travels. I believe there is one in Woburn that may still be a gas station, one in Stoneham was an ice cream place, Malden's has a pizza place, and a couple of others more west of the city.

The roof is domed but the building is octagonal. Apparently trade dress for Beacon Capitol gas stations.

There is a very popular model kit of a station like this for model railroads, but I don't think the roof is domed. Someone told me the prototype for this was in Rhode Island, but not sure if it still exists.

Wikipedia says the stoneham building is on the National Register of Historic Places.

In the 80’s it was used as a warehouse for an importer. I used to work next door at Paul’s Clutch and Machine.

I used to frequent PCM in the Eighties.

If I recall, they had a bunch of old giant clutches and stuff on the floor. I thought they were going in or out, but they never seemed to move.
Hampden Spring around the corner had a coal fired forge that they used to do truck springs. Last time I smelled something like that was at the blacksmith shop at the boat museum in Mystic, Connectthedots.

Run to the Roundhouse, Sally,

We have two of these gasometers here in North Attleboro. The most obvious was built in 1882, now being used for office space, and a second, built in 1865, is used as a garage. The coal gas was stored between a pool of water below and a large, conical mass of metal (brass, as I recall) on top to create the pressure needed to move the gas through pipes to the plants and homes in the immediate area. There are only six of these buildings remaining in Massachusetts. I believe that there's a fully functional one in New York used as an historical museum.

The story I heard is that when these gasometers first were built in the mid-1800s, the public was very nervous about the idea of flammable gas being so close to homes and other building, and so walls were built up around them to hide the works. The conical roofs fit the large pressure cone inside.

Our house was built in 1880 just a few hundred yards from the 1882 gasometer, though there isn't any evidence that the house used gas for lighting.

They were built because the climate and storms in New England could damage the interior structures. In England they were left bare.

Before it was a building

My Father-in-law told me that before it was a building it was the site of D.L. Moody’s religious revivals which were held daily for dock and industrial workers under a huge round tent. I wonder if anyone can confirm or deny this?

Hot coal was blasted with steam in a facility called a Gas Works -- the resultant mixture was called Water Gas,Coal Gas, Manufactured Gas, Town Gas, or Producer Gas depending on the specific details of manufacturing process..

The stuff made in the "Gas Works" was a mixture of combustibles, Hydrogen, Methane [as is natural gas] and Carbon Monoxide*1 non combustibles mostly CO2 and Nitrogen and Illuminants. The latter was result of "Carburetting the raw "Blue Gas"*2 to make it give off a yellow flame for lighting by injecting some kerosene

The gas holders associated with the Gas Works worked by gravity -- you would see their tops rise and fall with demand and production -- no pumping was required.

Even after Natural Gas replaced Manufactured Gas the oderiferant and the Gas Holders stayed for as while in places such as Kendall Square . Now all that is left is the oderiferant which makes leaving the gas on to blow up your house hard -- it also helps the gas company find leaks

There were a bunch of them in E. Cambridge

I used to see them changing height in their cages from where I worked on the 4th floor of the Atheneum Building on First St. That was Cuneo Press back then, in the mid- '60s, and didn't have that statue on the roof. Anyway, the removal of the gas tanks and their replacement with biotech-company buildings was a really dramatic change.

On google books there is a

On google books there is a registry of causes of accidental deaths in Boston in the 1860s. The number of deaths caused by people not understanding how the gas lamps in their hotel rooms worked is staggering. Good thing they made it stinky.

A lingering remnant from the old coal gas

Drip tees. If you look at gas connections, they used 'drip tees'. When a pipe went down, a tee was used with a small pipe below it to catch the coal condensate.
I have no idea, but it might still be in the plumbing code to use them.

Thanks for this Adam, I’ve

Thanks for this Adam, I’ve always been curious about that building!

Missed opportunity not calling it the Gassed-Haus.

Thank you, Adam (and

Thank you, Adam (and followups) for the story on this place.

With the previous hotel name and the building shape, I had always assumed that it had been a railroad roundhouse, leftover from days of yore.

There's a couple of still-visible, long-unused spurs of freight track in/around NewMarket. I figured there had been more back in the day - either completely invisible now or completely removed - and a connection to whichever rail line. With that and the numerous now-gone rail yards that dotted different areas of the city, it didn't seem too much of the stretch for that area to have had a rail yard and a roundhouse.

Firestone had a tire shop there in 1937,myt dad worked there then