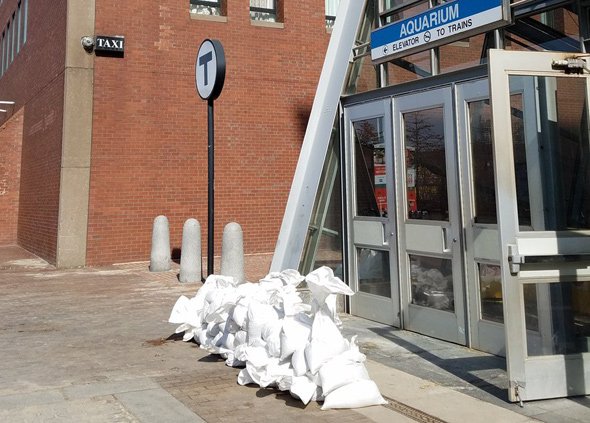 The T is already bracing at Aquarium, which flooded in January. Photo by Jocelyn.

With evacuation requests already issued north and south of the city, the National Weather Service is warning that Boston Harbor could see its highest recorded tides ever Friday or Saturday:

The present forecast is for 15.3 [feet] ... this would put it above 15.13 observed on January 4th and it would be the highest observed tide since records began in 1928 at the Boston tidal station.

Meanwhile, the management at Atlantic Wharf told tenants today they're unleashing the Aquafence:

Severe weather is expecting to impact Boston this Friday and will be
coupled with astronomical high tides causing potential for coastal
flooding in our area. As you may be aware, Atlantic Wharf is
proactively equipped with a mobile flood protection system called
Aquafence.

Due to the pending threat of forecasted coastal flooding in Boston
Harbor, we will partially deploy the Aquafence starting around 11:00am
today and throughout the afternoon. One of the advantages of the
Aquafence system is that it can be installed in phases, thus allowing
us to leave certain sections open and further allowing us to leave our
main entrances and garage open as long as possible during our storm
preparations. Our intent is to leave the main building entrances open
and clear of the Aquafence system until the threat of flooding appears
imminent.

The first actual threat of potential flooding will come at high tide
at approximately 11:00am on Friday, March 2nd. We will have extra
building staff and security onsite throughout the process. We will
watch the tide waters closely and will complete the final enclosures
of the Aquafence only if the flooding threat is appearing imminent.

We anticipate the flooding threat will only occur several hours before
and after the time of high tides. If the Aquafence is required to be
fully deployed, we would break it down to re-open the main entrances
as soon as tides and/or water levels recede.

The next high tide will occur at approximately 11:45pm on Friday,
March 2nd, then again at 12 Noon on Saturday, March 3rd.

All Customers should be made aware, in the event that the Aquafence is
fully deployed and entrances closed:

Occupants in the building will need to Shelter in Place.

Temporary emergency egress paths will be maintained in the event of a
building emergency.

The parking garage will be temporarily closed and vehicles will not be
allowed in or out, no exceptions only while the Aquafence is fully
deployed (i.e. potentially for the 1-3 hour period around the high
tides).

The loading dock will be temporarily closed. All deliveries should be
scheduled to be completed prior to 9am on Friday March 2nd and
Saturday March 3rd.

Security staff will be posted at various locations to communicate with patrons.

We encourage you to plan ahead. While the building will remain open
throughout this storm, we ask all Customers (at your discretion) to
minimize the number of employees in the building and consider allowing
non-critical employees to work from home on Friday. Any planned
visitors should be advised of the situation and circumstances. With
the potential temporary closure of the garage, is it also advisable to
encourage employees not to park in the garage and consider alternative
commuting options.

Im not an engineer, but I am

Im not an engineer, but I am not satisfied that those sandbags will protect the station

Probably should add one or two more bags.

You know, just to be on the safe side.

Presumably the sandbags will be moved up against the doors

and spread out before tomorrow's high tide. But even with that, you have a point - given the tidal level they're predicting.

Seems crazy to me

That a subway entrance right next to the harbor wasn't built with flood doors from the get go. They have to resort to this to keep water out?

They should install something permanent, though.

Has anybody checked the bags

Maybe the bags contain not sand but Post-It notes covered in URLs.

And we'll just have to live with it.

And continue to build in

And continue to build in flood prone areas. Because.

"Just"? No, shoulder-shrugging is not an acceptable response.

Perhaps I misread your tone, and of course we have to deal with whatever weather situations are right in front of us. But I don't think ineluctable resignation serves us well if we want to come through this period of history with the least possible climatic damage.

Clearly we can't avoid a certain amount of f'up'edness at this point, but we certainly can make it better or worse by how we move forward from here.

You mean "adapt to it"

Adaptations are measures taken to protect people and property from climate change. We don't have to just give up - we can do things to protect ourselves while reducing our carbon emissions bit by bit.

Don't feed them - they can grow to at least human size. This landing party must be off-course - usually they target tennis tournaments.

But first, the entire population of Eastern Massachusetts

will be turned into Scotsmen and relocate to Glasgow.

I can't imagine the Scots

In preparations for the possible #flooding in #Boston this weekend, our #AtlanticWharf crew is working hard to install the @aquafence! We purchased #AquaFence (a mobile flood protection system) several years ago as a climate resilience measure to mitigate flood risk. pic.twitter.com/jWNIBzHJ8x

"Hey! Thanks for the new canvass!"

Or maybe that's part of the installation plan ... it will help them put it back together later.

The one on Necco Way that is right along the Channel.

I also got an interesting e-mail from the people who collect pictures of king tides and surge flooding (MyCoast). It basically said "hey guys, wouldn't you rather take some pictures of inland flooding from storm drains and other minor flooding stuff tomorrow because IT MAY NOT BE SAFE along the shorline".

That kind of got my attention - this is an informed enthusiast community, and we were just told to cool it.

Yes I work over there also and we got an email from our building that we may get flooded again (like we did a few weeks ago). I think they were urging offices to close because they did evacuate last time, and some people (at least in my company) were kinda stuck.

If I didn't have like real work to do (that is better suited to do from home so this storm is a blessing for me), I'd go into the office just to see. But I fear I would be trapped in fort point as getting from my office building (near the Channel Center) 'back to the mainland' (to South Station) may be flooded enough that I don't want to wade in 1-2 feet deep water if I decide to go home.

I expected that whole area to have a repeat of what happened in January, exploding drains and all.

Husband's workplace lost power last go around. There is talk of a preemptive power cut by the utilities.

Heard yesterday on another forum from someone who is at the seaport hotel: gosh, I'm here for an event, whaddya think I should do? I suggested leaving now if you don't want to risk being stranded without power, and oh yeah, where did you park your car? She said that the hotel guaranteed the garage wouldn't flood...I dunno anything about the garage, so I suppose that's plausible. I expect she'll have an Adventure, magnitude TBD.

Your intrepid reporter will check in from Hull

Don’t worry. I’m not crazy enough to head there tomorrow.
I live here!

They Make permanent ones...

Deploy it enough, and you’ll see buildings install the ones always in the sidewalk. Labor costs to deploy multiple times each year will make the fence cost eventually justseem like a rounding error.