Seaport Boulevard, Atlantic Avenue live up to their names; flooding all along the coast 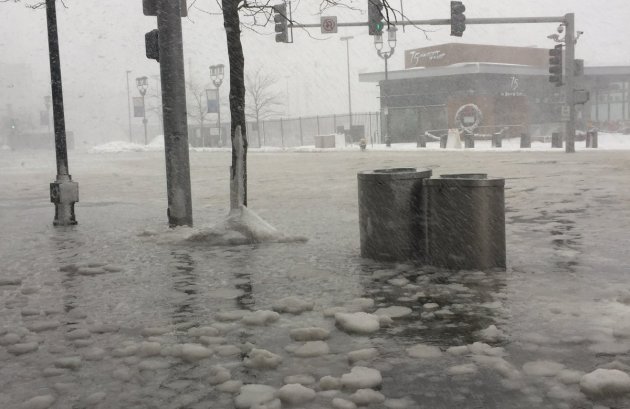 Miss Lippy reports Seaport Boulevard and Northern Avenue along the South Boston Waterfront have flooded and are getting worse. Video.

Entire Fort Point and Seaport is under 1-2 feet of sea water. Parked cars flooded as water bubbles up from high tide. Main thoroughfares as well as side streets and parking lots. A total mess. The parking lot behind the Chart House on Long Wharf has flooded - along with the cars parked in it - Carty Castaldi reports: WHDH reports the Boston Fire Department is using rafts to rescue people trapped in their cars by rising floodwaters near the New England Aquarium.

#MBTA #BlueLine: The Harbor side entrance at Aquarium Station is temporarily closed. Please use the State Street entrance/exit: https://t.co/a9UUPK5Kpi pic.twitter.com/yCcprm0Mwj

In East Boston, cars parked near the new Portside building on Lewis Street are filling with water. Piers Park is under water.

The MBTA shut Beachmont station on the Blue Line because of flooding and halted Blue Line service between Wonderland and Orient Heights. Bennington Street also flooded.

This is getting close to coastal flooding that was observed w/ the #blizzard of 1978; major impacts & evacuations currently ongoing along the E Coast of MA

Someone just posted in one of the Eastie FB groups that Portside at East Pier is surrounded by water on 3 sides, and cars parked along one of the roads there are filling with water. Another post says Belle Isle is flooding in Beachmont, with one of the roads around there being under "3 feet" of water. Getting crazy out there.

Just spoke to a couple of people in Beachmont

They say it's Blizzard of 78 scary in terms of the water rushing in down by the beginning of Revere Beach along Broadsound Ave.

Where houses were moved from their foundations in 78 into the middle of Broadsound Ave.

In Charlestown was just told by BFD to evacuate. There's sea water in the basements of all the houses on his side of the street, including his.

With all the appliances down in most basements and electrical boards still in most, it's not good to put it lightly.

Any word on Constitution

Any word on Constitution Center in Charlestown?

Most likely by the Schrafts building

Medford St., maybe? In Revere's day, that area at the Neck by Schrafft's was under water at high tide. Still a low point and why they are going to raise the road.

Portside had street flooding by the water taxi dock on Lewis Street, certainly not “on three sides”. Yes about 5 cars parked on the street flooded. Portside and it’s underground garage sustained no flooding. Source: I live in the building.

It's the Innovation District!

Surely the hapless and well heeled denizens of Boston's shining white jewel can figure their way out with the help of the ever burgeoning work for hire service industry! UberFloats I believe is what helped them get that big round of Softbank funding!

If you're feeling impatient and cranky, just remind yourself: there will be plenty of time later to be a total dick about this.

And not the people who keep building despite knowing that if Sandy had hit us at high tide that whole area would be destroyed and as anyone who drives down Atlantic Ave these days knows, that's an awful lot of wonderful high priced real estate that would be underwater and have to be rebuilt again.

Proving the definition of insanity.

Kinda glossed over the flooding.

Is it not that bad? I'm seeing videos of 2-3 feet in some places in the seaport.

What's the potential for property damage at that level? Luckily most property owners are forced to keep their infrastructure raised, but that's not going to be the case for the renters / stores at ground level.

Mind you I only saw snipets on news, but he mentioned the flooding, even giving out specific locations.

That was it, and it was on a reporters question. 30 seconds at best.

And what was he supposed to say

Other than note that there was flooding downtown, in the Seaport District, and in Dorchester? Should he have reminded people that they shouldn't ride on floating chunks of ice, too?

Anybody involved in climate adaptation or even just urban planning calls this the Inundation District. Its so pervasive that we all have to be careful not to say it when talking with those who may not be amused.

Who could possibly take issue with such a realistic assessment of the now water soaked little Megacity One?!

Perhaps CLF and the Commonwealth can cut a deal

The Commonwealth will put billions into storm resiliency. And in turn, the CLF reduces or cuts the faulty sections within its Big Dig Mitigation, like the Red-Blue and E Trolley proposals

Is there some other way you can attack the GLX?

You know, the project receiving federal funding that will aid a whole swarth of the greater Boston area.

I do hope you have other hobbies.

Or even right-size the GLX

The original-original GLX was designed to extend to Porter Sq. It was cut back. CLF cut a deal. Perhaps Baker/CLF can trim it down to Union Sq.

Right, except it wasn't

Or course, if you really want to go back to the origins, the Recess Commission, the route was supposed to go all the way to Woburn.

I can't wait for the next thing you make up. It's so exciting.

The original court-ordered GLX was the Medford line. The Somerville spur, ie Union Square Spur, has been a point of contention for decades. However, in order to get Somerville on board, the spur is now part of the GLX. Porter has only been speculation. Without the spur, Somerville removes its support and the line dies ala the Arborway process or through new negotiations

You did a lot at the end. No worries, since that is the only part anon supports.

Yup, you're right. My bad

Marty's Legacy: all washed up

Rising violent crime and his shiney new neighborhood under the rising seas.

Good thing he's got his priorities straight. Sorry that stolen lambo ended up in the ha'bah. Least you don't have to deal with what Dorchester does every night.

You sound like you could use some French Toast or something, or, at the least, something way less bitter to drink than whatever it is you're downing now.

Switching from Harpoon IPAs to something a bit more Summer-y.

Just hope we'll be able to switch back eventually.

It's as if he tased you bro.

Main Street in Charlestown floods, but not with seawater

how to get out

What advice do I give my young friend (first year of work so eager) who went to work at his place of business this morning in the seaport district and now finds all the local streets under water? How does he get out and get back home?

If he's not in imminent danger, at least call local police or fire department so they know someone is there, and follow their instructions. If it's an emergency, 911 as usual. Good luck to him.

RE: How to get out in a flood

Any of them should be able to get your friend to the right services to know that someone is stuck and to come and help get them out. Best advice now, if they are on a high floor, stay there or go to a higher floor until they are contacted by a rescue team. They should not attempt to get out on their own as the frigid, cold waters are dangerous especially as lowering tides will create an undercurrent exacerbated by the high wind.

The rescue lines will be able to advise, and in a newer building, many of them should have weatherproofing backup systems in the event water reaches something dangerous.

Don't have details but Fort Point friend made it home.

Call 911 in Boston even for non-emergencies

It's what the BPD says to do and you'll get a qualified dispatcher that will know what to do.
For future reference.

Make way for ducklings in the North End

Good weather for ducks on a flooded North End Harborwalk.

A few coworkers braved it and went into the office today (I worked from home). 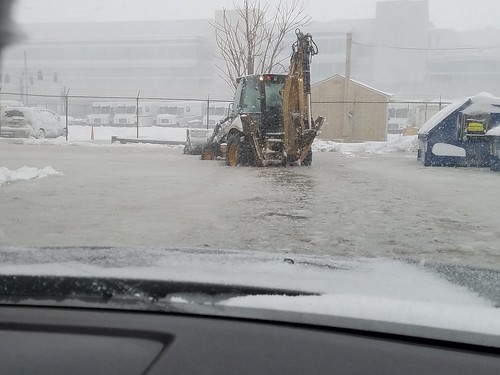 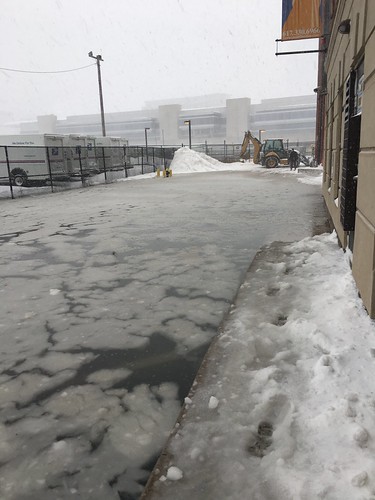 For reference, office is at Tower Point which is near 251 A Street. Looks like 4-6" of water in spots, and we're pretty inland (in relation to other points in FP). But we're also flat with the channel.

kinda wish I had gone into the office to see this ..

One day, several years ago when there was a storm further out at sea pushing more water toward the harbor, plus high tide and a full moon, water was lapping on the Harbor Walk sidewalk near the channel. While streets flooding seems extreme, can't say this kind of event is utterly unexpected.

We were already going to see the usual flooding at Long Wharf and other places because of the height of the predicted tide.

Unlike Sandy, when the surge hit on low tide and just made it look like high tide for over a day, this storm surge came in close enough to that already high tide to push it into the city (and flood many communities in the Commonwealth).

My husband's workplace in Fort Point flooded in the lower level and is without power. If we had gone in today, I would have insisted on him parking in the Channel Garage and not the lot. (see Cybah's photos for more information). Fortunately, we got to stay home - and he will be home tomorrow as they sort out the mess.

Good thing they canceled school or else the cars in the parking lot would've....uh-oh.

Bostonians could vote this fall on whether Eversource should be allowed to build a substation in East Boston
If you have a stolen AK-47 in your apartment, it might make sense not to lob snowballs at cops four floors below, East Boston man learns
State approves controversial East Boston power substation
Rent Prices Are Falling in East Boston - Sort Of
Police say five armed guys were huddled in a Maverick Square courtyard when one pointed a gun at officers, ran, was cornered, pointed the gun again, then slipped in the snow
At least one dead, several injured in one-car East Boston crash