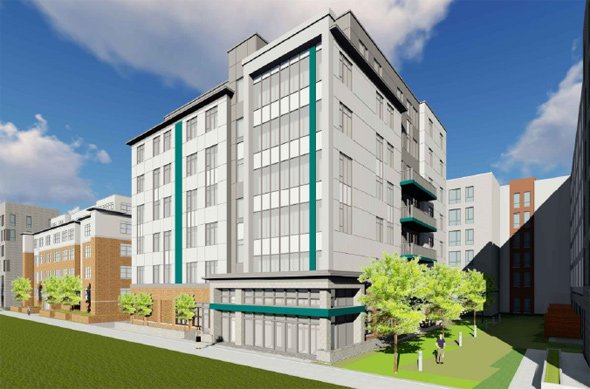 The Board of Appeals yesterday approved a developer's plans to replace a condemned office building on Penniman Road with a seven-story, 44-unit condo building - next to a 36-unit building and surrounded by low-lying industrial buildings slated for demolition to make way for a three-building complex with more than 260 units.

As part of the approval, developers Howard and Jay Hirsh say they will ensure that at least 60% of the units at 30 Penniman Rd. - between Braintree and Hano street, - are owner-occupied rather than leased out or just held for investment.

The mayor's office and City Councilor Mark Ciommo backed the proposal, but both the Allston Civic Association and the Brighton Allston Improvement Association opposed the plans, at least not without further work.

ACA President Tony D'Isodoro said that the seven-story height sets a precedent for that part of Allston to get even taller - he said the association recently saw preliminary plans for a 14-story building at Linden and Cambridge streets, and he questioned plopping a seven-story building on the 26-foot-wide Penniman Road.

Annabela Gomes of the BAIA said her group wanted to see more affordable units in the building, and questioned why 100% of the units could not be deed restricted to owner occupancy. "We have an abundance of luxury apartments and condos" in the neighborhood, she said.

Joe Hanley, attorney for the developers, though, said the project is far from luxury, that there's no way the Hirshes could sell luxury units in what is still largely a depressed industrial area. He said the developers themselves proposed making 51% of the units owner occupied and upped that to 60% as the urging of the neighborhood.

"This location is not Oak Square; it is a very challenging location," he said.

He said that he would have loved to spend more time trying to work out an agreement with the neighborhood groups but that timing just would not permit it. The Hirshes are planning to take advantage of the work being done by the Michaels Group on the larger three-building complex on Rugg Road and that requires them to start work at the same time as the Michaels Group - starting early in 2019.

This is around the corner from https://www.trac75.com/ where studio apartments start at $2,205/month.

Each apartment home is thoughtfully designed, with features including ample closet space, in-home washer/dryers, and gourmet kitchens with Quartz counter tops. Coupled with perks like onsite Zipcars, a roof deck with sprawling views of the Boston skyline, and enclosed parking, Trac75 represents the future of upscale apartment living in Allston.

"Woman shot in the ankle in Allston"

It's not exactly Disney World over there.

Each apartment home considered the size of a studio anywhere else is haphazardly designed, with features including a small cupboard with the title of 'closet', energy inefficient washer/dryer, and mediocre kitchens with some cheap faux marble countertop. Coupled with 'perks' like one zipcar no one will use, a 2 person max roof deck with sprawling views of the gas station and dunkin donuts across the street, and a parking garage with an additional $200 parking fee, Trac75 represents every other bland condo that is being built in Allston.

I could keep going, but yeah, the condos in 30 Penniman are not going to be cheap. (Also, 20 Penniman has had 29 unit deeds and 14 declarations of homestead, so it actually does have a pretty significant population of owner-occupants at those prices).

Maybe I'm jaded or cynical or too close to the Boston arts community . . But this sounds like BS from about 4 different angles.

yes. some of it was 'industrial'. There were many musicians and fine artists there. A high-end woodworking shop (jobs), at least three auto mechanic shops (jobs), a moving company (jobs) nearby.

could it actually be

that only the most jejune sybarites become developers? i would say that is the ugliest bullshit i have ever seen, but i have already forgotten so much.

seems like they are building "smart" cubbies for a generation of tech-weened dweebs that don't actually even exist or have already faded.

are a joke. The city really needs to up the percentage of affordable units. I do like the idea of renting out artist space but it is seriously a pittance in comparison to the amount of artist/studio/rehearsal space all these developments in the area are displacing. I can't wait to take an old friend who has moved away around town in a decade and point out the drab towers standing where Allston Rock City once stood. "HEY SEE THOSE BU GRAD STUDENT? MISSION OF BURMA USED TO PRACTICE THERE!"
Most of all I will miss the bottle/can redemption center on Rugg Rd. I liked those guys.

OH PS- that lawyer is slime.
"This location is not Oak Square; it is a very challenging location,"
Are you kidding dude? The New Balance complex, a brand new commuter station that whisks your potential residents straight to South Station for subway fare, a park and athletic fields, walking distance to Harvard Ave and all the nightlife, plus the 2nd or 3rd oldest DUNKIN' in existence (lol)? OH CRY ME A RIVER, THESE WILL BE SO HARD TO SELL!!!
Hopefully the Mattapan Sq. developers don't hire this guy, he'll be paying people to NOT live there out of fear for their safety!

Barry's Corner in Allston could get Harvard Square-ier with proposed new theater complex and apartment building for Harvard grad students, professors and staff
By Friday, you'll be sick of turkey so time for a Boston ramen crawl
First responders search the Charles for somebody who may have jumped off a bridge early this morning
Starbucks workers walk out across Boston
Family of heart-attack victim who spent 30 minutes stuck in an Allston elevator with EMTs sues elevator company, condo trust and building manager for his death the next day
You can always tell a Harvard man, but soon you'll be able to call him a turkey