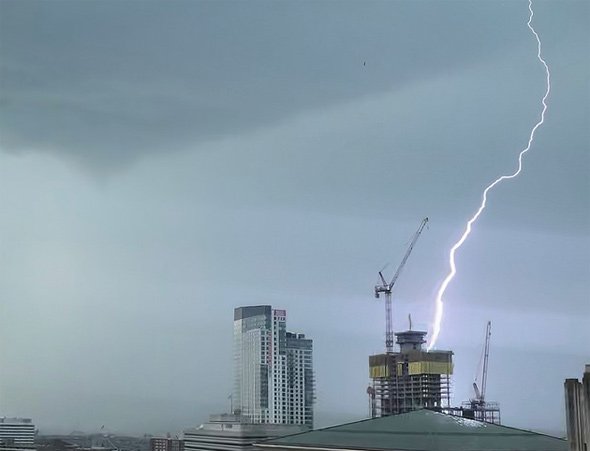 Matthew Ireland happened to snap a photo on his iPhone at just the right instant to get a lightning bolt heading to the ground this evening, only getting interrupted by the tower under construction in front of the Garden.

Why does it travel

in such a squiggly path?

Also known as the path of least resistance.

However here is a brief summary of what happens when you observe or photograph a lightning bolt.

What you are observing is a complex series of atmospheric phenomenon [electrical, electromagnetic, optical, atomic physics, mechanical, acoustic, chemical, etc.] . Each in turn involves a whole bunch of individual events some of which last less than one millionth of a second.

The visible bolt is result of the electric discharge-- much like what you can do to yourself in the winter with some friction [leather soles on carpet, combs and your hair, etc] and a piece of metal such as a door knob which as you get ready to touch produces a bright spark. You have created the same separation of charge [static electricity] phenomenon on a micro-scale which powers lightning.

In the case of lightning a current flows from a cloud to a cloud, a cloud to the ground or the ground to a cloud due to the separation of electric charges. The effective voltages are in the millions of volts.

Due to cosmic rays constantly bombarding the atmosphere some of the atoms in the air are in a state of ionization where some electrons are free from the atoms leaving behind positive ions. Typically due to collisions between the ions and electrons the atoms recombine to be electrically neutral. However new ions and free electrons are being constantly created so there are always a few.

If you can apply a sufficient electric field you can accelerate some of the electrons to move fast enough that if they collide with a neutral atom.they can cause it to become ionized. The classic chain reaction multiplier -- technical term avalanche ionization. That is why people put rubber and plastic around high voltage wiring -- as in free air voltages of 20,000 volts will spark across a gap of about 1/2 inch. This is the mechanism of the classic shock-spark in the winter between you and some unsuspecting doorknob.

Inside the Cumulonimbus Cloud [Thunder Cloud] over small dimensions electric fields [volts /m] exist which are sufficient to cause avalanche ionization producing a conducting channel [streamer] through which a brief current can flow. These currents in turn produce local magnetic fields which in turn apply forces on the free electrons and in effect bend the current.

This process repeats with the effective point of the electric field [charge concentration] constantly moving with the tip of the streamer -- in effect hunting the opposite charge.

Each of the different origin discharges have their own characteristic behaviors and parameters depending on the "ends and the magnitude of the electric field.". The passage of this electric current in turn heats the constituents of the atmosphere in the streamer to very high temperatures sometimes in excess of 10 times the temperature of the surface of the sun [or 20 times the temperature of an arc welder] -- hence the extremely bright brilliant flash of light..

Eventually the streamers make their way from a place with lots of Plus to a companion place with lots of Minus and a Huge Current can then flow to equalize the charges. Sometimes the current flows in first one direction [commonly cloud to ground] and that sets up the conditions for then a larger current return stroke -- often the return from the ground is what we see and catch with a camera. The return current following the squiggly highly ionized and hence conducting path [the "path of least resistance"] whose trail has already been "blazed" from the cloud in the series of micro flashes associated with the individual "leader" streamers.

In any event -- the extremely hot gas [say 50,000 to 100,000 degrees] produced by currents in excess of a Million Amperes [we're talking Gigawatts of power] rapidly expands at supersonic speeds [a shockwave or sonic boom if you will] -- which produces the sound of the thunder.

Since the very hot glowing gas is highly conducting [plasma] there are very large currents and hence very strong magnetic fields and strong impulsive radio wave emission -- hence the "lightning detections" now part of TV weather forecasts. A lot of Ultraviolet light is also emitted by the really "Hot lightning" bolts which do more atmospheric chemistry and helo to ionize the gas outside of the bolt.

Cool under pressure: As cops question her about taser holdup of hotel guest she met on a dating app, woman starts FaceTiming another guy, police say
Boston leaves Common social distancing up to you
Emerson to rent most of the W Hotel for student housing; says it will tell any students who show up with Covid-19 symptoms to go back home
Downtown roof fire does some damage
No more paper penis hats at Faneuil Hall Marketplace
Pret a Closer