Some major dredge work in the harbor 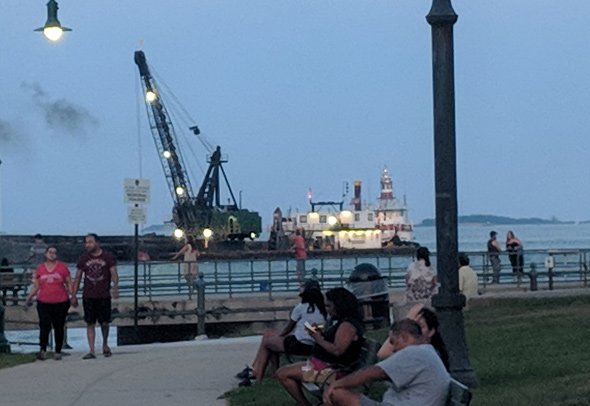 If you haven't seen the dredging going on off Castle Island, don't worry about rushing down in today's heat to see it - a contractor will be dredging a channel through Boston Harbor for the next three years, so you have some time.

The point of the work is to make a channel deep enough for so-called Panamax ships - big enough to just barely squeeze through the newly enlarged Panama Canal - to get to and from the Conley Terminal next to Castle Island.

The Army Corps of Engineers signed a $122.2-million contract with a contracting group headed by Cashman/Dutra of Quincy earlier this year for the work, which will involve removing "11.7 million cubic yards of silt, blue clay, till and weathered rock" to create a channel at least 47 deep from the Reserved Channel out to President Roads - which is basically the entrance to Boston Harbor from Massachusetts Bay (more detailed map - from the last major dredging project, in 1986, which included deepening a channel all the way to Chelsea Creek).

Most of the dredged stuff will be hauled out to a point about 20 miles offshore and dumped there.

Before the work could begin, the Army Corps of Engineers and Massport, which owns the Conley Terminal, first had to deal with an Eversource power cable out to Deer Island that might have been sliced by the dredging.

The two agencies sued Eversource and the MWRA because the then Boston Edison didn't bury the cable deep enough when it installed it in 1990. Eversource last year agreed to lay a new cable - away from the Reserved Channel and the deeper channel the contractors are now creating.

Why did you have to dredge this topic up? Was the Globe not providing deep enough coverage for you?

You're a real bottom feeder,

You're a real bottom feeder, coming in here with that silty mouth.

If they stabilize the dredgings

Would that be Fake Mews?

I got the Dredge Report instead.

I will say this, as an occasional taker of the Hingham Ferry, the slowdown to 0.0001 miles per hour going past this is a commuting buzz kill.

That ferry leaves from a

That ferry leaves from a very interesting area , for one,

Don't need to crane my neck

Don't need to crane my neck to watch them barging in here.

I'm so glad Adam got this scoop

I really dig all these puns

You could at least try to

You could at least try to channel some civility.