They're the ones for you, New England, New England Telephone (even before the Nynex family) 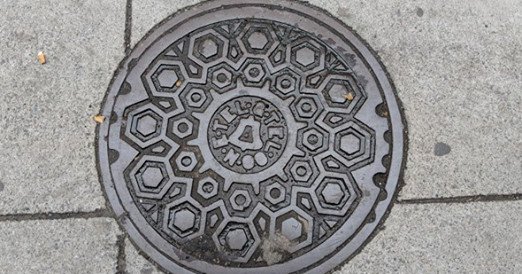 For the most part, Boston's history is best viewed when looking around or up. But sometimes, it pays to look down: Places such as downtown, the North End and Chinatown are filled with remnants of our commercial past, in the form of manhole covers.

A common sight around Boston are Bell System manhole covers, from back in the day when there was one national phone company that connected all of its regional subsidiaries (all, of course, stemming from the work of Alexander Graham Bell on Court Street).

But on Essex Street in Chinatown, next to the Verizon switching station that dates back to Ma Bell days, you'll find a couple of manhole covers proclaiming the existence of the New England Telephone and Telegraph Co., which dates back to the late 1800s (see this 1889 directory - 9M PDF).

Kids, Here's the reason for the headline. In 1908, the Massachusetts Highway Commission, which regulated telephone and telegraph companies (naturally) in the state, ruled the association was not subject to state oversight because it did not conduct the "intelligence by electricity" the legislature had decided to regulate - it had no switchboard or any other equipment, it just provided private connections between stockbrokers (you can see the finding on page 145 of this report - 13M PDF). Remember when utility companies had names that told you what they do? The granddaddy of today's Eversource was the Edison Electric Illuminating Co., established in 1886. In 1924, the company started its own radio station (see if you can figure out the call sign before clicking on the link). Before National Grid (before even Keyspan and Boston Gas), Bostonians got their natural-gas service from Boston Consolidated Gas, which got its start in 1905 when the New England Gas and Coke Co. of Everett acquired a series of gas companies in the Boston area and consolidated them all into a single entity (among the companies it acquired was the Boston Gas Light Co., founded in 1822, originally to supply gas for lighting). In 1955, the company changed its name to Boston Gas. Before the MWRA and the BWSC, we had the Boston Water Works. Not all the manhole covers for companies that no longer exist are that old. Downtown is full of covers over fiber-optic lines run by companies started up just before and after the breakup of AT&T, including MCI, MFS McCourt and Level 3.

H/t Spencer Haugh, Lassie Maven, rst and Matt England for the leads on what "BLTWA" meant. And a doff of the hat to GerhardM for his suggestion of "Big Long Tall Wide Anacondas - do not open."

Now I have another reason aside from my cell phone to be distracted when walking. Or driving ;)

Jingle, for the young 'uns.

Jingle, for the young 'uns.

Hi! And welcome to Manhole Week on UHub! All your burning questions about manholes answered! All the top manhole news you need to know!

There are also still plenty

There are also still plenty of of BERy (Boston Elevated Railway Company) manholes out there that are owned by the MBTA.

And here's one (and some others)

Roslindale residents can see a BERy cover next to the old trolley substation on Cummins Highway.

The thing to remember is... yeah we see this covers now. But you know the streets, sewers, and cabling was done with 18 or so years so yeah.. construction people are just recycling what they have.

If they replaced covers, we wouldn't see BERy and other companies that went out of business eons ago.

The power station on Beacon Street in Kenmore (with the Kyrie billboard across the street from the Lourdes center) also has the Edison Electric Illuminating language.

I've noticed a couple of others over the years.

Mainly for electrical covers. Historically, they're for MassDPW, MassHighway, and now, MassDOT. You can see them all scattered througout the region. The lights on the newest part of the Somerville Community Path (Cedar to Lowell) all have the MassDOT plates next to them. I believe that most of the electrical plate coverings in Davis Square are MassHighway. I think you can find some other ones for the DPW around Union Square, but I haven't paid close enough attention to them recently to be able to accurately recall where examples of these are specifically.

based in Arlington, is an addictive instagram account. They seem to focus a fair bit on Somerville, but do do cameo shots of covers in other, more exotic locales.

I'm always looking out for these things, now.

Has anyone ever been inside

Has anyone ever been inside that Verizon museum of telecommunications, with the mysterious sign above the closed entrance to their building on Cambridge Street?

...the most amazing manhole covers are in Japan.

I hadn't realized how often I'd wondered what BCG Co meant.

Ringing in the new year in Chinatown
Man charged with raping woman at Chinatown hotel, holding her there for ransom
Man charged with punching two Asian-American women in the face in Boston; was already locked up for attack on elderly woman in Cambridge
Man robs Chinatown bank with a spray bottle, police say
Masshole parks in bus stop, bus pulls up ahead to let off passenger in wheelchair, Masshole can't wait, drives over wheelchair ramp, police say
Beaming at Chinatown's newest school, now under construction