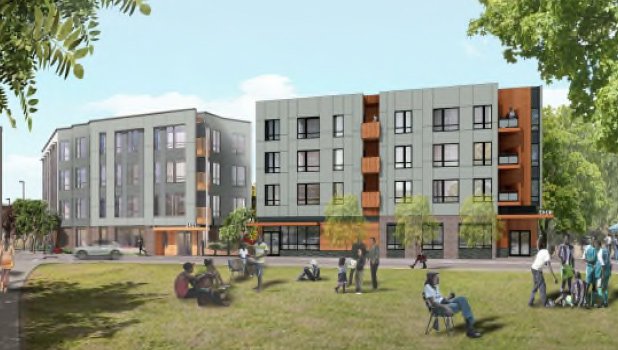 The Madison Park Development Corp. this week filed plans with the BPDA to use both land it owns and a city-owned vacant lot for a four-story, 20-unit condo building at 75 Dudley St., at Guild Row - next to another condo building it is currently constructing.

The plan calls for no parking, partly because of the expensive of providing it on a small lot, partly because Madison Park says on-street parking is not an issue there - and because it will make available some spaces for rent in lots at adjoining buildings it owns. The building is about a quarter mile to the Dudley Square bus station.

The design of the building will be of a modern aesthetic that complements the architectural character of the neighborhood, contributes to the identity of Dudley Square, and considers the historical and social context of John Eliot Square. The base of the building will continue the brick materiality of the adjacent streetscape walking along Kenilworth. Meanwhile, the massing of the façade is broken into vertical proportions to reflect the smaller scale of the row-house bays further down Dudley Street.

Madison Park hopes to begin 15 months of construction in August, 2020.

Why can't we get affordable housing

in Dorchester or Southie?

really too bad it's only 20 units

push it to six stories (max for stick-on-podium) and you could get thirty. make the additional units market rate and you wouldn't need so much subsidy. Yet: shadows! gentrification!

at least there's no parking. I appreciate Madison Park's tacit admission they've been building way too much parking at their developments and have plenty to spare for nearby new units.

But why would someone outside

But why would someone outside ami limits want to buy ?

There's nothing wrong with vehicular parking

it cuts back on the number of ride sharing vehicles driving around aimlessly. Better for the environment.

From Brownstones, to Townhouses, to Tic-tacy looking apartments/condos. Boston is going downhill architecturally speaking. What's with all the dreary gray these days?

Harvard medical, dental students sick of honor given to Oliver Wendell Holmes, Sr., onetime medical-school dean and racist
Man shot to death on Adams Street in Roxbury
Man admits he was leader of violent Latin Kings chapter in Boston, the one that included the BPS counselor who shot a student in the head
Nubian Square gets one of those block-long Black Lives Matter murals
Two shot on Dunreath Street in Roxbury
Driver races away from police, rolls over, crashes into light pole, runs away without helping seriously injured passenger