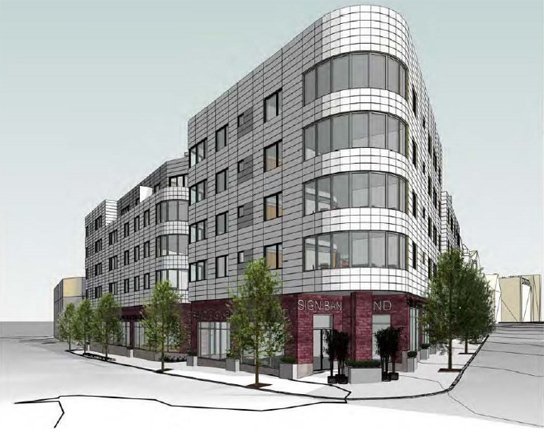 Architect's rendering. Are those earthquake cracks?

Developers have proposed replacing a small, single-story block of stores at 267 Old Colony Ave. with a five-story residential building with first-floor commercial space - across Dorchester Street from the much larger Washington Village project now under construction.

The proposed Trimount Place would have 30 one-bedroom units and 34 two-bedroom units, under the plans filed last week by developers Michael Moore, Joseph Allen, and Seamus Moore, who have worked on other South Boston projects under the name Oranmore Enterprises. Eleven of the units would be affordable.

The name is an homage to the original name for Beacon Hill, Trimount, which refers to the three hills that were there before settlers dug up two of them - back when most of South Boston was under water and the rest was part of Dorchester. The name survives today in Tremont Street.

The building, designed to represent "a civic minded steadfast building," would have 61 parking spaces and a storage room for 64 bicycles at its site three blocks from the Andrew Square Red Line stop. The roof would feature a "pet relief area," community gardens and "drought tolerant buffer plantings."

They add the building's design speaks to the surrounding area architecturally:

The main body of the building is clad in both smooth and textured terra cotta tiles which speak a masonry vocabulary and a civic minded steadfast building. ...

The Terra Cotta exterior sheathing on the main facades is to reference a grand civic building that would reference a masonry heritage and long-lasting presence. The exterior material changes as it turns the corners towards the residential neighbors. This would be a wood grain fiber cement panel, a friendly natural looking material.

In addition to the BPDA, the Zoning Board of Appeal would have to approve the proposal. Because the project is over 50,000 square feet, the BPDA has set up an impact-advisory committee to review the project and public comments on it before the BPDA board votes.

The developers have already had some meetings with nearby residents:

Local civic groups have expressed the strong interest in having a restaurant, coffee shop and other local retail businesses on this site to enhance the neighborhood with a pedestrian friendly streetscape. Street trees, landscaping, and bicycle lock up locations would accompany the ample sidewalks that would adhere to the City’s Complete Streets dimensions, these elements would help keep the sidewalk at a pedestrian scale with a sign band above the first-floor commercial storefront to appeal to passing vehicular traffic.

The developers hope to break ground this fall, with construction expected to take 18 months.

Once they get the cost estimate in it's unlikely to remain terracotta. What is up with those curved corners? Faceted curves look like a**.

The program that model was built in literally cannot do curves. But yea if you thought terracotta was expensive, try buying big custom molded corner pieces. Not to mention curved glass is $$$$$$$$$$$$$$$$$$$

The name is an homage to the

Those lines are contour lines

Those lines are topographic contour lines. It's a weird choice to include them on a rendering, but that's all they are.

This luxury building will be less aesthetically pleasing than the public housing across the street.

I don't care much. It should be built taller to support the retail space it brings. That said, retail in the area tends to not do well in such a mixed income area. Won't be enough traffic for, I think, for even the requested coffee shop.

Not my old blockbuster location!

Who writes this stuff?

LOL, that's some really subtle marketing. What the hell is a "a wood grain fiber cement panel" and what can I expect from its friendship?

does not show the panhandlers at the intersection.

Straight out of the Bauhaus with perhaps a nod to the Wiesner Building at MIT.

Note the Media Lab extension under construction at the time -- E-14 designed by Pritzker Prize-winning, Japanese firm Fumihiko Maki & Associates as a homage and partner to E15

When I was a kid I would

When I was a kid I would visit my grandmother on Pilsudski Way and that location was a Jolly Donuts. Later, when I was an adult in the 1980's there was a D'Angelos on that location. I always went in for steak and cheese subs. Every once in a while I pass through on my way home to Cambridge and notice the site has been vacant for a long time.