Another driver plays whack-a-pole on JP's own raceway 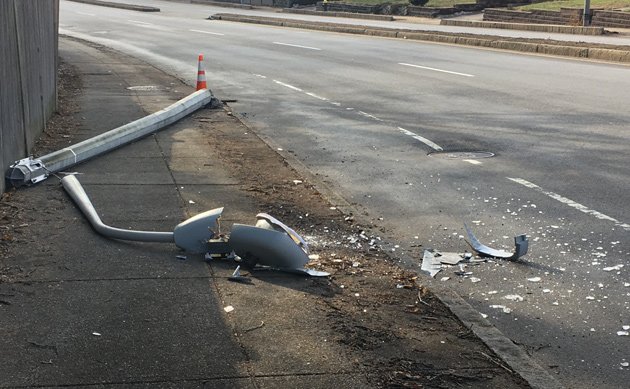 A roving UHub photographer chronicles yet another smash-n-crash involving a light pole along that stretch of Centre Street that connects the Jamaicaway and Arborway with VFW Parkway.

I guess the road o’ doom for light poles leads to the circle o’ doom (Murray Circle). Probably happened late Thursday/early Friday morning on Centre St., just down from the Louders Lane intersection but on the inbound side. This doesn’t include the light pole arm that fell off of a pole in front of 1090 Centre two months ago.

That reminds me -- I need to

That reminds me -- I need to complain to the DCR about the ridiculously dangerous shrubbery in the middle of Murray Circle. It would be dangerous enough without giant overgrown bushes which reach all the way to the curb, completely blocking the view of traffic coming around the rotary.

See, this is why cyclists should be licensed and insured and registered. We do this for drivers and it keeps them from causing mayhem and property destruction

What the hell are the cyclists doing biking on the road?

1. You responded to sarcastic bait.

2. The riverway and the jamaica way does have a path, although some of it is marked no cyclist.

The best design is 2 paths that are marked for cyclists and pedestrians.

You've got a point, cinnamongrrl, but

all sarcastic bait and kidding around aside, both the Riverway and the Jamaicaway are extremely dangerous roads to cycle on, due to the fact that there are so many hard curves on both of those roads, and the fact that people drive so fast on them.

This in on Centre St. going towards Faulkner Hospital.

Not on the Jamaicaway or the Riverway. There is no separated bike path.

This is on Centre St. going AWAY from the Faulkner.

Yes the pole is on the inbound side

of that portion of Centre that is between Murray Circle and Faulkner.

Didn't mean that the pole was on the outbound side, just identifying the correct part of Centre St. and that there are no separate bike paths on either side.

That's a huge part of the problem, right there.

It'd be perfectly safe if

drivers actually went the posted speed limit. The fact that it's not safe is not a reason to ban cyclists; it's a reason to add enforcement and redesign the road to slow down cars.

No it wouldn't. It doesn't

No it wouldn't. It doesn't matter how slow I go if I can't see cars coming around Murray Circle when I'm stopped at the yield sign, due to shrubbery obstructing the sight lines.

and on the next block (Arborway)

Oops - meant to include this photo:

And now non drivers will pay

And now non drivers will pay to fix it via property taxes because Boston drivers ruin everything and refuse to pay for anything.

Whatever work that orange cone is there for, I’m upset I have to partially pay for it. I never even walk on THAT particular sidewalk.

Can I come over and break all your windows and not have to pay for it?

Your logic is faulty here. This is damage that is caused by a particular driver and needs to be paid for out of that driver's pocket. This isn't a public works project.

But that wasn’t Kinopio’s sentiment. The entire point of my response was to be just as absurd.

I did this once

I spun out on black ice in Watertown and hit a light pole. I did stay and speak to the police. In fact they made me take an ambulance to the Er. I was ok but my car was totaled. The light pole didn’t fall, bit it was just rebar and wires. I disputed fault and and won because of the black ice. The reason I note this is that Watertown never contacted me about the light. The state didn’t either. Insurance took forever to settle the various bills, but the damage to public property never came up.

To be clear what you describe is what should happen and I remain surprised that in reality no government entity pursued reimbursement. I had comprehensive insurance, I fought the points but I had enough insurance to cover a loss.

But the insurance process is different

In the end, Watertown may have gotten money from your insurance company, which is the point of their being. You had black ice to support you against a surcharge. This driver may not have that, so the rates will go up most likely.

A month after getting my license, I rear ended someone. Seemingly no damage to the cars, but as the responding cop noted, “this guy is going to try to pull something.” And note, I was completely at fault and admitted as much. Basically, the cop was pulling for me. Whatever he got from insurance, I don’t know. I only saw the hefty surcharge, which I was in no condition to fight- I was reading a map while slowing to a stop light.

Just because you got a surcharge doesn't mean that the guy even made a claim.

It just means the accident went on your record.

What I despise is how the MA system is designed to charge people like my husband and I, who have made no claims for decades, a huge pile of money that mostly subsidizes the driving habits of people who need to pay their share. I would love to pay by the mile, too.

That’s what insurance is there for, so when one has a crash, they don’t have to bear the entire cost. That said, those affected will try to get compensated, but the insurance company is the one to contact.

Did you pay a deductable?

I mean I understand that yes the insurance company handles everything, but they always told me what they paid out. There are probably records of this stuff too.

The deductible applies to costs of repairing my vehicle, while the only issue I would have had would be if my coverage for damage to others was too low to cover those costs (it was high, I want to say $1 million in the early 1990s.)

The damage wasn’t that great. I busted a windshield and there was some repair work needed later to the car, but nothing too bad. These were two old American cars hitting at low at most 15 mph) speeds.

I agree with this

Once at Pleasant and Dot Ave, I tapped a car on my right his left that was passing me while I made a right turn. He got out of the car yelling, and I was flummoxed as to how this happened. I was just standing there and 3 plainclothes police officers walked across the street, took down all of our info and sent us on our way. I was surcharged, but no claim was made. Thank god, I was as slow as I was bad at driving and no one was hurt in any of these incidents.

That guy who was passing you on the right

while you were making a right turn was not only a total imbecile, but he was doing something illegal, to boot. Glad you were not hurt. You handled it very well.

Nope. Your SDIP rating only

Nope. Your SDIP rating only goes up if you're at fault *and* there's a payout above a certain amount -- $500 I believe.

It will also go up if you get a moving violation.

Ouch! Oh, my god! Glad you were okay.

Black ice can be extremely hard to see, especially if one's driving at night. Glad you were okay and not injured.

This happened to me 50 years ago this past March, when a friend of mine and I were driving home from a Young Rascals (the name of a 1960's rock-n-roll group) concert, at Boston College, in Newton. I was driving along Commonwealth Avenue, in Newton, when all of a sudden, I skidded, spun around, and ended up in a snowbank. My friend and I were both okay, and not injured at all. My mother's 1963 Buick station wagon was okay, but it was a rather scary experience, overall. I had to go into a house to use their phone to call my parents, at around midnight, and the people of the house were nice enough to get me out. I was rather new as a driver (I'd just gotten my license in December, at around Christmastime), and not very experienced. I was just a high school Senior back then, and rather green, if one gets the drift.

I learned very quickly to be more careful, and have not had any skidding accidents since.

And now non drivers will pay to fix it

Uh, that's the way taxes work, pal. We all pay for services we never use or never hope to use.

I think what you are missing here...

Is the distinction between, on the one hand, the cost of public services (for example the paving of the road and the initial installation of the light pole), which of course we all pay for through our taxes, and, on the other hand, the cost of repairing damage done negligently by a specific individual, which should of course be paid for by that individual.

That distinction is not made, though

Kinopio did not make that distinction, though. Even drivers, in addition to non-drivers have to pay for the damages of that individual.

How does the financial

How does the financial situation of the repair have to do with drivers refusing to pay? It's not like our legal system consists of the DCR asking the driver to please pay, and the driver shouts, "No!"

If you're a streetlamp

"You've got to understand, cars are going to hit you."

Despite massive state payrolls and private tow fees, the road, the sidewalk, and the "grass" strip separating both have all kinds of debris and dangerous hazards that could lead to injury and/or another accident. Tow companies are required to sweep the roadway and remove debris (at significant cost to the driver's insurance company) while whoever is in charge of the pole should have at a minimum, moved it to the grassy strip and cordoned it, removing the whole thing or at least whatever parts aren't salvageable. DCR/DOT have 24/7 on-call cleanup staff. I'd be curious if the tow company charged the insurance company for a cleanup and whether the new MSP brass approve of leaving the roadway and sidewalk like this. Deplorable.