Apartments, condos approved as replacement for parking garages, lots on Kilmarnock and Queensberry streets in the Fenway 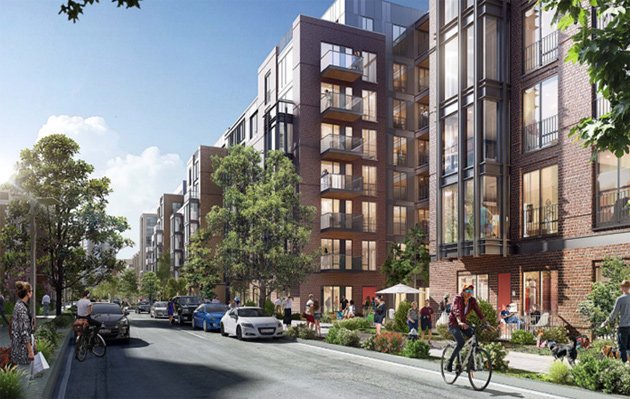 The Zoning Board of Appeal this morning approved a plan by developer Cabot, Cabot & Forbes to build 440 apartments and condos in three buildings on Kilmarnock and Queensberry streets in the Fenway.

Each of the buildings would be eight stories.

The three buildings would have a combined total of up to 210 parking spaces in underground garages. Construction would mean the elimination of about 300 parking spaces now used for parking during Fenway Park events - which the developer points to as a benefit because it would reduce traffic in the immediate neighborhood.

The mayor's office and the Fenway Community Development Corp. supported the proposal.

Monty Gold, owner of the neighboring Restaurant Row, opposed the proposal over concerns about an alley between the two parcels being blocked during construction. Cabot, Cabot & Forbes agreed with a board request to try to iron out a resolution with Gold.

The BPDA board approved the project in January.

I'd rather have more units

I'd rather have more units than parking spaces but still a good plan.

And this right here is why

And this right here is why delaying today's ZBA hearing was a bad idea as proposed by Councilor Wu and others. A project with near unanimous community support, replacing a parking garage, and adding desperately needed housing. This project would have been bumped back on the agenda into winter if today was postponed, they're scheduling months out. Instead they can hopefully break ground this year.

A project with near unanimous

A project with near unanimous community support

It didn't have anything resembling unanimous community support due to the project being scaled up in violation of zoning to pay for offsite affordable units in the South End while the Fenway got virtually no subsidized units onsite.

The project was already delayed a year while the Department of Neighborhood Development strong armed the developer to save an expiring affordable housing project the city had forgotten to set aside money for.

The original proposal within the neighborhood's zoning with onsite affordable was unanimously supported. The city then f-cked it all up, delayed the project over a year, and now the affordable project in the South End they were trying to save is still in trouble because the other half of the money fell through.

This why housing is so expensive. Even when a developer tries to follow all the rules and make the neighborhoods happy the BPDA, DND, and City Hall have go meddling in things trying to move money around to pet projects or to favored people and approval gets dragged out for years. Everything is hamstrung by red tape, incompetence or corruption.

They are now allies across the alley

I think you meant "alley" not "ally".

Sadly, the Boston Redevelopment Agency (BPDA) and Fenway Community Development Corporation (FCDC) made a back room deal with the developer diverting affordable housing funds out of the Fenway.

The $6 million in affordable housing funds were given to the FCDC so they could purchase the Newcastle/Saranac Apartment complex to add to their real estate portfolio.

This deal was made against the will of neighborhood residents who spoke at public meetings to keep the affordable housing funds in the Fenway for units on Kilmarnock. Cabot, Cabot & Forbes is making some contributions to non-profit organizations, but support by the community is lacking.

Now the smoke filled room BPDA/FCDC shenanigans have backfired and putting the affordable apartments at risk. With the Zoning Board approval, Cabot, Cabot & Forbes moves ahead anyway.

For the full story, see Alison Pultinas on the front page and Eliot Wilder's Op Ed in September's Fenway News.

Under what set of logic will

Under what set of logic will this reduce traffic flow? Baseball games are roughly 6/12 months of the year. Those extra 440 apartments will bring in more traffic and take up the already limited street parking.

That neighborhood has the

That neighborhood has the highest rate of public transportation use, walking, and biking in the city. The Fenway is very dense and centrally located. Residents don't need to drive.

Residents don't have to drive?

What if Fenway residents work outside of the area in a place that's not T accessible? Also, many of the people who come to Fenway (and that can be thousands on a game or concert day) bring in their massive SUVs and take up what little parking there is. All of these developments have not factored in the infrastructure ... the Green Line is a joke and the streets are growing ever more congested. I suggest you visit the West Fenway on any given week day and see for yourself what a freakin' mess it is. Look at all the cars illegally double parked or all the Uebers idling in the middle of the street or the people who leave their rented scooters in the sidewalks.

I wonder what he thought when half of the project looks like a complete copy of his work?

Of course they approved it.

Of course they approved it.

The link to the project documents goes to BPDA project 531. I think you meant to link to project 530, which is the 60 Kilmarnock project: http://www.bostonplans.org/document-center?project=530

Transformer wends way down the Fenway
Feel the dread: Green Line's dead
James Harold, owner of the Rat, dies, 79
Thank goodness for the 39 bus
Somebody at Fenway was a real asshole today
We imagine it sounded something like: SKEEERONNNCH