Board approves condo building next to JP sprinkler factory, whose owner may sue 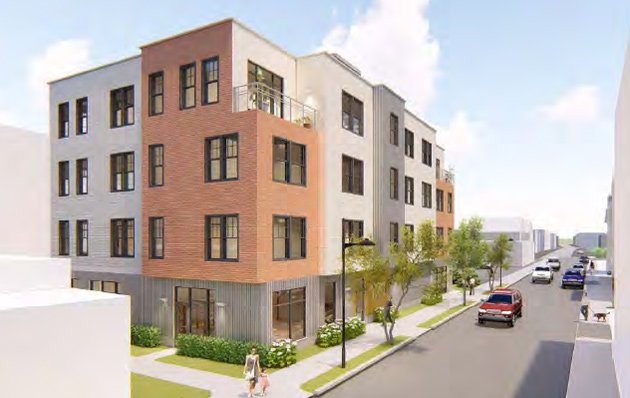 Developer Scott Johnson won approval from the Zoning Board of Appeal today to build a 23-condo building on what is now a parking lot in an industrial zone, at 121 Brookside Ave., near the Green Street T stop.

Johnson had originally proposed a nine-unit building on the site, but nearby residents asked for a larger proposal to add more housing in general and affordable units in particular, his lawyer told the board today. He added that all prospective buyers would be required to sign condo docs specifying they are moving next to a factory, in an industrial zone.

The mayor's office supported the proposal.

But an attorney for Carlysle Engineering, 132 Brookside Ave., said his client is looking at a lawsuit to block the residential building, because, he said, no condo docs will stop residents from complaining to the city about the noise, and that the city would take the residents' side and possibly force the company to move from its home for more than 50 years.

He said the company has trucks that start running as early as 5 a.m. and that they are noisy, which is fine in an industrial zone.

"This noise is clearly going to affect these residents, they are going to complain," he said. "My client's business could very well be put in jeopardy."

"No matter what [new owners] sign, they are not going to like it," he said of the noise. He added the developer had failed to show the hardships required for the variances he sought.

Those scumbags at the

Those scumbags at the sprinkler business did this last time. The guy who came to the meetings was a smirking, oily creature with a chip in on his shoulder.

People complain about the USS fucking Constitution firing its cannons. You think someone won't complain about noise from a factory across the street, regardless of how long it was there before they moved in? We do want/need to preserve non-white collar jobs in the city.

Just look at the various complaints from the new buildings around the Fleet center complaining about noise on game nights, or any where else for that matter. Not really sure what people are thinking they are getting into.

There are already people living right by this business...

...so is this guy getting complaints now?

Yeah, let’s put in another

Yeah, let’s put in another bland and sub-par wood frame fire hazard of a building so that we can drive up the prices or neighboring real estate so that business owners will be forced out of the very neighborhood that they have helped build over the years. I side with the factory, even though it might not be interesting or nice to look at.

So you would rather an empty

So you would rather an empty parking lot than something actually useful like housing that is right by a T stop. I walk by this block every day. It's not that loud and people already live on that block.

What about other non-residential uses? Stores, office space, etc - something that would not be affected by early morning noise.

Constructing new units isn't driving up property value - its the lack of housing that does that.

Wood frame low rises are only a fire hazard during the construction process. Once sealed and made fire resistant, they are no more of a concern than a steel frame with masonry facade structure. Also, you have the whole cost of housing thing backwards. Less housing causes prices to rise, more housing causes the price to come down.

Next door to a fire suppression installation company!

...and they will be next to a fire suppression company just in case!

Maybe this guy sucked in terms of personal presentation, etc... but why are they scumbags? Are there other problems here?

Even if someone is a smarmy dipshit, that should have 0.0 to do with if a development is approved. In fact, a system where personal manners are somehow related to zoning and development is a system which is garbage. You think there aren't terrible developers who are very nice in person and at meetings.

The reason for zoning laws

Is to avoid this exact situation.
Well it keeps government employees busy I guess, the Sprinkler company has a valid point and it's almost certainly going to pan out as they predict.

There are apartment buildings

There are apartment buildings all around them. They have made the same racket before. There have been residences around them for decades. I used to think they were the lil’ business that could, but now I just think they’re snowflakes.

Older residents in the area are mostly working class people and have largely lived next to it for a while. They understand where they live. the rich yuppies moving into the 19 unaffordable units in this development will think they are moving into a suburban community for whatever reason all the other yuppies moving into JP seem to think. They will be a materially and racially different group of people than the current residents. They will be whiny and self-entitled.

You have no idea what u r

You have no idea what u r talking about. But kudos on the virtue score!

Sorry, which residents are those again?

Meanwhile, thanks for the gratuitous dig at anyone younger than you; we appreciate it. Certainly the JP transplants have been the only ones whinging about progress, and not the entrenched NIMBYs who don't want anyone building more than two stories or staying awake past 10PM along a major transit corridor.

Literally what are you talking about?

If you think this area is primarily working class, aside from the folks who live in the SRO across the street, you haven’t been there in 20+ years. It’s basically a loft district at this point.

Is this the right zoning?

Given the proximity to the T stop and the Southwest Corridor Park, plus the fact that it's mostly surrounded by residential buildings, I have my doubts that industrial is still the best use for this land.

So industrial employees should have to drive to work

I mean look, if its 100s of people working shoulder to shoulder on an assembly line, then the mass transit is a strong use for employees.

But if it's 12 people working in a facility the size of a warehouse, then it isn't.

It's really about number of riders per day per unit area of the land near the T. With housing (and parking) numbers, it's pretty easy to guess what it will be. With industrial, far less clear.

Coming to the Nuisance

"A "coming to the nuisance" defense may be successful if a defendant can prove that he or she engaged in the offending activity with similar results before the plaintiff moved to the neighborhood. For example, a plaintiff is unlikely to succeed in a nuisance action for barking dogs when the plaintiff knowingly bought property next to a large dog kennel."

street view from that location

Carlysle is the blue building with the vertical battens down toward Green St. There is a sign on the building.

That was an old gear factory that became a really great artist studio/ performance space decades ago. The owners recently booted all the artists out and are going to turn it into condos, hence the paint job.

This is a great place to add

This is a great place to add more housing but only 4 units of 23 units are designated "affordable" to get a waiver? Not only is that not enough, but the "affordable" rate for 80% of income isn't actually affordable. I would absolutely be gangbusters for this if they added on 2 more affordable units & priced all the non-artist units at 30-60% AMI.

I think the abutter's worry is valid, but it seems like it can be solved if the developer is willing to include an addendum (or whatever) to the sale paperwork & the condo covenant. It seems like something that can be addressed, much like a rail right-of-way.

As a side note-- living in a city will never be quiet. Most people here have reasonable expectations. However, as more people move to Boston from sub- & ex-urban environments, we're going to have to learn how to break it to them that they cannot reap the benefits of living in a city without the drawbacks.

I'm bringing this up because I saw someone online whinge recently about student noise in JP. The student population in JP is well below half of what it was when I first moved to the neighborhood in the 1990s, and it was never as rowdy as, say, parts of Allston used to be. In short, it's negligible, unless you happen to live inconveniently close to an atypically loud neighbor.

Frankly, most of the neighborhood is noticeably quieter, which is a little sad because some of that is a loss of street life & neighborliness. Some is good-- a lot of cars are quieter than they used to be, and the bar scene is calmer (I don't think Triple D's ever closed as early or as quietly as Canary Square). It's so much quieter that family visiting who haven't been here in 20-30 years have commented on it.

However, unless JP transforms from an urban neighborhood to a suburb with no businesses, no ambulances, no schools, no parties, no street fairs, and no industry, I think it's about as quiet as it can get.

Is currently 13%, so this is actually a bit above what the city would have required.

True, but if they want a

True, but if they want a waiver, I feel like asking for more is reasonable. Providing something we need so much makes for a better argument for rezoning.

As an aside, this the parking lot where the Black Market Flea Market is held, right?

Pretty sure that’s way farther down towards Dudley.

Someone with a 30 to 60% AMI income would find it impossible to afford to purchase and maintain a condominium. People in that income category would qualify for an affordable rental unit, but not ownership.

Where will we park

Where will we park our forklifts?

require the developer to put

require the developer to put in 300% of the normal amount of noise insulating materials they use in a building. except 300% of zero is still zero, so that won't work, but SOME kind of contingent waiver based on material usage. problem solved, PLUS the residents will be happier, PLUS the building will be more efficient.

Noise from the trucks in the early morning will not be an issue. I doubt the residents will even be able to hear it over the noise starting at 5AM from low flying planes taking off from Logan runway 27 over JP...

Does Carlysle receive complaints from the people living at Bartlett Sq? Those are relatively new owned units so it should be easy enough to find out if the Carlysle concern is valid.

Further, the developer can (and should) put some $$ into soundproofing the building.

Divorced owners of JP Licks and its cow-enhanced headquarters in lawsuit spat over rent during the pandemic
Rally to stop displacement of low-income seniors in Jamaica Plain
The Midway Cafe slowly springs back to life
Try tying this up at the bike cage at Forest Hills
Three Egleston Square residents buy Ula Cafe
Youth group, developer propose two buildings on Amory Street in Jamaica Plain