Board approves Fenway building with 'compact' apartments, where auditor will conduct yearly checks to make sure no students sneak in 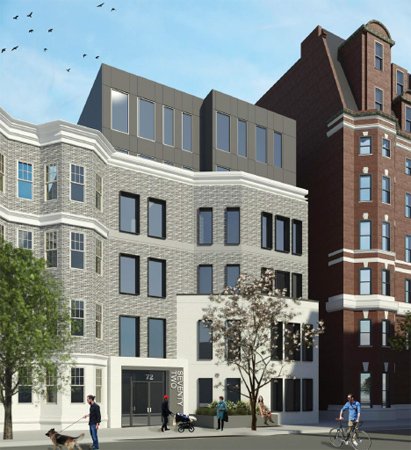 No students, but plenty of birds.

The Zoning Board of Appeal today approved a six-story apartment building at 72 Burbank St. in the Fenway, where units will be smaller than usually required by city zoning, where residents will get no parking spaces, but annual Bluebike memberships and where students will not be allowed to rent - with the building owner hiring an independent auditor to do annual "rent roll" checks to make sure they stay out.

Four of the units will be rented as affordable.

The BPDA approved the project in February, one of the first to win approval under its compact-units pilot, aimed at trying to bring down housing costs to some extent through smaller units - in this case with studios between 361 and 378 square feet instead of the 450 normally called for, along with smaller than normally allowed one- and two-bedroom units - as small as 632 square feet for one of the two-bedroom apartments.

Although the Fenway Community Development Corp., which owns a building next to the vacant lot on which the building will rise, signed off on the project, a representative of another building, at 54-56 Burbank, opposed the proposal. David Epstein said the project would prove a fire hazard by essentially narrowing access to the alley that now runs behind it, and by being too close to an adjacent, unsprinklered building. He said it would create a potential trash problem because garbage trucks that now service his building would no longer be able to use the alley.

Both the mayor's office and City Councilor Josh Zakim supported the proposal.

The board voted unanimously to approve the proposal.

Documents and renderings for the proposal.

It's crazy that they are

It's crazy that they are allowed to discriminate based on whether they are a student. Just seems like coded age discrimination.

It's even more crazy the city

It's even more crazy the city is now allowing something like 5 zoning variances for this building. This is why we're supposed to have zoning laws...but in the city's quest to build 30,000 new units apparently they don't matter anymore. This building will now be used by every city developer trying to squeeze 300sqft units to increase their profits.

~300-550sf units also known as every studio and 1 bedroom unit in the city of Boston built prior to the Second World War.

Back in the 50's when boston

Back in the 50's when boston's population peaked, relatively few adults had 500 square feet for their own private use.

Zoning laws have been used

Zoning laws have been used for all kinds of B.S. and discriminatory practices. There is no good reason why any zoning law should be sacred. They are all worth examining, especially zoning that gets in the way of solving Boston's housing shortage.

And it's refreshing to see a city and it's residents so often moving forward with developments unlike in my native CA bay area where no one wants to build anything while the homeless population grows daily.

The point of variances is to give the city more control on what gets built. They are not there to prescribe "what is appropriate for this location". Nearly 90% of what currently exists in Boston is not compliant with current zoning laws for this reason. This building is probably replacing one that was torn down in the 70s after the arson epidemic. Even though the units themselves are small, the shell of the building is very similar to everything else on the street. It fits perfectly with the character and scale of the neighborhood.

This building replaces a

This building replaces a surface parking lot which was briefly a 1 story concrete storefront/garage block between the 1920s and 1930s. Probably down in the 1930s due to property tax issues during the great depression and the old hotel next door needing a parking lot for their customers.

in Boston is not compliant with current zoning because most of the buildings pre-date the current zoning regs. An alternative is to revise the zoning rules with input from the community. Would work a lot better than inconsistent variances given to big developers.

No one else is doing anything

No one else is doing anything about our housing crisis.

Excluding makes the building more attractive to those who don't want to deal with said noise and damage. Though I suppose I've never heard of anyone being allergic to college kids before.

Yes students are typically young but they consume all the housing they can. They are definitely part of the housing crisis so I completely agree with creating housing where students can not go.

Is someone taking night classes a student if they have a full time day job? What about a part time job?

It would be interesting to see if this restriction holds up in court, assuming someone wants to live there bad enough to challenge it.

There's a reference to an agreement between the Fenway Community Development Corporation and the developer regarding student exclusion, but I can't find it. The reference is to "undergraduate students"

That said, undergrads aren't a protected category, so I don't see any legal basis to challenge it.

"Sir, put down the textbook,

"Sir, put down the textbook, and keep that term paper where I can see it."

This project is stupid

It's not going to house students, or Bostonians. The auditor will most likely become a check in person and these will go towards housing tourists.

The issue of fire safety caught my attention. Houses are required to have a minimum distance between structures. I forget the amount. Insufficient space can lead to insurance problems, including higher insurance rates.

How will the fire safety issues be handled?

They are highly flammable.

I suppose that strawmen will be banned.

Have you dealt with property insurance companies that refuse to insure your property because it's too close to the next door neighbor? I have in the context of triple deckers and single family homes.

Why do insurance companies either refuse to insure or charge higher rates when the distance between buildings is too close? Because the risk of damage, including damage by fire is higher.

If I was not aware of the issues with fire, risk and insurance I might agree that the concern about fire was a strawman argument.

Hope you never have to deal with a fire in your home. Doubt if you will be laughing if that happened.

Apparently you have never been to the Fenway neighborhood where many, many buildings have shared walls. I think we can all safely assume insurance is not a problem and is a readily available product in this neighborhood as well as in the North End, South End and Back Bay.

The same way they're handled

The same way they're handled in every other modern apartment building. With firewalls, fire doors, sprinklers, etc.

On the same note: No, they are not. As evidenced by nearly every building within most inner neighborhoods either being right up against the next one or only having a few feet between htem.

All these concessions and exclusions from regulations...

...and STILL only four of the units will be "affordable"?

It'll be interesting to see actual pricing. They'll be constrained in what they charge for the "affordable" units, but I'm guessing the market rates charged for these mini-apartments won't be much lower than their regular-sized counterparts.

Can we haz competent Mayor?

The pricing on the remaining units will be raised to pay for the cost of the subsidized "affordable" units.

If they city was serious about affordability and inclusion it would engage in wide scale multi-family zoning reform to allow a massive as of right increase in new multi-family housing construction along major bus routes, MBTA lines, and major thoroughfares.

But the city won't do that because the BRA would lose its ability to cut deals with developers for money and influence.

Boston is becoming increasingly unaffordable because the city refuses to get rid of its backwater backroom shithole mentality of under the table favor trading dealings and nepotism. The BRA wants its pound of flesh and the Mayor is more concerned with keeping the unions fat and happy rather than getting housing people want built at a rate that does something satiate ravenous demand.

Can we please get a city government not stuck in a 1930s-40s goon mentality? Or do we have to wait for Marty the Dinosaur to be replaced (or indicted!) with someone with a non-Marxist based economics degree?

Several big zoning and planning initiatives are underway with major community involvement which does slow the process. You can find a lot of information at http://www.bostonplans.org/planning/planning-initiatives
We’re so far behind the 8 ball from bad planning under Menino that it’s unfortunately going to take more than one real estate cycle to right size.

Don't be so bitter your Ma

Don't be so bitter your Ma sold the house in the 80's and Marty's kept hers.

The BRA? Who is the dinosaur

The BRA? Who is the dinosaur here? Are you the Ghost of Columbia Point?

The BRA did not actually change its name, only its dba, so all of its documents now say something like "The Boston Redevelopment Authority d/b/a/ Boston Planning and Development Agency." And people still say "BRA" no doubt partly out of habit and partly because B.P.D.A. is just a lot harder to say.

Why not abolish the BRA?

What good is it? How are we better off with it than we would be without it?

This is in the middle of Berklee College of Music

and a short walk from both Boston Conservatory and New England Conservatory. Excluding students makes no sense here. Anyone who lives here had better be quite tolerant of neighbors practicing at all hours.

How many of these will end up

How many of these will end up on Airbnb anyways

I still can't believe we've formalized into law the awful NIMBY attitude of "why can't everyone else take public transit, to make it easier for me to drive and park?"

Shots fired outside Fenway Park on Sunday
Developer files plans to replace the Fenway Star Market with an 11-story life-sciences building
Developer says it's secured financing to build 34-story apartment building across from Symphony Hall that was approved in 2017
Citizen complaint of the day: Boston Calling making windows rattle, babies cry for four miles around
Rainbow after the darkness and storminess
Get thee behind me, truck