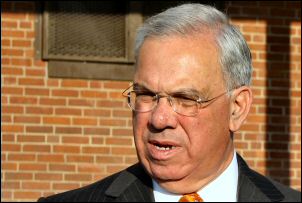 Polls may show dissatisfaction with the state of the city, but you wouldn't know it from the results - Menino beat Hennigan 2-1 - overwhelming not only the hapless city councilor but people who either voted for her or cast blanks as a protest against the nascent Imperial Mayor.

On the city council, the big news is the election of Sam Yoon to an at-large seat. First Asian-American to hold such a seat. Felix Arroyo came in second to vote machine Michael Flaherty. For me, the big surprise was Steve Murphy's re-election. After his shellacking in the sheriff's race last year, he seemed to be on his way out. Shows you what I know - and how important the union vote still is in this town. At the district level, South Boston's Jimmy Kelly easily swamped the South End's Susan Passoni, as West Roxbury's John Tobin did to Jamaica Plain's Gibran Rivera (hmm, imagine if, somehow, JP and the South End were joined in a single district).

So what's it all mean?

Chris says we might now have a city council split between more progressive at-large members and more conservative district councilors (with the possible exceptions of Yancey and Turner, although I'd argue the latter is more of a demogogue than a true progressive). Particularly interesting is the last-place finish of Ed Flynn, Ray's kid, who made "family values" (i.e. opposition to gay marriage and abortion) a centerpiece of his campaign.

But Chris adds the progressives need to be careful to work fulltime on issues they can really do something about (i.e., Boston stuff) rather than devoting their energy to resolutions in support of the Dixie Chicks.

Arroyo supporters, if you believe the papers, wanted their man to finish first to help bolster the nascent movement to make him mayor in 2009. That he finished second to Flaherty (who would also like to be mayor) doesn't rule out an Arroyo run, though. A lot can happen in four years (like, say, the incumbent decides to try for a Daleyesque fifth term) - and the dynamics of a two-person race are a lot different than those of an eight-person/four-seat council race.

More important than the horse-race aspects, though, is the question of what Boston will be like in four years. Will Menino assume he now has invulnerable super powers and so can safely ignore all questions about his actions and those of his agencies, such as the BRA and the School Committee? Even before the election he seemed to think he could. What does that mean for the city and its residents?

But enough blabbering from me. What do you think?

This is a good poast and raises a lot of interesting questions. In fact, I'm new to this blog, having just found it linked off of the Boston Phoenix's Talking Politics blog earlier today.

But I find myself focusing instead on your off-handed cdomment that Chuck Turner is "more of a demagogue than a true progressive." That's quite an accusation to make in a parenthesized aside! While I've disagreed with Chuck on various things, his dedication to progressive values is hard to question. Why do you say that someone who's been working in the communities of Boston for about 40 years (ever read Lukas' _Common Ground_? He's in there!), whose election to the Council in 1999 helped to set the tone for Arroyo's election, is a demoagogue and not a "true progressive"?

If you can make a case, make it. But a throw-away line like that is pretty weak writing.

Yes, I am turned off by Turner

Yes, Turner is a progressive (although I'm not sure I'd agree his election as a district city councilor really did all that much to get Felix Arroyo elected citywide). But he has more than a touch of demogogue about him and, no, I don't like that (then again, maybe I'm not really a progressive; I was put off by his denuniciations of Israel at the recent Selma March commemoration).

Thanks for your reply

Thanks for replying, and sorry that it's taken me a few days to get back to you.

I certainly agree with you that the incident with the pron photos was absurd and embarassing. The one possible explanation I can see is that Chuck, as a man in his 70's, may not have quite understood how easily things could be faked on the internet, but that's no excuse. It was ridiculous. I don't think that it makes him a demogogue, though--I don't see him using it to concentrate his power or persecute scapegoats.

But it doesn't mask all the good he's done, both over his career on the Council and in the decades of community work he's done in Boston beforehand. On the council, he's been at the forefront of supporting tenants' rights and rent control, ensuring that all neighborhoods have good schools before a return to neighborhood schools (for which he lost his ed. committee chairmanship), pushing CORI reform long before it became fashionable this year, increaing funding for drug rehab (on which he's worked with Councilor Flaherty), and much more. He's also used his position to help activists working against the war, for fair trade, and on a number of other issues where the presence of a City Councilor helps to make the media take grassroots efforts more sweriously. And his District 7 roundtable involves the community in ways that pretty much no other councilors do. And that's not to get into all that he did before 1999.

So while I see cause for criticism and disagreemtn, I don't see demagoguery. As for his comments at the Selma march (which I didn't hear--couldn't make it to that event), I don't think that it makes you not a progressive to disagree with him on that issue. I've done some organizing in the Jewish community (and am Jewish myself) and know how loaded that issue is. I don't think that it's bad to be critical of Israel, but there are different wasy to do so, and I don't know how Chuck did it.

Hi--I read this post with much interest, and, although I'm not a Boston Resident(I live in Somerville), I couldn't help jumping in here. Although I know little about Chuck Turner, except that he's done a lot of good, he's also made some mistakes. One mistake that Turner made was comparing Michael Flaherty Jr., to the late Louise Day Hicks. That anology, from what little I also know about Michael Flaherty Jr, could NOT be farthur from the truth, since he's reached well out beyond his home base of South Boston to liberals, blacks, and other non-whites during his campaign. Also, he's never gone out of his way to deliberately antagonize minority communities the way Louise Day Hicks did.

Secondly, even though I'm not a politically saavy person, I do keep up with what's going on through the papers, TV, etc, as well as some magazines. However, here's something else I differ with Turner on: It's one thing to criticize and condemn the Israeli Government's policies in the Occupied Territories, and Israel SHOULD be taken to task for that. However, one should bear in mind that the Palestinians, too, have contributed rather equally over the years to their own misery, and, more to the point, injecting foreign policy into a local Civil Rights March, which deals with history and horrors that occurred right here on American soil, was very out of line, and inappropriate. It's good to be critical of What israel's doing, but it has to be done tactfully, and at appropriate times.