BPDA looks to sell or lease Charlestown lot now used by EMS; any buyer would have to build a new ambulance garage 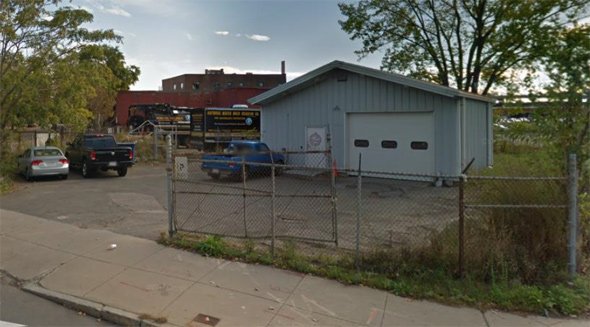 The BPDA has begun looking at selling the development rights to a Sullivan Square lot now used by Boston EMS - but with the proviso that anything built there include a new and two-bay ambulance garage that would let the city provide extra ambulance service in the growing neighborhood from a facility better designed to survive being in a flood plain.

The BPDA has long owned the 6,100-square-foot lot at 516 Main St. The state leased the land in 1992 to build a one-bay ambulance garage as part of its Big Dig mitigation. In a meeting at the Schrafft building earlier this week, it said the site would be ideal for a mixed-use building that would let the city:

Redevelop an underutilized and potentially blighted property with a project that enhances the neighborhood, provides jobs and economic development, and promotes transit-oriented growth.

Boston EMS says that with a second bay, it could add another ambulance that would provide an extra 16 hours of coverage to Charlestown, which now sees about 2,500 ambulance runs a year.

The BPDA elaborated on its goals:

A replacement of the existing EMS substation with a permanent modern facility of the same square footage, including two vehicle bays and office space and ground floor commercial and / or retail space with residential housing above.
Proponents are encouraged to incorporate any privately owned abutting property into this project and in order to do so, must demonstrate site control of the abutting property by providing either a currently dated and valid Purchase & Sales or Option Agreement. Inclusion of the EMS station is a mandatory community benefit that is required by BPDA.

Mayor Walsh last year made such public/private partnerships a priority for improving city facilities. The International Place complex downtown has both a fire station and an EMS facility built in.

ambulance station - why not do the same in the Seaport?

a couple of points - the Charlestown ambulance station is NOT the only source of ambulances in Charlestown, the data provided is very incomplete - MANY come from across the North Washington St Bridge (as well as BPD & BFD vehicles).

also - this is a great idea - sell the property & have someone foot the bill to build new facilities... why not do the same in the Seaport District? Sell property & require a BPD, EMS, BFD & so on facility on the ground floor(s) (as well as parking).

The data in the presentation

You're right, BEMS says Ambulance 15 responds to about 72% of the ambulance calls in Charlestown, but that's still a pretty high percentage.

That bridge you mention ...

Its being torn down and will be out of service for quite some time.

Not exactly. Will be major

Not exactly. Will be major congestion, though, so as a Charlestown resident I do appreciate that not all of our aid will have to come across it.

Probably because more overdoses in Sullivan Square area than there are in the Seaport ?

it is 125 High Street, not International Place, that houses the EMS and fire station.

Can they do this elsewhere in Charlestown?

And require the developer carve out space for the POST OFFICE?

It should be a State troopers and Boston Police post.

Why can't we work something out with Cambridge and Somerville? I get they aren't part of the city of Boston, but the density of this area and the frankly nonsensical city boundaries make the distinction stupid. If the metro area wasn't 400 years old, they would be part of the city with all the service efficiencies and municipal power behind them. As it is, I don't understand why the city would rather send an ambulance across a bridge than figure out how to use the network literally right next door.

Access to Cambridge isn't any better -- there's one often very congested bridge (Prison Point/Gilmore). Somerville is connected by Washington St, Broadway, and the I-93 frontage roads but that all goes through the single choke point of Sullivan Sq.

Fire Station Across The Street

Which sits on a pretty substantial lot. How is that integrated into the planning here?

Also in a flood plain

That is a big part of the issue - these are vulnerable locations. That needs to change.

The only time an Ambulance has to come across the bridge into Charlestown is when the assigned Ambulance based in Charlestown is busy responding to a call or transporting a patient to a hospital.Yes, when ALL the City's ambulances are busy they use private companies for backup which sometimes do come out of Cambridge or Somerville. Ambulance 15, stationed in this dilapidated building (with rats) does need a new building...The City needs to double it's Ambulance coverage though. Each neighborhood has 1 Ambulance assigned to the district it's assigned to, but when that Ambulance is busy the next closest available Ambulance is sent causing possibly a delay in care. MORE AMBULANCES please..

Most neighborhoods have several ambulances only Charlestown and East Boston have one up until recently. Look at comparable cities they have 2 to 3 times more ambulances too. Isolated neighborhoods need coverage not for how many calls are done in 24 hrs but what are the potential emergencies. Now with construction on the North Wash Bridge and the Casino opening soon. The time is now and not lets wait and see hiw bad things get.

Does Boston EMS make a profit?

I may have missed it but does Boston EMS make a profit? I recall in the old days the RMV prided itself on being one of the few government agencies taking in more revenue than it spent. I suspect the same for EMS since the private ambulances that contract with the suburban cities and towns seem to be thriving. Before anyone mentions the uninsured, Medicaid, Medicare and Mass Health cover many who aren't covered by private insurance.

EMS deserves adequate and comfortable quarters. I realize traditions die hard but has anyone looked into merging EMS with BFD like they did in NYC? Many BFD fire stations have a vacant bay or two, sometimes filled by a part-time special service or administrative vehicle that could be easily parked elsewhere. A merger would eliminate layers of bureaucracy while expanding the available labor pool since many firefighters are EMTs already. Lastly, you'd be amazed at the minor ailments that trigger some people to call an ambulance, ingrown toenail, dry eye, mosquito bite etc. If there's no emergency or a history of calls for trivial matters, these should be farmed out to a private contractor, keeping the city ambulances clear and available.

Police quickly noticed evidence of the Charlestown bar beating on the victim's forehead: The imprint of one of his attacker's shoes
Boston says shortage of lifeguards means it won't be opening four neighborhood pools this summer; fifth to stay closed as unsafe
National Park Service would tear down historic, but hulking and unused warehouse to create new USS Constitution Museum and visitor center
Feeding frenzy at the Charles River Dam
It's good to live in a city where you park for a client meeting and some living history goes by
Charlestown mainstay Jenny's to close at the end of the month