Citizen complaint of the day: The Custom House clock is losing time, and now, so am I 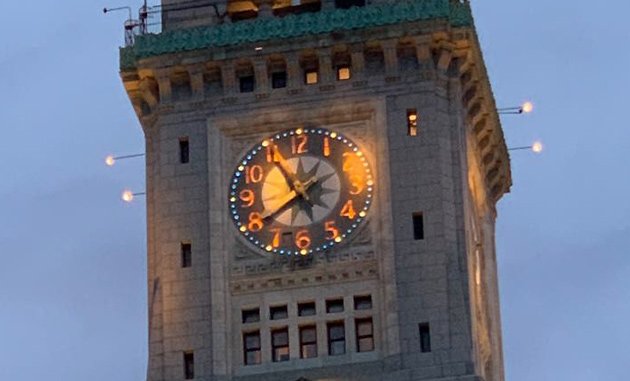 A white rabbit of a citizen filed a 311 complaint about how off the clock in the Custom House tower was tonight (along with a nice evening photo of the tower and clock):

I was late to a dinner meeting because this clock was so inaccurate. It is currently 10 past 8pm (8:10pm) and this reflecting 7:55pm. That is significant. You must change this. Many people rely on this clock for their timekeeping!

Note: 311 complaints let you see how they were filed, and in this case, the field reads:

Earlier:
Inside the Custom House clock.

Every local knows that the

Every local knows that the clocks downtown run fifteen minutes fast to fool the last call crowd. It’s a case of general survival. Also, not sure how late one can actually be to a “dinner meeting” at Sissy K’s and have it reflect negatively upon their upbringing.

This is 15 minutes behind, not ahead. All this would do is make the drunk crowds mad they got kicked out “early” at closing time.

Incompetence, not a plan

Perhaps you're too young to remember this but there was a time before everyone had a cell phone and it was pretty common to have 5-10 minute variation between various clocks. It wasn't planned, it was just cheap mechanics.

It's been a long, long time since people relied on public clocks. The idea there's some conspiracy to set the few public clocks downtown 15 minutes fast to fool drunks is pretty funny. Bars which stay open until 2am don't want people heading home early. If they did, they'd just close earlier.

There is at least 1 bar that I am aware of that definitively has a clock facing patrons set 15 minutes earlier than official closing.

The Blue Sands was a bar at 123 Summer St, at the edge of the financial district and right across from the lollipop building, which had its clocks set 15 minutes early. The Sands bar was very popular with a small group of mostly white-collar workers back in the late 60s/early 70s because it had its first pour at 8:00am (according to its clocks), or 7:45 (according to everyone else's clocks).

Though my favorite time warp/liquor sales memory was the town of Festus, Missouri (maybe 20 minutes south of St Louis) where the entire town elected to stay on Standard (i.e., non-Daylight Saving) time in the summer. Liquor stores in Missouri had to close by 1:00am local time, so by remaining on Standard time the liquor stores in Festus could stay open an hour later than in all the neighboring places.

Cambridge man on top of 300-foot steeple talked down by his daughter after 9 hours Cambridge (UPI)
https://www.google.com/search?q=%22newspaperarchive.com%2Fus%2Fmassachusetts%2Fpittsfield%2Fberkshire-eagle%2F1977%2F08-24%2F%22
[image] UPI HIGH ABOVE CAMBRIDGE, Larry McCloud stands on the scaffold-
ing of the First Baptist Church despite pleas to come down
"Cambridge man on top of 300-foot steeple
talked down by his daughter after 9 hours"
Cambridge (UPI) -- A Cambridge
man early today climbed to the needle-
point top of a 300-foot tall church steeple
and threw parts of scaffolding and the
slate roof behind him littering the ground
around the church, before being talked
down by his daughter.
"He finally came down at about 10:45
after being up there nine hours." said
William Perkins, an official of the First
Baptist Church in Central Square.
The man, identified as Larry McCloud,
38, of Cambridge, climbed to the top of
the steeple sometime about 2 a.m.
Perkins said a close friend and
McCloud's daughter, Laurie, managed to
convince hime to end his vigil. The man's
estranged wife, Kathy, as well as a min-
ister and psychologist were also at the
scene in an attempt to coax him down.
"He started coming down on the out-
sie of the steeple. But a lot of the parts
of the scaffolding were gone. He was fi-
nally convinced to crawl inside the
steeple through a window and he was
brought down to the ground," a police
spokesman said.
Police said McCloud was tired after
his vigil, bugt that he was used to heights,
being employed as a flagpole painter and
high-rise construction worker.
Earlier, police said that as the man
climbed he threw parts of the scaffolding
to the ground behind him. "I just don't
know how we'll get him down. There's
not much of the scaffolding left. I don't
think an aerial ladder can reach that
high," a police spokesman said.
"He's up at least five stories and re-
fuses to come down." said the police
spokesman.
"It's a hairy situation up there. The
ground around the church is just littered
with pieces of wood and metal pipe from
the scaffolding and slate from the roof."
the police spokesman said.
"One of the dangers is, is that when he
tosses that stuff down it gets carried by
the wind and there's no telling where it's
going to go, so we had to rope off the
area." the police spokesman said.
His stint drew several hundred onlook-
ers and caused traffic to be blocked up
for miles as police roped off the streets
for about one block around the church.
Police said McCloud lives near the
church.
McCloud was wearing a bright red
sweater and dark pants. He was not dis-
covered until daybreak when police
spotted him throwing parts of a scaffold-
ing to the ground.
"He's just up there with his hands in
his pockets right now." said a female
parishioner who answered the telephone
at the church. "I'm here because I've
got keys to the steeple in case police
want to go up and talk to him through
the small window up there." she said.
The church was recently designated an
historic landmark and was undergoing
an extensive facelifting.
--The Berkshire Eagle
Vol. 86 -- No. 90
Pittsfield, Massachusetts, Wednesday, August 24, 1977
Page 1

Grew up literally just beyond shadow of bell tower in Waterfront side of North End, and seem to remember that it chimed on the hour like Big Ben. Does anyone else recall this feature? Would have been before it became a luxury timeshare. You can go up in the bell tower at certain times of the day, and other areas are in theory public, as agreed in original privatization deal in '90's.

No clock on your phone??

How about looking at that device you used to take the pic?

Seems like a great opportunity to set it 10 minutes fast, suddenly causing everyone in Boston to be early or on time.

Under what theory of anything...

Leverett Connector CarBQ
He saw something, he said something and the T did nothing, at least at first
Anotha scorcha
Nature is healing: Turkey strolls through downtown Boston
Day ends in a blaze of gold
Water, water everywhere comes in handy when boat bursts into flames