Citizen complaint of the day: Forced to reassemble an old desk to have it taken away

In a series of 311 complaints, a Jamaica Pond resident tells the story of the old desk he or she no longer wanted but which required far more work than expected to have city trash collectors take it away.

The Pondview Avenue resident disassembled the desk, took it outside on Tuesday - and then was put out to come home and find the thing still on the curb and so filed the first of several reports: 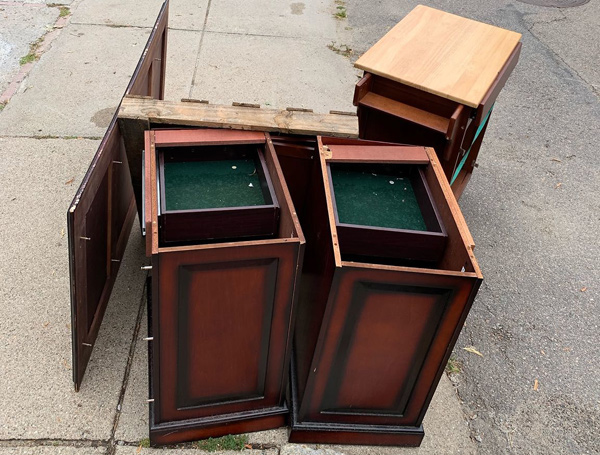 The desk wasn't picked up. The resident filed another complaint. On Wednesday, the resident found the desk still there, but this time with an orange note from Public Works attached: 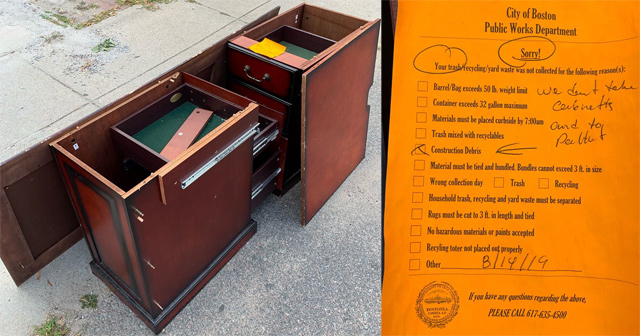 Once again, someone from the City decided this trash is "construction material". It is not. What it is is a desk that was taken apart to get it down the stairs and outside for disposal. The City's web site clearly states that a desk can be put out with regular trash. Please come back and take this away. Thank you.

To drive the point home, the resident filed another complaint with a photo from the other side: 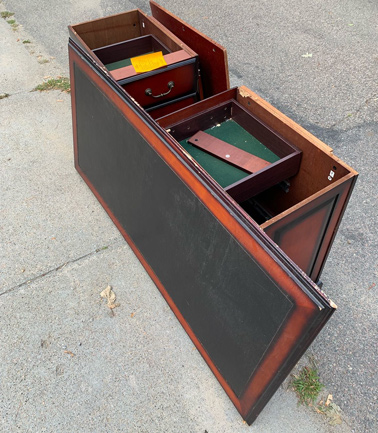 Rather than risk getting another rejection slip, though, the resident then reassembled the desk Wednesday afternoon - and removed the pallet on which the replacement desk had been shipped, since it seems the city won't pick up pallets, along with the remnants of an old rolling kitchen cart: 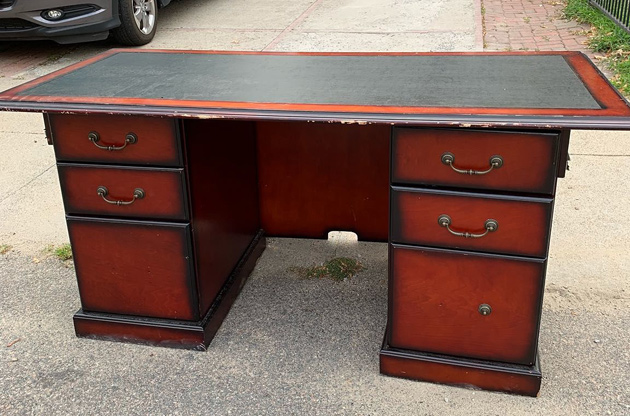 The desk has been reassembled. The 2 doors to the rolling kitchen cart that you did take away have been removed from the remaining trash so as not to create confusion. It's just the desk now. Please come and take the desk away. Thank you.

At 10:46 a.m. yesterday, the city replied it was satisfied that was no construction debris and notified Public Works to send out a crew to haul the reassembled desk away.

... whether this is peak Boston or just peak bureaucracy. Either way, kudos to the desk owner for actually putting the thing back together. I think I'd have just kept complaining & explaining until they came back & took it away piecemeal or, if that failed, probably would have caved and disposed of it another way (whilst grumbling loudly).

I think only if you mean 'bureaucracy' in a positive way

It strikes me that this is an example of 21st century bureaucratic tools resolving a citizen's QoL issue far more easily than would otherwise be possible. If there was no 311 system and if the city's trash policies were not available on its website, I very much doubt that this person would ever have gotten the desk taken away. At least without a bribe to the sanitation crew.

I'm plenty cynical about the way this city is run, but I have to give credit to the 311 system. Although it's far from perfect, I really feel it's made a marked improvement in the city's responsiveness to everyday municipal issues.

They do this in the burbs too

up in wakefield you gotta buy trash bags with the town logo on it for ANY overflow trash that doesn't fit in ONE blue trashcan except it can only be CERTAIN types of trash, NOT any construction materials (wood scraps, paint can) and anything larger must be tagged with the proper sticker denoting what type of trash it is (couch, TV, etc) to be able to be picked up and oh yeah, recycling only comes every other week.

how in gods name does that even work?!?!

I've navigated healthcare plans easier than trying to figure that out.

calling the number on the orange slip would have been faster and probably wouldn't have needed the desk rebuilt (for lack of a better term, I'm sure they didn't screw it together but just sat the top across the two drawer pedestals). But this route did lead to more drama watching for us. 2.5 stars!

Does someone on the other end answer the phone?

One of the advantages of 311 is it appears you have less dependency on there being someone to answer a specific phone.

I've spoken with them numerous times. And they have voicemail. You leave a phone number and they call you back. Imagine that?

ETA: 311 goes to a help service located I don't know where - City Hall? It requires you to believe they will forward it to the appropriate department. And then you wait to see if they respond to that forwarded ticket. That's a lot of waiting around. You can easily pick up the phone and call. Just like the olden days.

Thats the funniest part about all this

Boston Public Works likes to get cute about things like this, but in winter if you need a fridge removed simply leave it in the street after a snowstorm as a "space saver"...TOXIC WASTE REMOVED FOR FREE!
Once a year (Aug31st-Sept. 1st) THE ENTIRE city is a trash can. Just toss whatever you want to get rid of out into the sidewalks. No phone calls. No stickers, no appointments, no tickets, Just toss it into the streets!
Anytime outside of move-out/in Xmas and snowstorms however and they break your balls like this. Unreal.

Bro, do you even Boston?

Because if you did, you'd know it's toilets the city won't take and which Southie wiseasses famously threatened to put out by the curb in the pre- and early Menino days before our 48-hour space-saver rule was formalized.

In fact, the city will pick up refrigerators (and even TVs); you just have to arrange a pickup through 311.

Who is John Galt?

Don't want to calculate the time and money to get this desk picked up for solid waste disposal.

A budget poor non-profit could have put this desk to use (with tax deduction) and probably pick it up, too.

Should've given it away

Selling or giving away your stuff is easier then bundling it up and putting it out per the rules of Boston Public Works. I am not complaining about the rules or BPW (though I get this guys complaint - and it was funny to read about since I wasn't involved). BPW takes an amazing amount of stuff and the rules aren't difficult. But they won't come up the stairs and into my house to take my crap away!

I'm looking at this thing thinking it's wicked nice desk. Posting a pic on craigs list of FB and someone would have come and picked the blasted thing up and made better use of it.

Life on the pond side is so burdensome.

At least they don't call 911 when the hoi poloi walks through.

Jamaica Plain landlord drops suit against Pine Street Inn apartment proposal
Window hit by gunfire at South Street development in Jamaica Plain
Election roundup: Council candidate pulls out of progressive forum; mayoral hopefuls gird for series of forums
Man charged with trying to kidnap young girl in Jamaica Plain after first picking her up and kissing her on the head
Resident rescued by ladder from fire on Boylston Street in Jamaica Plain; turtles also saved
In bloom at Jamaica Pond