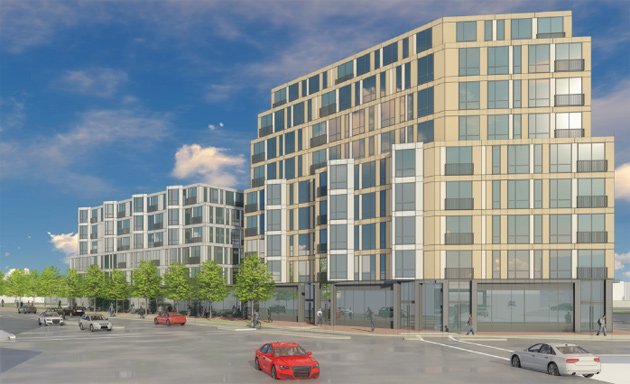 Developers last week filed plans for three mixed-use buildings on Dudley Square land awarded them earlier this year by the city as part of a program to turn city-owned parking and vacant lots into affordable housing, stores and offices.

At 105 units, the largest is Roxbury-based Cruz Development Corp.'s proposed two-building complex on what is now a parking lot 135 Dudley St., between the B-2 police station and the BPL branch and Dudley Literacy Center. At 40-50 Warren St., a couple blocks away from the Bolling Building, New Urban Collaborative is proposing a 25-unit apartment building on what is now another parking lot. Also now before the BPDA: A proposal from the Madison Park Development Corp. for 20 condos at 75 Dudley St.

Earlier this year, the Boston Department of Neighborhood Development awarded development rights to the parcels as part of its Plan: Dudley Square initiative.

A fourth proposal is also expected, from New Atlantic Development and DREAM Development for a building with 62 apartments and 14 condos at 2147 Washington St., between Williams and Ruggles streets

The Cruz proposal calls for a six-story building with 55 affordable apartments, a nine-story building with 50 affordable condos and 55 market-rate condos, space for a new headquarters for the Boston NAACP and a restaurant/art space, a plaza ad park and a garage with room for 270 cars - which will serve the Cruz buildings, the library and Roxbury Municipal Court.

The siting of the project creates a welcoming gesture for circulation coming from Malcolm X Boulevard and Gourdin Park and provides an activated edge along Dudley Street and a portion of Washington Street to the Boston Police substation. Approximately 270 spaces of above grade, structured parking is accessed via the existing Warren Street curb cut, well away from Dudley Street. This parking is intended to serve residents, visitors, as well as a component of public neighborhood parking, and will be architecturally and programmatically screened from direct view from Dudley and Washington Streets. Above the retail level, the site is split into two buildings, creating an elevated courtyard between the buildings. Each building has its own architectural character, further integrating it into the diverse architectural context of Dudley Square.

The project provides a community park between the eastern boundary of the site and the Dudley Branch of the Boston Public Library. This shared green space is intended for tenants as well as neighborhood and Library uses.

The building in the context of the square: 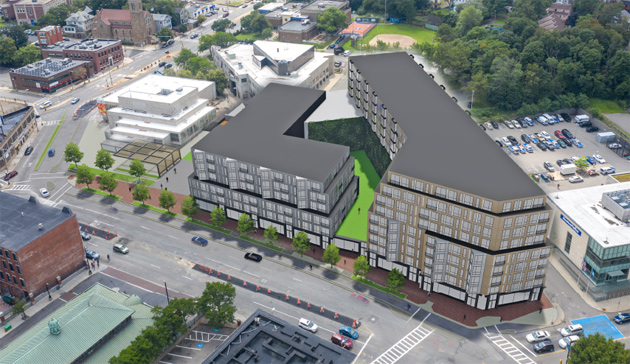 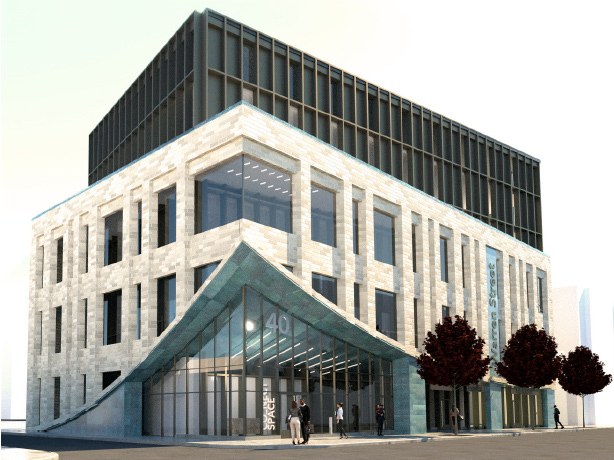 The building, kitty corner from the Dudley Square bus station, would have no parking, but would have first-floor co-working space. 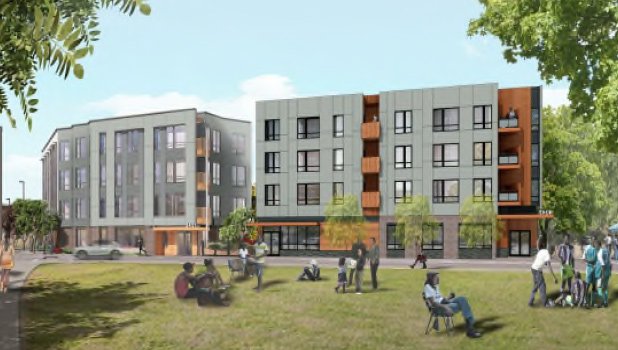 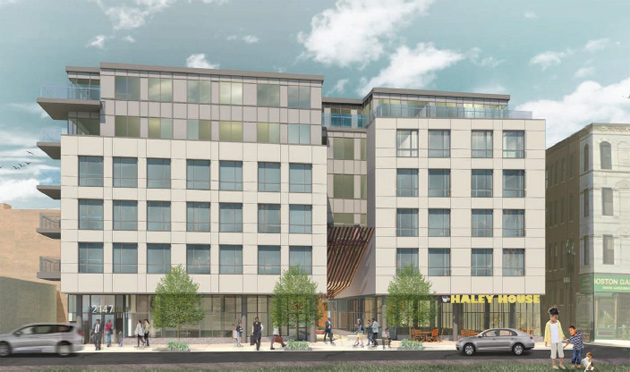 ...facing the public park and surrounding two sides of a courtyard that's practically shaded all year. Re: 135 Dudley St.

People are going to be like “ what the hell were these architects thinking?” And history will tell “that’s the year they legalized marijuana.”

If you can call it architecture. It looks like every other piece o'crap development going up around the city.

Bravo -- not necessarily for the design

Bravo! -- for proposing 200 units of new housing for "folks" without being something immense and bureaucratic requiring immense thorough bureaucratic and time-wasting revie before a shovel or a hammer is lifted in earnest

The key take-away is No this is not the result of channeling McKim nor Richardson nor Bulfinch, nor Asher Benjamin, nor Alexander Parris and certainly not Gridley JF Bryant

No-one should expect that each building subject to the Small-Project Review [which should be just filling out an on-line form to be reviewed in a 2 week period] is going to be designed by a star architect. What should be expected indeed is that the building is a "good neighbor" with its surroundings and is functional, utilitarian and "affordable".

Note also that this "affordable" -- has nothing to do with some bureaucratic formula based on some sort of survey of surrounding income at the time the structure was constructed -- NO -- affordable means being affordable for the community -- as in we can do more of these without extraordinary effort or circumstances.

So Bravo to the developers! -- and Keep it coming -- about one of these size projects [25 units housing about 50 to 100 people] per week if you please -- and keep it coming!