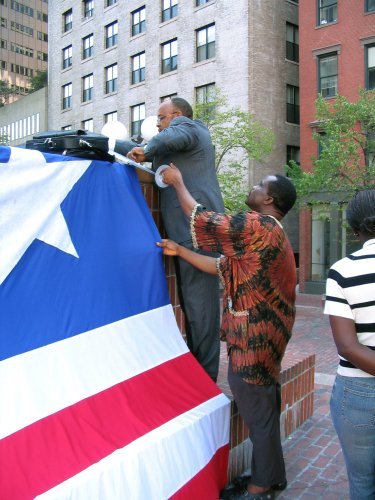 Boston, Massachusetts-Amid divisive impeachment battle in Congress, Democrats and Republicans united in voting for the National Defense Authorization Act of 2020 (S.1790) which also includes the Liberian Refugee Immigration Fairness Act. On Friday December 20, 2019, President Donald J. Trump signed the legislation into law, making thousands of Liberian Refugees living in limbo in America for decades eligible to apply for permanent residency or green cards. The law which comes into force immediately is a perfect Christmas gift for both the United States and Liberian Refugees. For Liberian Refugees, thirty (30) years of suffering, uncertainty and relentless advocacy have ended. For America, the rare display of unity in the convergence of Democrats and Republicans to tackle the thorny issue of injustice and racism against people of color in US immigration System is the beginning of a new chapter in national unity that might save America from another civil war or self destruction. Alas, “United we stand, divided we fall.” Amongst Liberians, praise for the law was swift. "It's a miracle! And miracles are always possible to those who believe!" Said Pastor Torli Krua, a Boston-based advocate for refugees.

The Liberians, many of whom have been denied access to humanitarian assistance and work permits for the past 17 years owe a debt of gratitude to President Trump. However, the mastermind behind the Liberian Refugee Immigration Fairness Act is Senator Jack Reed-D-RI who has spent decades fighting tirelessly for fairness and the Liberian cause. The Rhode Island Liberian Community and Senator Reed, a Democrat from the small state of Rhode Island are the unlikely champions who pushed the " Liberian Fairness Act" for decades, albeit, unsuccessfully under Presidents Clinton, Bush and Obama.

And given his anti-immigrant rhetoric, few expected President Trump to sign the "Liberian Refugee Immigration Fairness Act," where Obama's two terms failed. " Unity is the soul and strength of America. We call on Americans to continue uniting in the cause of justice because ‘righteousness exalts a nation!’ We invite President Trump, Senator Reed to a party and celebration both in Monrovia and Boston, where the Liberian Civil War originated." Said Rev. Krua, founder of Universal Human Rights International, a refugee-led advocacy.

It can be recalled that on December 24, 1989, a group of armed men led by residents of Boston, Massachusetts invaded Liberia and plunged the country into decades of violence that claimed a quarter million lives. Many neighboring African countries opened their doors to hundreds of thousands of Liberian refugees. However, the United States, that founded the Colony of Liberia denied 10,000 Liberian Refugees equal protection for decades, for no justifiable reasons.

In contrast to the plight of Liberian Refugees denied protected status (TPS/DED), the 102nd. (1991-1992) Congress passed a law which allowed 52,968 Chinese nationals to be granted DED after the Tiananmen Square incident to adjust to permanent residency status. The 105th. Congress, (1997-1998), passed legislation known as NACARA. Under this law, 150,000 Nicaraguans, 5,000 Cubans, 200,000 El Salvadorans and 50,000 Guatemalans are able to adjust to permanent residency status.

Many Liberians are in fact descendants of American Settlers who deserve automatic American Citizenship, had it not been for racial discrimination in American Immigration System. And the history of discrimination against Liberians and their African Ancestors predates the Constitution of the United States. African Slaves’ ties to America dates back to 1621, long before the founding of the United States. After the American Revolution and the adoption of the Constitution in 1776, high ranking American Government officials including George Washington participated in slavery and the dehumanization of Africans, free Blacks and mixed race Americans.

As the growing numbers of free blacks and mixed race Americans threatened the institution of slavery in the early 1800's, high ranking American government officials who were also slaveholders and white supremacists plotted to colonize all free Blacks and mixed race Americans based on the belief that multi-racial America threatens the institution of slavery and private property (Slaves). Liberia was founded by white supremacists and slaveholders decades before slaves were freed in 1822, and not founded by freed American Slaves because slaves were freed by the Emancipation Proclamation on January 1, 1863. All the leaders of the American Colonization Society were white slaveholders, not ‘free men of color’.

The white supremacists organized the American Colonization Society (ACS) with the purpose of removing and colonizing all free people of color in a remote colony in Africa while welcoming Europeans to the 'land of opportunities' built by African Slaves.

In its 2nd annual report, the ACS was blunt in its determination to remove all persons of color: “If, as is most confidently believed, the colonization of the free people of colour, will render the slave who remains in America more obedient, more faithful, more honest, and, consequently, more useful to his master, is it proper to regard this happy consequence to both, as the sole object which the Society hope to attain..."

The slaveholding Founding Fathers of the American Colonization Society hoped colonization of people of color would help prevent slave revolts and Christianize Africa, and the US Congress paid the ACS $100,000. Attorney General William Wirt, in his opinion #229 found that it was illegal to use taxpayers money to colonize a portion of the national population. The slaveholders who disagreed, include, President James Monroe (Owned 75 slaves) Associate Justice Bushrod Washington and 1st President of the ACS (owned 100 slaves) and Hon. Henry Clay Speaker of the House and Secretary of State who served as the 2nd President of ACS (Owned 50 slaves).

Fast forward two hundred years to the invasion of Liberia by United States Citizens and United States Persons with permanent residency from Boston, Massachusetts in 1989 that claimed a quarter million lives. Now consider the roll call of all those who would not allow the descendants of mixed race and Black Americans illegally colonized by the American Colonization Society; President George H. W. Bush, President Bill Clinton, President George W. Bush and Democrat and African American President Barack Obama.

Officially sanctioned racial discrimination against Native Americans, African Americans and descendants of colonized because of race remains the greatest threat to America, Space Force, notwithstanding. Not only were Liberian refugees discriminated against, African American minors airlifted along with their Liberian Mothers by US Marines during Operation Shining Express in 2003 were also recklessly abandoned for decades by the US Government. In the interest of American unity, we call for the followings:
An investigation into the abandonment of African American minors from Liberia.
Automatic citizenship for all Liberians of American descent colonized unlawfully
Payment of damages for the excesses of colonization including massacre, rape, torture, theft of land against indigenous African Tribes
Admission of Liberia into the American Visa Waiver Program because no country in the world has earned equity in sweat, blood and tears invested in building the United States of America than Liberia.
Admission of Liberia in temporary work visa program

Allston residents not fans of making Western Avenue corridor even denser
Harvard looks to move the American Repertory Theatre across the river
Citizen complaint of the day: Imagine the Purge on Newbury Street, what, you can't, because the city would never allow it there? Welcome to Allston
Fire erupts in restaurant block on Brighton Avenue in Allston
Boston to challenge 2020 Census numbers
BU president to retire