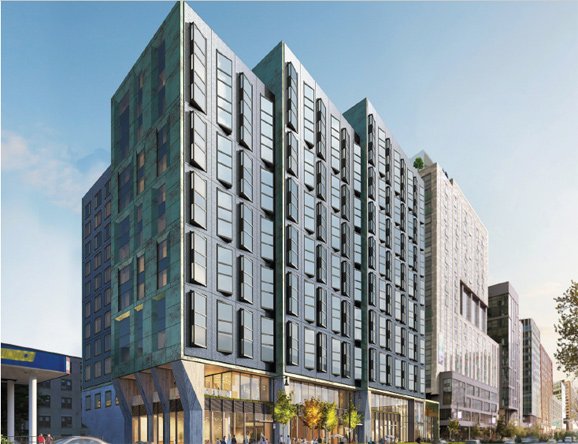 Scape's plans also call for a 10,000-square-foot, 156-seat "Boylston Black Box" theater focusing on LGBTQ productions in the Boylston Street building, in homage to the LGBTQ clubs its construction will eliminate.

In a filing this week with the BPDA, Scape, which until now has focused primarily on private dorm towers in the UK, Ireland and Australia, and which had hoped to make Boylston Street its first US building, said it changed focus after several months of meetings with Fenway residents and city officials, who noted the worsening imbalance between housing and jobs in the Fenway, which is expected to add 10,000 more jobs over the next three years.

Scape says if it wins approval for its three-building proposal, it would exceed the city's requirements for affordable housing, through the 220-unit building at 2 Charlesgate West, in which all the apartments would be rented as "affordable" - to people making between 80% and 120% of the Boston area median income. That would mean 20% of the total units in the three-building proposal would be affordable - city regulations call for 18% - in a building far shorter than the luxury tower once proposed by the lot's long time owner.

In addition, the company says that 50 of the units in its proposed 445-unit Audubon Circle building would be set aside as extended-stay apartments for families of patients at Children's Hospital. The building would also have 215 parking spaces in an underground garage.

In its filing, Scape emphasized that despite its dorm background, it is not trying to sneak students into the Fenway via its Boylston building and really is trying to meet the neighborhood's growing housing demand, especially for middle-income residents:

The housing units at Boylston Place have been designed to residential standards and specifications. Minimum lease terms will be one year, and any type of short-term rental or overnight accommodations (e.g. Airbnb, Sonders, etc.) will be expressly prohibited and enforced.

Moreover, the product and programming designed by the Proponent – locally and nationally – is certainly not a ‘co-living’ concept; co-living providers typically are driven by high-velocity short-term leases for folks seeking to ‘rent-a-bed in a 10-bedroom unit’. In contrast, the programs developed by the Proponent are diligently comprised of a mix of studio, one-bedroom, two-bedroom and three-bedroom residential housing units which prioritize privacy, affordability and proximity to the urban core.

The residential units will be fully-furnished which will further enhance the affordability and attainability for all residents of the Fenway neighborhood.

The proposed 15-story Boylston block would rise on land now occupied by two-story commercial buildings between the gas station and the new Viridian building, including Machine, the Baseball Tavern and a Domino's.

Scape is proposing just 15 parking spaces, for use by the Boylston Black Theater, which is now proposed for a total of 10,000 square feet of space, up from the 6,000 the company originally proposed.

The view from Boylston Street towards the Back Bay: 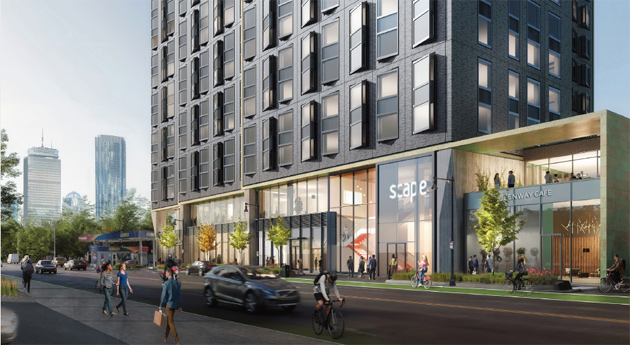 The Audubon Circle building would sit on land on which Children's Hospital won approval in 2013 for an office building with 432 above-ground parking spaces, at 819 Beacon St. 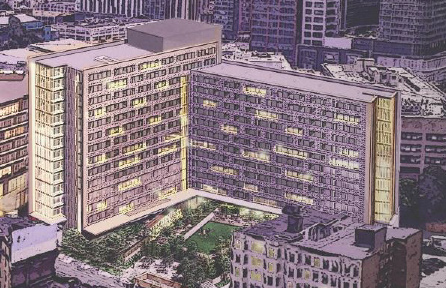 At Charlesgate, Scape says it will try to draw in "faculty, staff, artists-in-residence, researchers, graduates, undergraduates, etc." for at least some of the Charlesgate units. 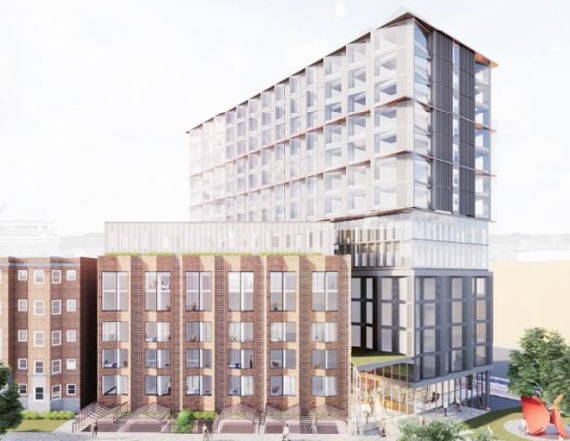 I feel like this is the first developer (ever?) to listen to the neighborhood and drastically change their plans based on feedback. I am EXTREMELY impressed with them and think they deserve quick approval for taking the feedback seriously.

Not only did they completely change the dorm building on Boylston Street to apartments, they also changed 2 Charlesgate from the eyesore skyscraper previously proposed into a really nice looking building that fits the decor of the block.

Note that its not an impressively tall tower, nor sitting in the midst of Beacon Hill [the oldest surrounding structures are about 100 years old]. The site is not in the midst of a former heavy industry site needing much mitigation -- all of the previous uses were residential or commercial

So why does it take 349 pages to tell the BPDA --Hey instead of that large-ish private dorm -- after talking with the neighbors -- We've decided to build three apartment buildings about the same height as many of the new structures if not shorter?? This is pretty much what the "Proponent" does in the first 12 or so pages.

Part of the answer is the list of consultants and advisers involved with the project:
Development Team
[The following lists the key members of the development team for the Project:]

Yes, the Article 80 process and the necessity to hire a PR firm + approvals consultant to help you with it while paying the design team to produce work for the PNF does raise the cost.

Beyond that though the list of consultants is pretty standard for any major project no matter where you are. You will always have geotech/civil/mech/elec/plumbing/fire protection/traffic/acoustic engineers, a code consultant, surveyors, and usually a landscape architect. Sometimes you do the sustainability in house, but not often. You always run the building through a wind study, hence the wind engineer.

You think cost of living is

You think cost of living is high here because some high-end developers hire a bunch of outside people short-term to improve the odds of their multi-million-dollar project getting approved?

Nice complaining, solid B+ effort, but no. It's generally expensive here because there's a ton of money floating around in the local economy; businesses charge as much as people can pay. Any concentration of capital anywhere on Earth will show the same phenomenon. Housing specifically is extra expensive because the whole area has been built out for decades, so new construction means demolishing something else (expensive) or building on a bad lot (expensive).

You think cost of living is high here because some high-end developers hire a bunch of outside people short-term to improve the odds of their multi-million-dollar project getting approved? .....It's generally expensive here because there's a ton of money floating around in the local economy; businesses charge as much as people can pay.

Tons or tins of money circulating around in a prosperous economy certainly influences the sales price of a property -- mostly in the way that it influences the purchase price of the land or existing structure to be (re)developed The same size and type of structure sitting on the same size lot or same sized raw land -- obviously is of different values depending on the surrounding properties and development. For example a small house on a small lot located along Lexington Road in Concord could easily cost $2M -- the same sized house in Indianapolis*1 or Laurel Mississippi*2 could cost $20K. That initial acquisition cost could range over a factor of 100X.

In addition the work to upgrade the utilities, roof, fixtures, kitchen appliances, and cabinets, etc., in Indianapolis on the older house might cost $200k in Laurel Mississippi it might be $150k. -- the House might then make a good profit for the developer if it were to sell for $300k. Concord's cache and such might lead to the same kinds of work costing $400k to 500k and it requiring a sales price of $2.5M to $2.7M to turn a profit for the developer. No argument there -- location, location, location -- it does have reality.

My point was that in our neck of the woods -- the externalizes of the regulatory environment has raised the cost of development significantly. Each of the consultants in the list has a specific expertise and associated costs. Many of the consultants are necessary such as architects, structural and geotechnical engineers -- especially for a significant structure -- No argument. Although one might argue that if the City was to approve a generic type of structure such as a modern version of a 3-Decker even most of that could be done through a web-form.

My argument is that the various Title this and MP that requirements driving the hiring of consultants to model expected effects on: daylight, shadows, wind, noise due to mechanical equipment, cultural background, etc. for many projects could be replaced by some links to websites provided by generic solution providers, etc.. Indeed -- much of this heavy investment in consultants could be replaced by just a web form that the developer fills out and unless there is a major deviation -- automatic approval of these regulatory requirements.

Then the process of development [of reasonable scale projects] could be reduced to:

For Instance -- if the developers of the former Suffolk Downs [161 acres in Boston and Revere]*3 were to sell say 3 acres to another developer who would build a couple of streets of "New 3-Deckers" [4 floors of stacked manufactured units] on typical Southie sized lots [40 ft of frontage and 60 feet deep] -- say a total of 32 structures and two parallel streets -- 128 units housing say 300 people -- the whole thing could be done on a couple of webforms -- no consultants need apply.

The same might even be true with some sort of semi-generic 6 to 8 story structures built Back Bay style [shoulder to shoulder] including ground floor retail and perhaps 2nd floor professional offices with housing for 800 to 1000 on the same amount of land. Though in this denser case, there might need to be some consulting on the structures and foundations, etc. However in either of these cases -- the time from plan to open-house could be compressed to a year or less and the external consultants minimized.

Refs:
*1 see for examples --- from the development team in Indianapolis that calls itself Two Chicks with a Hammer in the TV series "Good Bones"
*2 see for example the husband and wife development team of Ben and Erin Napier in Laurel Mississippi in the TV series "Home Town"
*3 who have already gone through extensive consultant work when they were ready to pitch the former Track as Amazon II

They ain't building a two-family

1,300 units exceeds the number of houses in some of Massachusetts smaller towns. So yeah, they need to do some work to show it's going to be mechanically sound.

Not a bad looking building

maybe our architects should think about going to school in Great Britain.

Gensler designed the building and their office is in Boston.

That seems much more oriented to students wanting to live off-campus rather than local residents seeking more affordable housing.

I feel like students are usually OK with furnishing their apartment with curb finds and Goodwill, while families are the ones who must have a "bedroom set" and a "living room set."