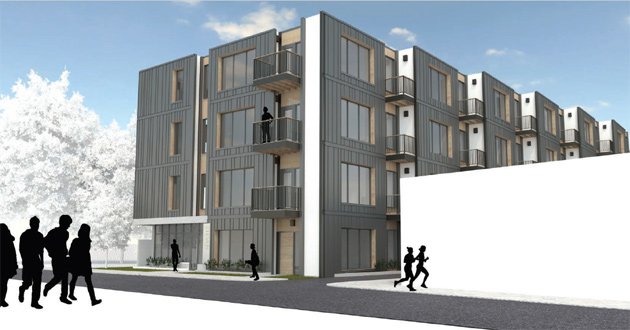 Architect's rendering. The blank wall is an existing health center, not a proposed drive-in screen.

The Zoning Board of Appeal yesterday approved a developer's plan to replace a house-like apartment building on Taft Hill Terrace in Roslindale with a four-story, 16-unit condo building - across the municipal parking lot from a recently completed 19-unit condo development.

Board Chairwoman Christine Araujo voted for the variances needed for the proposal, but used it to issue a request to other potential Roslindale developers: Don't propose things that so out of character with the rest of the neighborhood.

Araujo, herself a Roslindale resident, said she was particularly concerned by a rendering showing the building from Basile Street on the other side of Adams Park: "It looks like it could very well be South Boston or Dorchester or anywhere in the universe," rather than something that fits in with Roslindale's existing aesthetic, she said. "It just looks out of context."

The proposed view from Basile Street: 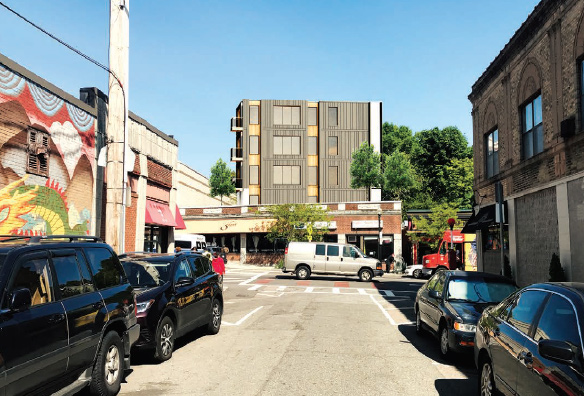 Developer Eoin Barry's $4.5-million building, next to the Greater Roslindale Medical and Dental Center, would have 11 two-bedroom units, 3 one-bedroom units and 2 three-bedroom units. Two of the condos would be sold as affordable; three units would have private roof decks. Barry would provide spaces for 14 cars - and 16 bicycles.

The offices of the mayor and City Councilor Tim McCarthy supported the proposal, as did Adam Rogoff of WalkUp Roslindale, who said the group is in favor of proposals, such as this one, which increase the population and walkability of Roslindale Square.

Nobody spoke against the proposal.

The BPDA board approved the project in September.

"It looks like it could very well be South Boston or Dorchester or anywhere in the universe," rather than something that fits in with Roslindale's existing aesthetic, she said. "It just looks out of context."

So first we had to worry about buildings being out of character for Boston but now it has to be our boring little subset of Boston.

"Dear developers, please choose between Wallpaper City, the bottle and can redemption building and the charmless SSA building when making proposals here so you don't ruin our historic neighborhood.'

I, for one, think there’s a missed opportunity here for putting up another building practically inches away from another so that the windows of the new one present stunning views blocked by rooftops and chimneys (I’m thinking especially of the lovely addition on top of the former Redd’s/Tony’s that has a window that clearly opens to the chimney on top of Romano’s). That’s neighborhood character.

That's a failure by the architect, not the ZBA

There seem to be very few architects and developers in the Parkway who do interesting, good work but that's hard to mandate. Anecdotally, seems like there's more interesting stuff in other parts of town, Somerville, etc...

Honestly, if someone wants to start shaming these people on social media, I'm fine with that. Have any professional pride people.

You were correct when you said architect AND developer. I assume that the architects delivered what they were asked, ie what the developer was willing to pay for: "Give me something that I can sell--you know, like the other ones that are being sold. And don't spend too much money designing it, you'll cut into my profit. Just make it conform to zoning and other codes and we'll get to our next project."

the SSA building is utterly

the SSA building is utterly and completely unremarkable but at least it's not actively an eyesore. These prefab panel garbo buildings look like shit and are built to last just as long as it takes the developer to sell to the next guy. Would much rather have a boring charmless brick building that blends in.

Where does one sign up for a degree in banal architecture design? Architecture is supposed to be an art form and it is reduced in Boston to an cheap adult Legos aesthetic.

Get used to it, Araujo

There’s a lot of quasi-industrial land begging for development between Forest Hills and Rozzie Square. The view from the commuter rail is going to change drastically in the next decade.

How dare you! This

How dare you! This neighborhood isn't a developers playground. It is our neighborhood which is beloved by all. Its time to stop these capitalist building in places that make no sense. Don't underestimate the people of this city.

For giving me a laugh. My favorite posts are those where I can’t tell whether they’re serious or ironic.

In the slim case it’s the former, the corridor down Washington through JP and Roslindale, clustering around public transportation, is a place where it makes a lot of sense to add housing.

At this point, the pressure for more housing in Boston is so great that entire neighborhoods are being invented. Anywhere rundown and low-rise within the city limits will have its turn.

I hope they will be driving pilings. I question the stability of that land behind Shanti's and extending northerly to the hill we see off the Dunkin parking lot.

The hill at Dunkin has been shored-up at least 2X in my lifetime and the last set of revetment efforts have shifted substantially from rain erosion. I'd expect the weight of that building to eventually shift over time.

Any close observer of the ZBA

Any close observer of the ZBA knows that Chairwoman Araujo says this about every single project in Roslindale, whether it be a dormer or a multi-story building. It's her standard quasi-NIMBY take. As long as she ultimately doesn't stop the needed growth, she can have her pithy comments if she wants. For all I know, she just says it so she has an excuse for her NIMBY neighbors who don't want anything built.

Board members bring up what they know best

I mean, a few weeks ago, during a discussion about urinating, screaming patrons at closing time outside a South Boston bar that wants to expand, a member from West Roxbury brought up the Corrib in West Roxbury.

Man gets 30 years for planning murder plot that got his uncle shot to death in a Roslindale parking lot
Roslindale Square getting its upper floors back: Owner of another single-story building seeks to add three more floors, apartments
BPS teacher begins new school year with a review of the past year
Remembering Ruth Bader Ginsburg in Roslindale
Person shot on Washington Street in Roslindale, half block from where man was shot in July
Developer seeks to tear down building long used as a restaurant and bar on Hyde Park Avenue in Roslindale