Developer files plans for innovation building in marine industrial park, but with a lot less innovation than it had once hoped 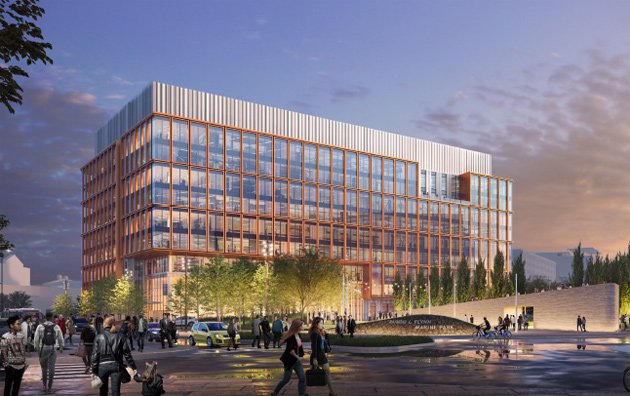 ICCNE, a subsidiary of Millennium Partners, today filed detailed plans for a 10-story, 381,000-square-foot building aimed at biotech research and development in South Boston's Raymond Flynn Marine Industrial Park - where it had once hoped to build an innovation complex seven times larger with aerial gondolas ferrying workers and visitors to and from South Station.

Even as late as July, ICCNE was still hoping to build a 900,000-square-foot building on the site and to call it the South Boston Innovation Campus. Today's filing says the building will be know more prosaically as 2 Harbor St.

The initial plans foundered after ICCNE was unable to secure development rights to a seven-acre parcel in the Raymond Flynn Marine Industrial Park that is owned by Massport.

In its filing today, ICCNE says it will replace a condemned warehouse and parking lot on the 4.6-acre site with a building housing "a combination of laboratory, office, and R&D uses" on land bounded by Harbor Street, Northern Avenue and the Massport Haul Road. Some 32,000 square feet will be devoted to "water-dependent industrial uses," as befits a building in an industrial park that focuses on marine-based companies.

The developer is proposing 325 parking spaces in a garage and two surface lots - with 220 of those reserved for valet parking, using a mechanized "stacker" system. The company notes that there is a Silver Line stop on Northern Avenue across from the proposed building's site.

ICCNE predicts that some 1,500 people will work in the new building once it's completed - and that it will pay $2.5 million into a city affordable-housing fund and nearly $500,000 into a city job-training fund, in addition to property taxes.

The company adds it will provide a key private boost to efforts by the BPDA - which owns much of the industrial park - to upgrade the area's sagging infrastructure:

No single source of funds, including the EDIC/BPDA, is available and able to pay for the significant infrastructure upgrades that are needed in the RLFMP. Therefore, thoughtfully planned and located commercial development within the RLFMP is intended to be an engine tofund needed transportation and utility infrastructure improvements. 2 Harbor Street is such a project, and it will marshal the benefits of the new innovation economy, tech, life sciences and cutting-edge research and development uses to support the historic and ever important mission of the RLFMP.

ICCNE hopes to begin two years of construction in late 2020 or early 2021. 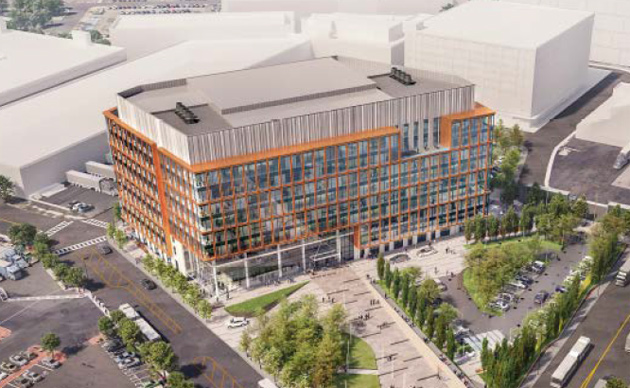 The developer is proposing 325 parking spaces in a garage and two surface lots - with 220 of those reserved for valet parking, using a mechanized "stacker" system.

No parking should be allowed for this building. Period. We have to stop allowing people to cheaply drive into downtown for work unless they're disabled or otherwise infirm. Enough.

Ain't gonna be cheap. Based on going rates in the area, it'll probably run $400/month apart from any spaces which are included in office/lab leases. If I had to guess, the surface spaces are a placeholder for a future building on the same parcel which would go up if/when this one reaches some target occupancy.

And, FWIW, that project would be in the South Boston Parking Freeze area (https://www.boston.gov/south-boston-parking-freeze). There are still spaces in that parking freeze bank.

I don't suppose that you've ever parked anywhere?

No parking should be allowed for this building. Period. We have to stop allowing people to cheaply drive into downtown for work unless they're disabled or otherwise infirm. Enough.

No one can possibly build a building focused on R&D without allowing for parking for the many visitors. These are people who will come looking for a job, trying to sell a tennant company on a product or idea. Often they will arrive or depart with "Stuff" driving from someplace as close as Logan or perhaps from New Jersey. These people along with your infirm or otherwise disabled need a place to park. [PERIOD]

I suggest that you go view some reality

Have you ever been to

Have you ever been to literally any of the 100+ year old buildings in our financial district? They manage to host people "looking for a job" and "sell companies on product ideas" without any parking at all and they've been doing it for decades.

Well -- perhaps when the 100 + year old buildings were new -- say just after the Great Fire of 1872 --- the Financial District was born in the aftermath*1 when there were no automobiles to speak of -- so then there were only need for some stables -- which existed on Beacon Hill and in the Back Bay, etc.

Cars became part of the Boston landscape circa 1900 and from that time on there has been a need for parking -- initially it was supplied by vacant lots [fires, etc.] then later Boston became a pioneer in providing structured parking -- e.g. The Motor Mart Garage built in 1926 in the Bay Village / South End*2

Subsequent to the Depression and WWII Boston built a bunch of city owned parking garages because of the lack of adequate parking downtown and in the other commercial districts of the city.

There are still a need for most of that parking and perhaps more.

Now you may have some argument to make in terms of new residential structures needing less parking than with which most currently have been provided. But for office and R&D especially the latter -- give it a rest.

Here are a few reasons:

PS: while the Fin Dist is getting more R&D type -- most of it is still mostly offices with concomitantly considerably less need for parking [because of the above reasons]

The fire also helped fuel Boston’s growth. The business community saw the burned area as an opportunity to expand its presence downtown. The city’s financial district was established where the fire had hit hardest and Boston soon became a key business center of the late 19th-century United States.

At the time of its construction in 1926, the Motor Mart Garage was the largest automobile garage in the world. Advertised as "more than a place to park your car," the Motor Mart housed auto-related services including washing and various repairs. The garage reflects the prevalence of transportation activity at Park Square in the early 20th century, especially bus and automobile. It is a major character-defining feature of Park Square, designed in a stripped classicism with Art Deco style details. The garage abuts and is adjacent to several historic resources including the Park Plaza Hotel (built as the Statler Hotel in 1925-27), the Armory of First Corps Cadets building and the Paine Furniture Building, both local Landmarks, and the Bay Village Historic District. It is one block from the historic Public Garden.

In 1998, Fidelity Investments and The Drew Company opened the Seaport Boston Hotel alongside the World Trade Center.

Facilities and Features
The property has 428 guest rooms and extensive facilities for conferences, meetings and exhibitions with over 180,000 square feet of meeting and event space. The hotel has four restaurants and a health and fitness center, including a swimming pool. Seaport has a 2,300 space underground parking garage

You seem to have missed my point entirely

There Chinatown/Financial District office buildings still standing TODAY that do not include any parking (including the one I work in) and they don't seem to have any problem at all renting out every square foot of space at some pretty insanely high prices. In our case a handful of employees pay (through the nose) to park in those local garages you described, but most get to work the way people have for a hundred years: Walking and taking the train.

I was going to say there’s not enough parking for this site. The entire Seaport in general could use more cheaper and affordable parking. Why should rich people be the only boy ones to park down here? And please no bigoted comments.

Because parking is insanely

Because parking is insanely expensive to provide, and capacity to bring cars in and out of the Seaport is already fully consumed, so how are those additional cars going to get there? We have to ration the vehicle space somehow. Price seems like a better way to do it than letting people idle their greenhouse gas emitting engines in traffic for hours.

The city should pass an ordinance in which any parking lots created in new development or major renovation must be free and open to the public. Leased, rented, or deeded spots are prohibited. Spots must be available 24/7.

If developers still want to add spots, let them.

Developers don't want to add parking. It's usually the city or abutters that request/require it. There is very little ROI in parking unless it is surface parking once you have to build a garage the profit goes out the window.

Parking is the cheapest

thing a developer can do to increase added value to property. For a 10’x20’ parking spot the cost to build is negligible but can add $100k to a unit. I would not list property for sale if it had no parking.

The average cost to build an

The average cost to build an underground space in Boston is about $120k and rarely adds that much to the value of the unit. The value added is also proportional to the sale price, so that's why you'll still see developers volunteering to build spaces in the most expensive buildings but typically not enough for every unit to have its own space.

I-90 runs underneath part of the site

So the developer is restricted. Instead of parking they could build a Silver Line station & corridor, a park, a plaza, etc. Its still up in the air.