Developers of South Boston power plant remain committed to housing, if not as much as they once planned 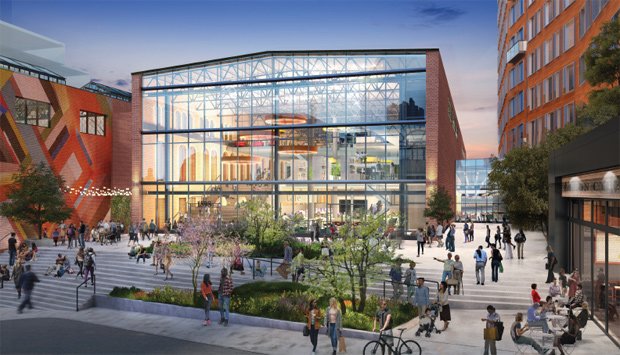 The developers who want to turn the old L Street power plant into the Next Big Thing on the Waterfront this week filed new plans with the BPDA that call for 750 housing units, down from the 1,344 they initially proposed on the 15-acre site.

That still might not be enough of a cut for some local leaders and residents, who don't seem to mind offices and stores, but who say all those new apartments will be the straw that breaks the camel's back in a neighborhood they say is bursting at the seams with development and more development.

The "supplemental information document" filed by Hilco Redevelopment Partners and Redgate Capital Partners for their proposed L Street Station calls for an overall decrease in the size of the project, from 1.93 million square feet to 1.78 million, much of that achieved by cutting out plans for so many housing units. But the plans do call for an increase in the amount of office space, from 368,070 square feet to 470,000 square feet - and the addition of 330,000 square feet in R&D space, something the initial filing had not included at all.

The new proposal also calls for a new 14,000-square-foot community space, and an overall decrease in parking spaces, from 1,397 to 1,214. Also, residents of the new spaces better not think they can just park anywhere they want in South Boston:

The Project will provide 120 parking spaces to neighborhood residents on nights and weekends at a discounted rate within the parking garages in the commercial buildings. The Project will also enter into an agreement with the City to waive resident parking stickers for apartment residents on the Site.

The project still also includes retail space, including, of course, a food hall, but marijuana-related businesses will have to look elsewhere - nobody's going to be getting any bowls or tinctures or fancy glass bongs at L Street Station.

The developers hope to begin the 10 to 15 year build out with demolition this fall.

Proposed rendering of entire complex (original turbine halls and 1898 buildings, in blue on the right, will stay): 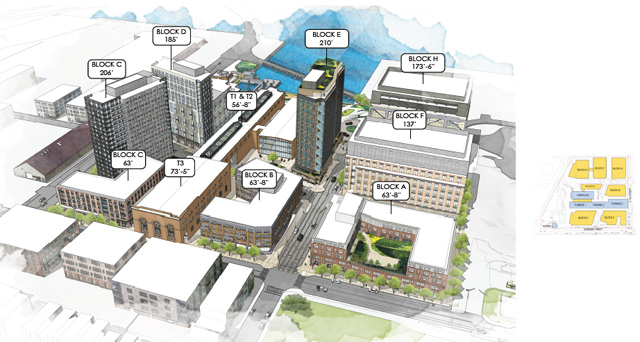 Shocker. NIMBYs want stores that they can patronize but not housing that other people need.

Housing that no one from this

Housing that no one from this area will be able to afford.

"who don't seem to mind offices and stores"

"who don't seem to mind offices and stores"

This is mind boggling. Presumably the people who work in these offices and stores will need places to live. It's this mindset that offices and stores are okay but homes are bad that saw the region add 245K+ jobs over the last 10 years, but only 71K housing units.

is the lack of parking. That's mind boggling. Whether residential or commercial where are the THOUSANDS of people going to park? And please no bullshit about Uber and our crappy transit system.
And on another note this site is contaminated and has a residential restriction on the deed.

Less parking = fewer people driving because "it's too hard to park there."

Ink Block has very little parking because the neighbors were told nobody would drive there. Now they have a full time valet for the only parking lot on the block. So many people drive there you have to que to park.

Not the best example

Most of those cars are people coming in from the 'burbs to shop at the grocery store.

But looking different - how nice would that spot be if there were a park with trees instead of a parking lot....

See tar island on Emerson St for an example

People do not drive into the South End

from the "burbs", to shop at Whole Foods.

And just imagine how much

And just imagine how much worst the traffic would be, and how much less housing would have fit on the site, if they had built twice as much parking.

The problem isn’t that there isn’t enough parking. The problem is that they don’t make any effort to ration it through the usual method that we ration everything else that does not have infinite supply (like housing!) which is: Charge people to use it! But no Texas-based company could ever bring themselves to do such a thing.

The problem with the Whole

The problem with the Whole Foods parking lot at Ink Block is that it's free. If they charged even a small hourly fee to park there, I guarantee a lot fewer people would park there.

Are you truly unaware of the

Are you truly unaware of the fact that hundreds of thousands of people around here don't have a car? I don't even have a drivers license. This is a real city, not a suburb in Iowa.

Magoo sign the P&S? Magoo is in. All in. Magoo.

I honestly don't get the people arguing that, apparently they never taught supply and demand / economics back in the 60's - 80's BPS?

Now, if they want their property values and property taxes to continue to skyrocket, pricing out their kids from taking over their single family row houses, go for it! Less housing benefits entrenched snow birds.

Me? Put in a Market Basket and build all the housing you want as long as the Edison turbine building becomes a community center and they go out of their way to offer Chapter 91 harbor access.

L street / summer street is already a mess, and is just going to get worse without better public transit / a comprehensive seaport / southie transit plan. Transforming acre after acre to more office space is just going cease up the roads even more.

Housing and retail/service businesses would at least make it a somewhat contained neighborhood where people can sleep / work / play.

Curious how much 'unused' parking is in the metro area vs central Boston. Although I know a lot of folks that live in brownstones and rent a space in a development's garage, so we have some instances of over-capacity parking for the development itself...

Needs to be said again and

Needs to be said again and again. Every single rational person who understands we need more housing in this city and region needs to go to these community meetings, email the BPDA in support, email elected officials in support. We can lament whatever we want on UHub or elsewhere, but the NIMBYs are the ones doing the talking to the people who make these decisions. That's why we have people like Councilors Flaherty and Flynn doing their bidding time and time again in Southie, for example. But it's the case all over the city and towns inside 495.

This is insider trading at it's best. The property when being sold was to have no residential units. Therefore the price dropped. The only people that can lift the no residential clause is Massport . Well guess who's former employee hidden in the group is. A former Massport employee. It doesn't get much more sketchy than this. The fact that no one is speaking about it shows all of us the right hands are getting greased. What's next paddle boat tours of a major working industrial port? Im pretty sure giant container ships will have trouble navigating around Tyler from Ipswich in his canoe for his morning exercise.

There is already such a

There is already such a problem with traffic in this city. And next to a port is not the place for residential units. This will cause so many more traffic problems. Wish you would realize this makes no sense and will be harmful to this city.

The demand for housing in

The demand for housing in Boston is here whether we want it or not. We NEED to provide more housing unless we want Boston to become a city that only rich people can afford to live in. If we don't want all that new housing to make traffic and parking problems worse, we need to NOT build very much new parking, and we need to price existing parking appropriately and expand and enhance public transit, walking, and bicycling options.

When people decide where to live, they will look at the parking options available. If it's free and plentiful, people will bring lots of cars. If it's not, they won't.

Look at the plans if you

Look at the plans if you think this has anything to do with giving the community affordable housing you are way off, just look at the prices of new condos in the area, all the ink block has is a Whole Foods and a few small stores and their prices are insane nothing in that place will be within the budget of anyone living or working in the area now it’s all about building southie up as a super rich place to live which will push people out of the area and increase rent for everyone

There is no conspiracy behind

There is no conspiracy behind this. That is just what basic new apartments go for in Boston right now. If the developer sold these units for less than that, someone would just buy it and flip it right away, because there are actually people willing to pay that much to live there, despite the fact that it is in a no-man's land near a highway. And if you think that's crazy expensive, you should see how much a new apartment costs in a neighborhood where people actually want to live!

Clearly it's a sensible

Clearly it's a sensible public policy for the city to prevent newcomers from parking on public streets. Streets belong exclusively to the specific people who park on them today. They've earned it just by being here for a while. Anyone who shows up in the future has no right to equal protection under the law.

Man who wheeled both daughter and shotgun in stroller to South Boston gun sale gets 21 months
Nice beach day
Car bursts into flame in garage of Fan Pier building under construction
Room for one more Southie packie, board decides
Area Aussies, chefs team up for benefit for bushfire victims
A world-class city needs a Hyatt with a liquor license in the Seaport, lawyer tells board