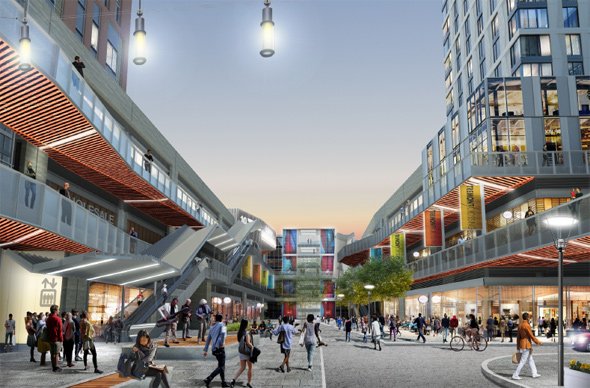 Architect's rendering of the mall part of the development.

The developers who own the rights to several acres of what have become urban wilds on Tremont Street across from the Boston Police headquarters say they're so close to closing the financing they need for a $473-million multi-use complex that they've scheduled groundbreaking for April.

The project, first proposed in 2011, now calls for a series of buildings on the 7.25-acre parcel that would feature a mall with a Burlington Coat Factory, a BJ's, a cineplex and an indoor rock-climbing facility; 727 residential units; office space and a museum - as well as 1,371 parking spaces.

Roughly 20% of the residential units would be marketed as affordable, to people making between 60% and 100% of the Boston area median income; the city normally requires only 13% affordable units. Most of them would be in two towers; with nine townhouses built along Whittier Street.

In a BPDA presentation yesterday, Elma Lewis Partners, the original developer on the project, and Feldco Development, said they expect to close in March on the final $28 million of financing they need to get started.

March is also when the developers hope to sign a lease for one of the mall's larger tenants and go before the Boston Zoning Commission to win approval of the "planned development area" they've worked out with the BPDA, which basically would strike the lot's current zoning in favor of the plans drawn up by the developers.

The developers will spend roughly $13 million for a museum featuring the work of Afro-American artists.

The city awarded the land - left over from the I-95 extension halted in the 1970s - to the local Elma Lewis Partners during the Menino administration. It filed a formal letter of intent in 2011 but ran into a seemingly never ending series of delays, so many that at one point the city threatened to just take the land rights away.

Is it me, or does 1371 parking spaces seem like a lot? Columbus Ave is already very congested much of the time. This is very close to the Orange Line and multiple bus routes. Do we really want that many people driving here?

you're gonna need some parking

"... a mall with a Burlington Coat Factory, a BJ's, a cineplex and an indoor rock-climbing facility; 727 residential units; office space and a museum ..."

That's a lot of stuff. I'm as pro-TOD as the next urbanist goober but, I dunno. I'm just glad the overgrown vacant lots and abandoned buildings are getting replaced by something.

Yeah they've really packed in a lot into the complex. One other thing I wonder is how well a BJ's will do here. Most city dwellers don't have a ton of space for bulk items at home. I hope the BJ's doesn't pull in people driving in from the suburbs. Stores in the city should primarily serve those who live in the city!

Yeah I'm with you on the BJ's

Yeah I'm with you on the BJ's and the amount they're planning to put in there - it's dense. Not sure that a BJ's is a match for the local residents, most of whom live in apartments or dorms at NU. I'm happy to see the lot will finally be developed, As someone who goes through that intersection every day I'm not thrilled that much of the development REQUIRES people to drive there. The traffic at that intersection is brutal at rush hour, cars and buses jamming up the intersection as they try to squeeze through the light and end up blocking the box. With a major T stop right across the street I'd like to see a development that is more transit oriented and geared toward the needs of local residents.

just because we live in the

I'm having trouble coming up

I'm having trouble coming up with something more anti urban than a BJ's and 1,300 parking spaces.

I live just over a mile from the site

I have a big house, basement, and my own parking space. Most of my neighbors do, too. I'm excited to have a BJs nearby. Driving to the suburbs to save a few bucks is not awesome. Going to South Bay (farther) and fighting the crowds at target is not awesome. We'll be regular shoppers at BJs. I'd prefer Costco, but I'll take this.

Having a movie theater this close is a nice bonus, too. I just hope we get a couple of decent restaurants.

The people don't know what

The people don't know what they want and will never be happy. That area was a Merit gas station and nothing else until you got up to to Roxbury Crossing and the Hertz garage. Whatever they build will be an improvement, and if it dont fly, it will morph into something useful. That area is too close to medical and educational institutes to stay fallow, Who knows maybe Boston Schools might even build a trade school over there somewhere.That area is gold , Jerry , gold ! Just has to be mined .

Right, but this isn't just

Right, but this isn't just housing we're talking about here. That parking lot is going to generate a lot of vehicle trips. Why not encourage this developer to build something a little more pedestrian/transit oriented so that we don't add all of those cars to an otherwise very transit-accessible neighborhood?

I don't know how parking is estimated for developments

Yes, sounds like a lot but who knows how they come up with estimates of needed spaces?

Here's the breakdown for "permanent jobs", which means jobs after construction is completed.

Use South Bay as a recent example of how much parking is typically built. Also, when they planned the Seaport, the estimate was that 38% of workers would live in the neighborhood, not needing to use transportation to get to their jobs. I don't know the breakdown of the rest, drive vs. public transportation, but there you are.

Sell spaces or use during snow emergencies??

I hope this is a home run success!

However, I worry that things have changed since 2011. "Burlington Coat Factory" is now just "Burlington" and they have closed some of their locations. BJ's always comes up as being on the brink of bankruptcy. Netflix is killing movie theaters. And who builds malls anymore? Looking forward to being proven wrong.

so, let your vacant lot, house or open fields become so derelict that the city practically begs you to fix it up via up-zoning. A shopping mall is not of the fabric of the area; the fabric maintained by long-term residents and attractive to new residents.

I don't know the area real well, but it seems like a grocery store would be a better fit than say a BJs.

There are two Stop & Shops

There are two Stop & Shops about 10–15 minutes away, as well as Tropical Foods just around the corner, and other smaller markets in the area.

That said, I usually still head down to the Star Market on Huntington for groceries, because I haven't found good produce in the area, but I might just be picky.

They have food products there

They have food products there, and a deli.

A couple of words in response to this announcement

I'll be there with my Easter bonnet on. I am sure I will be the only one to hold them to that date.

At a loss to understand

The .pdf shows a six-story garage

Unsure if there are underground levels as well.

Hopefully they hire plenty of

Hopefully they hire plenty of security.

We will see how this goes, but it is good to see that here is a real plan, I've lived in the neighborhood for 18 years and heard lots of plans for 'P3', and all of them have died on the vine. I was also on the PRC for the Bartlett Yard project, that was nearly 10 years ago, and that project is just now coming really coming to life, but is is rather different form what we had agreed upon.

With the Bartlett project, traffic patterns and loads were pretty much ignored. That stretch of Tremont can be miserable to drive many hours of the day, hopefully they will deal the increased load on the existing road ways. Perhaps a pedestrian bridge over Tremont might be in order as well.

One can go down to the Ink Block Whole Foods most evenings and weekends to see the absolute shitshow that even a moderately sized (and usually over capacity) parking lot causes on the surrounding streets.

Or... One can go to the Back Bay Trader Joe's and see one of that chain's most profitable stores (OK, I don't have anything to back up that claim, but I have heard it bandied about now and again). It is the chain's smallest location though. It has no parking.

Maybe they'll add a parking garage for the Police Headquarters so those folks can stop parking on the sidewalks on the surrounding streets (like Station and Mindoro Sts).

Are malls still a thing?

Seems like a good spot for an Ikea, just saying...