OriginallyFromDotParker: Dig, if you will, this oral history of DigBoston

When you weave all these conversations together, you end up with a story about a company; therefore, I think this is a story about capitalism. In a broad sense, it works as a microcosm for the American economic paradigm. Every subject/character in the tale works, some of them rack up debt, and nobody gets paid enough.

This project started in the spring of 2016, when former Dig Editor-in-Chief Joe Keohane pitched me the idea of composing an oral history of the Dig to commemorate the paper’s 20-or-so-year anniversary. As the project snowballed in scope while deadlines came and went, I had the quixotic notion to turn it into a book. As we see what happens with that, DigBoston has agreed to print the manuscript in serialized morsels. And here we are...

...On that note, I hope you all enjoy this first installment of Good Luck In Sicily: The Oral History of DigBoston. If you think this one sucks, maybe one of the upcoming episodes will tickle your fancy. They’ll be running every few weeks, and of course compiled online as well. In my personal favorite, (spoiler alert) celebrated social commentator Luke O’Neil poops his pants, so keep an eye out for that issue.

As Thompson eloquently laid out: the first three installments of Good Luck in Sicily: An Oral History of DigBoston ran in the print edition and on the web. They can be found in the links below:

AN ORAL HISTORY OF THE DIG EPISODE 1: SHOVELIN’

AN ORAL HISTORY OF THE DIG EPISODE 2: THE FIGHT FOR FREE

AN ORAL HISTORY OF THE DIG: EPISODE 3

Here's hoping that the Dig delivers on that promised "Luke O'Neil pooping his pants" story.

Dig, if you will, this history

Of Chris Faraone engaged in a piss
The sweat of his body covers cops
Can you, my hipster, can you picture this?

Dream, if you can, a dive bar
Tall Pabst cans with labels of blue
Editors take curious stances
They fan the flames, the flames between cops and you

"Good Luck in Sicily" covers all the editorial eras of the Dig. Glad you're so excited about the series, Will. Thanks for helping boost the visibility of this post!

Faraone has been with the Dig for quite a while and his current EIC work has helped steer the Dig through a pretty difficult time.

That OriginallyFromDotParker ImpacT: everyone is thinking of song parodies on UHub now and I love it! 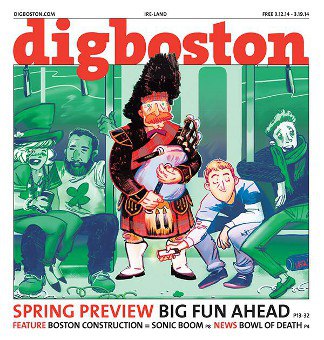 Wearing my "I HATE THE GREEN LINE" shirt

Knew Joe way back, through music & some writing gigs, and the occasional pint at Foley's. A great guy & no small part of why tattooing is legal in our fair state today

but I don't believe I've ever met him.

I didn't know about his tattoo advocacy either. That's incredible.

The Boston Public Health Commission has Body Art Regulations now (as it should!). Thanks, Joe Bonni!