In Dorchester, you don't need a boat to go on a sea cruise 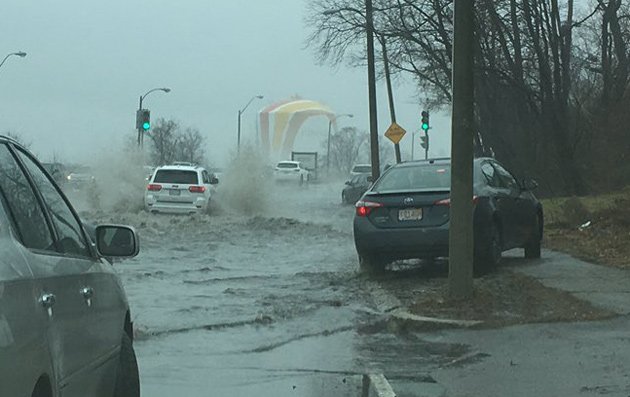 For some reason, Morrissey Boulevard in Dorchester remained open in the middle of a rain storm at high tide early this afternoon, giving drivers the chance to experience the thrill of going out to sea - unless they were too timid and instead took the easy way out by driving on the sidewalk near Malibu Beach, as Timmy shows us. He also had a question for DCR:

Any status on the redesign?

Morrissey boulevard is an absolute nightmare AVOID IT @universalhub pic.twitter.com/GxxMdGHuZV 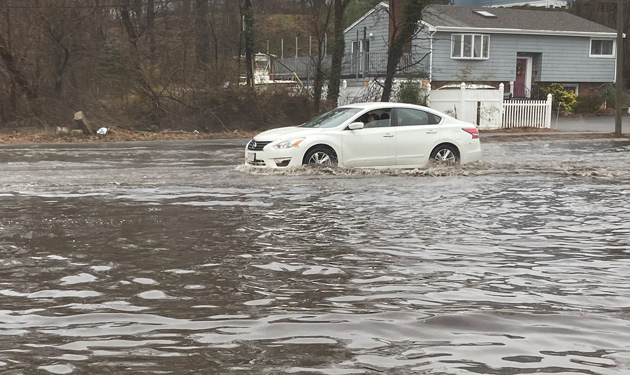 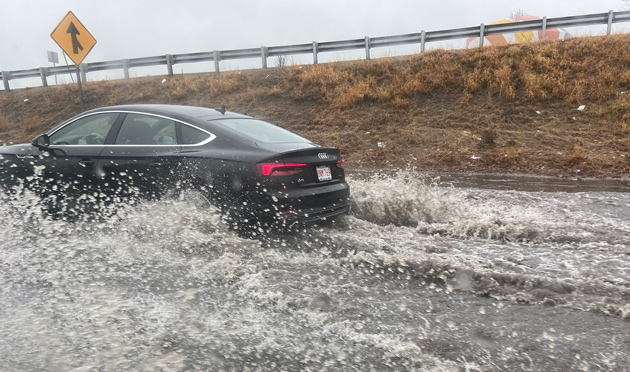 Is to fly through without slowing down. Come on people, nobody’s going to drown.

200 years ago that spot was under water all the time.

They should have built it better.

That spot had not yet had several feet of fill dumped on it.

Sea level rise is more intense in our part of the world - the increase in sea levels is double the global average now.

But I will believe that you are serious about your climate denial when you buy some waterfront property. Go ahead - money meets mouth.

I can only be scared by fake predictions one at a time.

I am still working on these:

Y'all are making stuff up faster than people can be scared by it. Could you wait until the fake predictions actually FAIL before going on to the next one?

(I did peek ahead out of morbid curiosity. Manhattan better be under water in four years or you all fail again)

Once again: instead of doubling down on bad references to misinterpreted science, just put your money where your piehole is and move to waterfront property.

Put up or shut up.

While you are at it, type your bullshit on a Comodore 64 or equivalent - you know, the kind of technology that was around in 1978 - if you refuse to note that remote sensing and ensemble modeling have come quite far since then.

According to this thing:

While you are at it, type your bullshit on a Comodore 64 or equivalent - you know, the kind of technology that was around in 1978 - if you refuse to note that remote sensing and ensemble modeling have come quite far since then.

Don't knock it. It got us to the moon and back.

Just because it could not help morons from making dumb predictions is NOT the fault of the processing power. It was pure PEBKAC.

what exactly do you think is the end game for those who warn us about climate change?

the scientists, drunk on power, rise up and form a one world government hell bent on making sure free people don’t drive their cars too much?

what exactly do you think is the end game for those who warn us about climate change?

Well-intentioned but epic prediction fails hyped up by manipulative media, politicians and/or lefties for cash and prizes.

Think about why little old ladies are taking off their shoes at airport security.

The sky IS falling!

It amazes me that so many people remain willfully ignorant about climate change. It’s STUPID and it’s selfish.

The facts are all there proving the crisis is real, but you are too stupid to accept them and don’t care either way because YOU will be dead and gone when we reach the critical point of no return, and plant and animal life as we know it can no longer survive. Your grandchildren might see that day though.

so, you don’t know then

you‘ve compiled a list of things — some of which seem pretty uhh.. serious? pretty sure AIDS is a horrible disease — and alluded to some shadowy entity that stands to gain from panic around those things without actually saying anything substantive.

pretty sure AIDS is a horrible disease

The media and many scientists tried to pawn off the idea of AIDS hitting the straight community.

????? do you think straight people aren't getting aids in large numbers????

Yeah thank goodness that prediction turned out to be fake news and that "in 2017, heterosexuals accounted for 24% of HIV diagnoses." Wait what point was I making?

You're not proving what you think that you are proving.

1. I remember "global cooling". It was a couple of best-sellers and some splashy articles in magazines. Most ot the work on climate change has focused on warming.

2. Ozone holes are less of an issue now because people responded to the warnings and
there were bans on Freon, a major cause of it.

3. Peak oil predictions are only off in timing. If there are limited supplies of oil on earth, someday we will have "peak oil".

4. If I were an academic looking to make money on climate change, I would be one of the few competing for money from the Fossil Fuels lobby or the Kochs for papers denying climate change.

As for sea level rise, I give you a retired oil exec writing for Forbes. https://www.forbes.com/sites/uhenergy/2018/06/15/is-the-ipcc-wrong-about...
Read it all the way through.

5. There are plenty of countries for which overpopulation is a problem. Bangladesh,
India, China come to mind.

6. SARS is less of a problem because many steps have been taken to prevent it. It had a mortality rate of about 10-11%, but 50% for people over 65. That's worth worrying about.

8. Some of the panic about Y2K was due to the fact that a lot of software saved space by only using the last 2 digits of the year. A lot of work went into fixing this before Y2K arrived.
(I did some of it, so I know!). Another case of a warning getting an effective response.

Just because some people are panicking, does not mean that we should ignore warnings.

In other parts of the world, such as Nigeria, AIDS mostly affects straight people.

You gotta watch out for those syndromes that know what country they are in.

6 feet up and 1300 feet away are two different directions.

There are real problems we are all facing that aren’t going away and real forces trying to downplay their significance. We stopped screwing up the ozone layer because we straight up stopped using the stuff that was doing it. Go look it up.

Remember smog problem? Some countries haven’t improved the air as much as we have and still people want to roll back the clock so they can see for themselves how bad it can get.

Was the cancer from cigarettes a fake crisis? Let’s all light up in hospitals again and smoke in our day care. Seriously, be cynical, or better, be skeptical. But, don’t be stupid.

I got a link

We stopped screwing up the ozone layer

I got a noaa link for charts like these:

that can argue any side of the ozone hole argument.

I got links for scientific claims on any side of the argument also. It is all over the place.

Sounds like you're less a critical thinker than someone who collects specific pieces of information that, when everything else is ignored, create enough uncertainty that you can just do whatever you want.

This isn't a commendable habit.

You think you know more about

You think you know more about science than scientists. You are deluded. Another nut job republican. Do you think you can beat LeBron at basketball too?

You think you know more about science than scientists

I am 8 for 9 on picking the right side over failed scientific predictions.

Charlie Brown, meet (or rather do not meet) football.

Go look at coastal real estate, honey. Your budget is the limit that you can pay. Show us all up!

I am not dumb enough yet

Go look at coastal real estate, honey. Your budget is the limit that you can pay. Show us all up!

According to you, people who buy waterfront properties are not smart because climate change.

Past oceanfront sales to these "stupid people" are all over 2 MILLION DOLLARS each in my town.

All these dum-dums got REALLY rich and bought up all the waterfront property. What maroons!

I am not dumb enough yet to afford a 4 million dollar house. I only have enough dumb to want one... but so does everybody else.

You see, Einstein, your weak tea fairy tales collapse in reality. Just like ALL those predictions. 4 million dollars is reality. I choose reality. What did you choose again? Oh yeah... *snicker*

Global warming is a bitch

I’ve noticed this place go from never ever flooding through my whole youth, to flooding a bit,to flooding every now and then, to this.

I beg to differ.

BC High has always been there.

BC High has always been there.

Should have stuck with original 1905 plan

The original plan for this roadway, later named after MDC Commissioner William Morrissey, was to run along the railroad tracks much further inland. In 1906, it was moved to the current coastal route after extensive filling of wetlands. It's no surprise that Mother Nature would occasionally reclaim what was hers to begin with. This has been occurring since the road was built.

happens all the time, why is the media surprised?

this floods all the time during high tides & storms where the water is pushing inland... why is the media "surprised" (even when their own weather people tell us it's going to happen?) From the State DCR: https://www.mass.gov/service-details/morrissey-boulevard-redesign-for-re...

The media is not surprised by the flooding

Well, at least not this one little tiny-sized medium.

What was surprising was that the road wasn't shut to keep people from driving into relatively deep water - usually the state's very good at closing off Morrissey beforehand.

Surprised? Every noreaster on a high tide...

The TV news dutifully dispatches a crew down to Cohasset to film the destruction.

Man under the influence of something tried stumbling to Fields Corner with a loaded gun, police say
Digging into the history of the hole that opened in Ronan Park
Fire on York Street in Dorchester displaces 14
Woman shot to death at Bowdoin and Washington streets in Dorchester
Citizen complaint of the day: When did Savin Hill Avenue get an eternal flame?
One dead, one threatened in rage incidents in Belmont, Dorchester; Dorchester rage involved trash barrels