Double-rarity building proposed for Lower Roxbury: All units would be affordable and its facade would be all brick 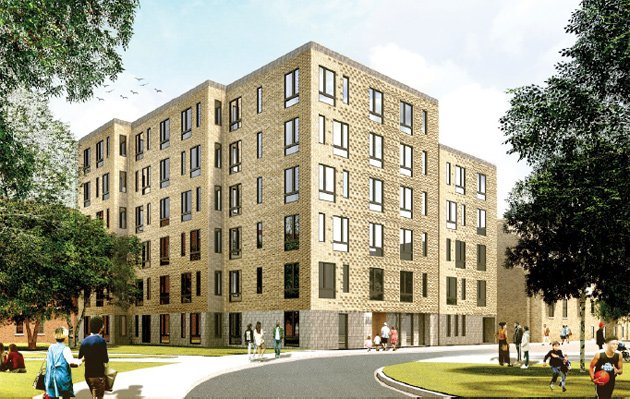 Architect's rendering of view from Southwest Corridor Park, with birds.

A pair of developers have filed plans for a 6-story, 47-unit residential building off Northampton Street and the Southwest Corridor Park in which all the units would be marketed as affordable.

The proposal, by Transom Real Estate of the South End and Harbor Run Development of Cohasset, would replace an existing parking lot, behind the Mass. Ave. block that includes Wally's Cafe, where Northampton Street ends at the Southwest Corridor Park.

Based on its "transit oriented" location near the Massachusetts Avenue Orange Line station and bus lines, the developers have proposed no off-street parking. The building would have a loading area for cabs and ride-share vehicles.

The building would have 16 studios, 19 one-bedroom units, 7 two-bedroom units and 5 three-bedroom units. The developers have yet to decide whether to rent the units as apartments or sell them as condos. City requirements only call for 13% of units to be rented or sold as affordable.

Transom and Harbor Run say the building, like most mid-rise buildings today, would have wooden construction atop a concrete and steel frame. But in a nod to the surrounding buildings, the proposed Northampton Street Residences would eschew any modern panels and instead be clad entirely in yellow brick. Also:

Central to the urban design strategy of the Proposed Project is its relationship with the adjacent Newcastle Court building. The Proposal pulls back along its eastern edge, creating a shared pocket park between the two buildings with plantings to soften the transition between the two buildings. The dimension and scale of this pocket park is similar to that found in the exterior courtyard of the Newcastle Court building and will serve as an amenity to residents of both buildings. 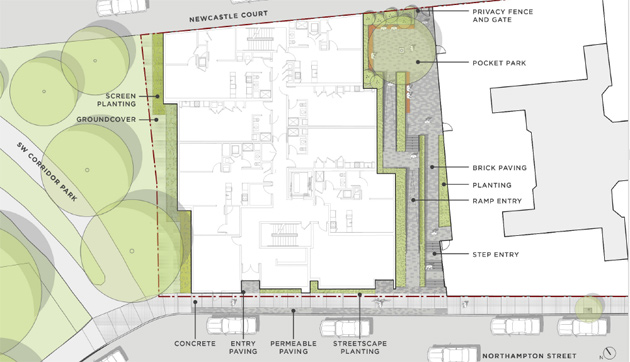 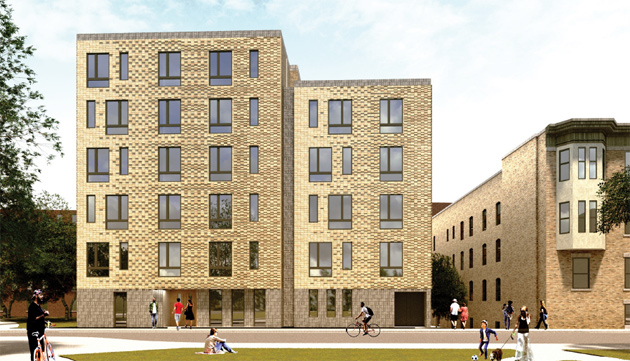 - The developers are absolutely right not to have parking that close to the 1, the 39, the Silver line, & the Orange line. Hope they stick to their guns.

- Good use of a useless parking lot. It's been nice to see an uptick in new construction that doesn't require tear downs.

-- As much as I want to be excited about the entire project being income restricted, considering they can still get over $3000/month rent for a 2 bedroom & be considered "income restricted," (or sell the same for $445k), I'll wait & see. Thinking about it, I'm surprised more new developments are not billing themselves as 50% or more "income restricted"-- they won't lose any money & it engenders warm fuzzy feelings, warranted or not.

- During the summer, I walk the SW Corrider/Lallement at least 4 time a week, weather permitting. If I'm visualizing this right, the stretch by the Carter School next to some neighborhood gardens, across from where I think this site is, has become something of a shooting gallery run-off from Methadone Mile. We'll see if this helps by bringing attention & assistance to the people there, or hurts as they're chased away.

More details in the document

Wow, I can hear your sniveling from here.

I look forward to seeing you at all the neighborhood meetings while this is being discussed!

I'm in favor of it. Why would

I'm in favor of it. Why would I go to meetings for a building I support that's not in my neighborhood?

My points are drawn from looking at the document.

This is in the landmarks district, which is probably why they are doing a better material.