Driver goes around barrier on closed Storrow Drive, car rolls over, crashes into building, he dies 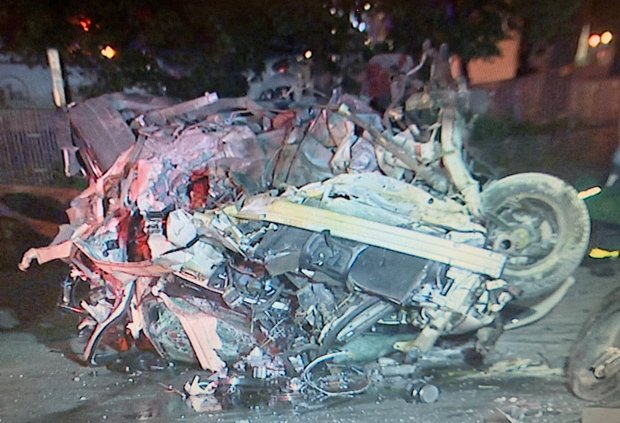 Some of the remains of the vehicle. Photo by KMV.

KMV reports on a crash shortly after 1:30 a.m. on Back Street at Clarendon Street in the Back Bay, apparently caused when a driver decided to take some friends on a spin down Storrow Drive in his 2000 Cadillac sedan, even though it was still blocked off with barriers for the post-fireworks cleanup.

He reports one person was ejected from the car as it crashed.

State Police report the ejected person was the driver, Alexander Galanis, 27, of Stoughton, who was pronounced dead at Mass. General.

State Police add that while the crash remains under investigation:

Evidence suggests that prior to the crash, the operator drove around barriers at the Charlesgate East On-Ramps to enter the closed portion of Storrow Drive. 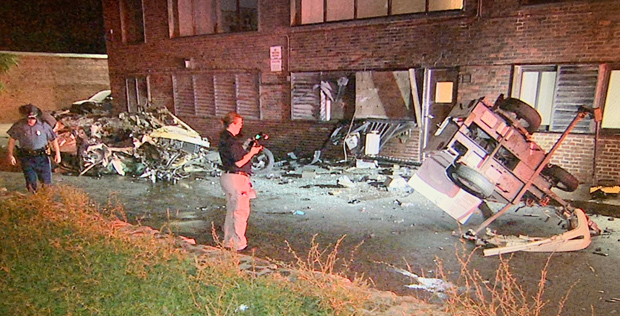 You're a heartless ass.
Who doesn't have the courage to write out that acronym.
This tragedy is affecting a lot more people to hang just the driver.

Not a tragedy. A completely avoidable situation brought on by the deceased himself.

Had it not been Darwin's Own Goal, it would have been a tragedy when he killed a worker cleaning up after the celebration.

Sorry, but what happened here isn't a tragedy - it is reality coming to collect. If you have ever had a family member run down by a speeding dumbass drunk - like my father was while working a paving crew - you would save your sympathy for people who are injured by dumbass drunk assholes with motorized weapons like this one and not someone who could have killed multiple other people because he was just too special to follow basic safety rules.

Tragedy for the two passengers

who were injured by this drunk* driver. Nothing about this was their fault (but also, nothing was the fault of the DCR or State Police either.)

* I don't see anything in the reports that actually says he was drunk, though.

Dude paid with his life. RIP.

I wouldn't want to have survived that crash

I can not imagine the injuries.

that others were not hurt. With tens of tbousands of pedestrians there just a couple of hours earlier.

So after all those barriers they put up...

...you're able to just drive around them?

It IS a safety thing

Sometimes you need quick access for EMS/BFD/BPD. People are expected to obey orange cones and stuff. Blue BPD sawhorses. Would you hit that?

That was a car?

And two people actually made it out alive?!?

So is this another complete failure from those that are tasked with protecting us from dangerous driving?

All the security theatre down at the Esplande and the actual biggest threat was some clown speeding on a road that they shouldn't have been on. Awesome.

Will there be any accountability for this?

"Will there be any accountability for this?"

Yes...'Alexander Galanis, 27, of Stoughton, who was pronounced dead at Mass. General.'

Come on now, you're not that dumb

You know I meant the State Police/whoever the hell was supposed to prevent vehicles from getting onto this closed road.

See the trailer thing in the last pic? That's a government owned trailer. He nailed it.

What do they have to do...build a wall?

Come on now, you're not that dumb...probably.

We've tried nothing and we're all out of ideas!

Yeah there are ways to install road-based bollards that rise and contract based on needs/emergency vehicle access, London has some great examples.

Oh but that costs money and where will we ever find it? Oh well.

We could try speed govenors that are gps-tied to changing speed limits but oh no muh freedoms. Can't do that, also money.

You're here to make low-effort jabs at those of us that want change, offer up some solutions unless you're ok with sticking to the status quo.

This part of Storrow Drive is closed two days a year

July 3 and 4. It used to also be closed for WBOS EarthFest, but they haven't had one at the Hatch Shell for several years now.

If this was a road that closed every week, such as for a farmers' market, the barriers you are suggesting might make sense.

But wouldn't preventing even just one crash be worth it?

I mean thats the mantra many speak on about say, helmets, you shouldn't HAVE to wear for the few times you might need it but wouldn't it be worth for that one time?

Isn't that the point of all the security theater down on the Esplanade and other places? We're gonna have to consider road-based bollards like this as we begin to limit/ban cars from certain streets, implement more dedicated bus lanes and tackle the threat of terrorism.

Why not take it another level and then we have additional measures to control traffic in emergencies?

Car govenors tied to GPS, sure, will be an issue for older cars. But its not new tech, variations of them were used on early steam engines and early cars. BMW, Audi, Volkswagen and Mercedes-Benz limit their production cars to 155 mph (lol.) We can't we cap them further to not exceed the highest speed limits and use newer cars/tech to limit further based on varying speed postings?

Make it mandatory for all-registered cars, install older tech for older cars and just be done with it. The status quo ain't getting the job done.

The car was part of it.

The car was part of it.
Those things are inherently dangerous.

Idle, they are storage tanks of flammable poisons.
In operation they are kinetic weapons.

And you just KNOW a cyclist came out of nowhere to swerve in front of the driver who reacted.

Having seen behind the

Having seen behind the curtain on these types of events, I can promise you that during the height of the event, many eyeballs would've been on this vehicle.

But at 130 AM, the only folks out there are the DPW and DCR workers picking up the mess so that the morning's commute goes on. (there are others too, event rental people..)

You might get a couple of Staties left over that are on that area's patrol - but for the most part, all of the details have been relieved. I'd be surprised if they even had sand trucks still blocking the roadways (remember, those guys are on the clock too) - and not just some saw horses or barrels.

edit: I give up, I don't get why my reply isn't nesting in response to the above comment.

That takes care of the needs for emergency access and late night barriers.

Automate traffic enforcement as best we can and pass the cost onto motorists.

He's lucky he didn't also kill some pedestrians or cyclists

A lot of folks, including me, like to take advantage of the July 3/4 Storrow Drive closure to go for a little stroll or bike ride. Fortunately most or all of us have gone home by 1:30 am.

The English have a term for this..

The curse of Storrow.

Having a park with a scenic carriageway turned into a speedway gets the dead MAD!

Never mind the bollards, here's the concrete barriers
Enough with the love locks already, let's get us some art and messaging up on that Mass. Ave. fence
Jordan Hall concerts cancelled through at least February
A virtual Mother's Day
Not everybody looked askance at some al fresco dining today
Does anyone know why the John Hancock Weather Beacon hasn't changed in at least 3 weeks?