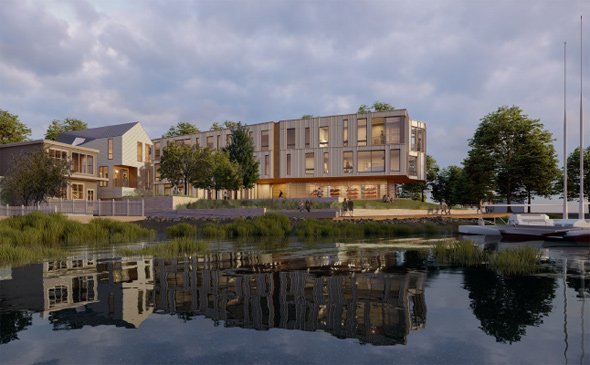 In East Boston did a developer
A stately complex decree.

Developer Ryan Acone has filed plans for a three-story, 19-unit two-building complex at 181-183 Coleridge St. with a 22-space garage and a "facility of public accommodation," or community room and a stretch of public Harborwalk.

In a filing with the BPDA, Acone says his proposed $9-million Residences at Coleridge Coast would be "transit oriented" because it is a 15 or 20 minute walk from the Wood Island and Orient Heights Blue Line stations. They would replace what is now a vacant lot.

Because of its location right on the water, Acone is taking steps to deal with rising sea levels over the coming decades, including a first floor that is higher than called for in city sea-rise-related regulations, the placement of mechanical equipment on the roof and creation of "a floodable waterfront park which is able to accommodate periodic storm surge and sea level rise while still allowing water to recede without long term flooding and ponding."

Acone adds the buildings are designed to make them look "more in scale" with the surrounding buildings:

Slenderness of the massing of the two structures allow for light and air to circulate between the buildings and for greater visibility into the site toward the Boston Harbor. Careful articulation of the building massing mediates between the characteristics of the adjacent properties and the proposed project that makes them appear much more in scale with the surrounding context. The architectural design of the Project recalls the details of the context, simplified with sloped mansard-like and gabled roofs, window bays, and proportioned windows. Patterns of materials are also in scale with the materials of surrounding houses, such as siding and masonry.

The filing does not specify if the units will be apartments or condos. Two of them would be rented or sold as affordable.

Acone hopes to begin construction this August, with completion scheduled for September, 2020. 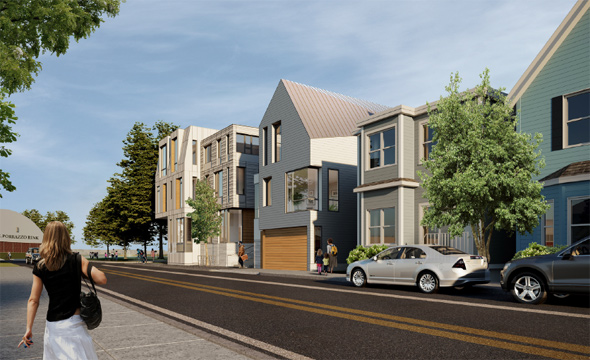 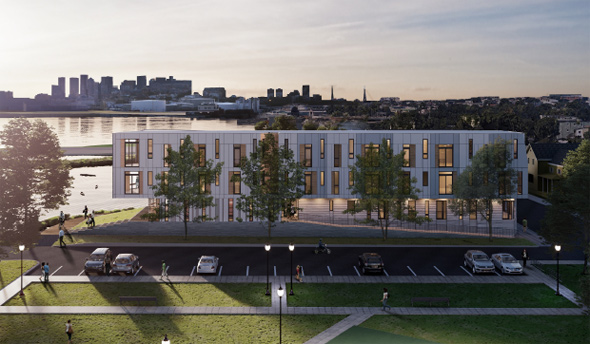 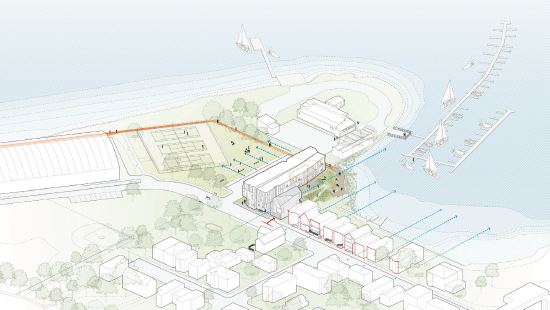 Looks like shipping containers with windows cut out of them.

Have you looked a triple decker? Ever?

I think this is really nice. The massing and form are thoughtful, and having seen a full presentation of this from the architects I think the project meets the challenges and constraints of the site in very intelligent ways.

Ryan for the kind words.

"I dunno, Jim, this concept drawing looks kinda cheap and...

...nondescript. Just a bunch of blank panels. What can we do to jazz this up?"

"Hey, what about if we make all the windows look like we purchased them at random?"

on the photo caption .

In East Boston did a developer
A stately complex decree.
Where the BWS sewer main ran
Through caverns measureless to man
Down to Deer Island.

"Slenderness of the massing"?

"Slenderness of the massing"? Oh, for the good old days, when words meant things.

I initially misread this as

"Slenderman for the masses"...but it wouldn't even surprise me if Slenderman worked as a developer.

That is what words mean

Massing is a very basic and widely used word in architecture theory. A bit of a jargony word for shape, but it's used to specify the more precise sense of the rough outline of the shape and proportions as opposed to finer details. And a proposal with an urban planning committee seems like precisely the right time to get a bit technical with your language.

And the shape of that building is indeed a long skinny rectangular prism, which makes the street-facing part of the building roughly the same size as the neighboring buildings even though the volume of the building is bigger. Slenderness isn't the first word that would come to my mind, but I mean yes, it is that.

I'm glad to see this

I'm glad to see this development will have at least 1 parking space per unit, however it is still short 4 spaces to meet the number of parking spaces needed for a "Transit Oriented" development.

That area will not appeal to

That area will not appeal to the Yuppies or the Savy buyer , Yuppies don’t want to live near shades beach with the loud planes taking off every minute and the exhaust fumes blowing , they would rather buy near Airport Station , Maverick or Jeffries point where everything is in walking distance. When I think of that area near shades beach,
I can only think of TheStompers East Side girls video .

Horrible design. Looks like a box with some windows plus the parking area will flood during the high tides.

Residential buildings could replace East Boston casket factory destroyed in a fire
Bus driver who was out on bail on an assault-and-battery charge tried to rape a passenger in Winthrop, DA charges
East Boston Savings Bank bought by Rockland Trust
World-class signage at Logan Airport
Bank customer is an honest woman
If only Boston had a public-transit system with stops right at the airport ...