Full to bursting on the Blue Line: People at Maverick watch helplessly as four straight trains show up full, leave without them 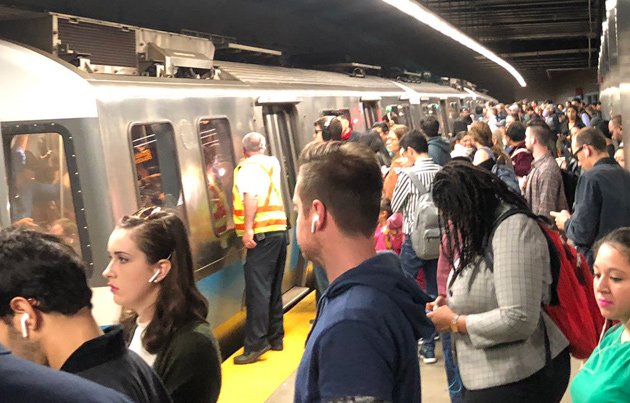 No room at the T. Photo by Chris.

Lisa Jacobson reports she was part of the growing horde of riders at Maverick this morning forced to just stand on the platform and watch one train after another leave with no room for them to fit on.

Tough way to end the week on the #MBTA blue line. Spending a lot of time on the Maverick platform this morning, now waiting for the fifth train to come by. We can do better!

Chris was also lost in the crowd, although he was slightly luckier: He was able to squeeze onto the fourth train that pulled in, for the ride downtown:

It was an absolute joke. I finally made it over on the 4th, almost just went back home to work remote after 3. Watched a family with a stroller just give up.

Maverick has been pretty bad during the AM commute since 9/1, but today was the worst I’ve seen. 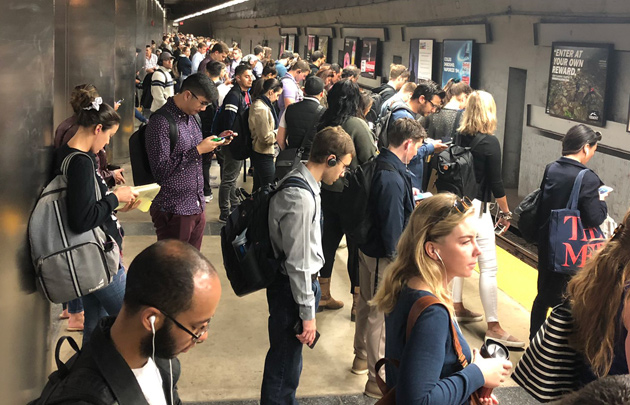 IT would be interesting to see how many blue line employees called in sick or on FMLA for the start of a long weekend.

Do we know why?

Was there an earlier interruption of service, or was the T running 4-car trains instead of the usual 6?

It's steadily been getting worse

and worse on the Blue Line. Maverick is the last stop on the east side of the harbor, and is a huge pinch point for crush capacity trains.

On the one hand, if there is some congestion issue that is causing the 5 minute headways (per the T's schedule) out to 8 or 9 minutes or even longer, you're going to get packed trains during rush hour.

On the other hand, if the trains are arriving at Maverick between say 7:30 and 8:00 every 5 minutes and they are packed, the problem is deeper. Over 10 years ago someone ran a study that questioned whether the T could handle all the developments that were going up, which all noted T accessibility in their environmental impact statements.

We need holistic planning, but since different agencies in different levels of government handle the parts, it gets messy.

Ridership is increasing on the Blue Line.

In addition to general

In addition to general ridership on the Blue Line going up, the state has been encouraging people to take the T from the north instead of driving due to the ongoing Tobin Bridge/Chelsea Viaduct road work that started this summer.

If 111 was effective BRT, East Boston wouldn't have this issue

I'm surprised the tweetee (Jacobson) hasn't picked up on this. She works for a big BRT booster. If 111 was an effective bus system, you wouldn't see this East Boston surge

When it goes over an open bridge, and one with lane reductions to boot?

such as Suffolk Downs? That's going to be massive, probably much bigger than Assembly Row.

Reasonable service on the Blue Line until 8:34 at Maverick (one 7 minute headway, though). But then there were trains at 8:43, 8:49 and 8:54. Those longer headways at peak rush meant that the trains were full, and it took several trains on normal headways to clear the backlog. Why was there a gap? Maybe a dropped train, maybe a train out of service.

You can sort of trace the trouble back to an outbound train which was on a reasonable headway at Wood Island (at 8:10:29, with a 6:29 headway) but then:

Wood Island 8:10:29
Orient Heights 8:13:06
Suffolk Downs 8:14:41 (the following train was held back, so it seems like they knew something was amiss, maybe signals, maybe equipment)
Beachmont 8:21:55 (now a 12 minute headway, the follower having caught up, so they must have cleared the issue)
Revere Beach 8:21:32 (!! the train went back in time, I'm guessing there's a data glitch here)

The trains turned at Wonderland and the gap was actually worse inbound earlier in the line as they filled up. But without enough service, Maverick filled.

This shows how close to capacity the Blue Line is. If there is a train every 4-5 minutes as scheduled, it works fine. But one missed trip and it backs up for a while. A lot of the system is like that, which is why actually fixing things needs to happen. Suffolk Downs to Revere Beach is scheduled at 4 minutes, and if it took 7 here, that's enough to cascade things back.

(data, for what it is worth, via here)

Thanks for the info

And the data webpage is AMAZING.

Keep up the good work.

Too bad Ari's data is all wrong

Transport agencies put out "save for public consumption" numbers alongside their sobering federal filing numbers. They never match, and its easy to see when a transit nerd simply googled for data.

There was an alert sent out

There was an alert sent out that there were delays of up to 10 minutes because of a signal problem at Beachmont. The last time the Blue Line ran any four-car trains was about 10 years ago.

Maybe is time to convert the

How would converting the subway lines to moving platforms help?

You joke, but the City of

You joke, but the City of Oakland has proposed using gondolas downtown as a way to get people from the nearest downtown subway station to a proposed A's stadium on the water.

You'd just hop on the

You'd just hop on the conveyor belt and get rolled into town. Don't worry, it's not a real idea, but you can see how it would work.

The roads must roll!

The roads must roll!

Central square can be the same way on the Red Line

I'm guessing this is similar to the problems we have at Central. In the morning rush, lots of folks board at alewife, Davis, Porter and Harvard, but very few get off. By the time the train reaches Central it's full. Then when it reaches MGH, people start getting off and there's room again. Maverick is probably the peak for blue line inbound.

Or Sullivan on the Orange Line

Take the train north to make sure you get a seat south :-)

A number of people get on the

when I lived there, if there was a large crowd at Malden Station.

on the Silver Line during PM rush, or any stop on West Broadway inbound during AM rush hour.

This movie presents a fairy tale view of Blue Line travels, where two people can meet and fall in love.

I would not want to do this

I would not want to do this every day but when trains are crowded, I'll often get on a train going in the opposite direction for 1 or 2 stops and then board a less-crowded inbound train.
Livin' with the MBTA.....

Are earpods really that

Are earpods really that popular?

Did you look at any other pictures?

At least that way you’re listening to your own music and not that of the person next to you watching music videos without earphones. It also saves on court costs.

when you spend some time where almost no one uses them, once you're in Boston they are very noticeable.

It's time for Stephen King

to update his book about cell phone zombies in Boston, and make them earpod zombies.

What do we want? Two minute

What do we want? Two minute headways!

When do we want them? Every two minutes!

without the requisite transportation improvements has caused this.

allowing developers to mash all those luxury condos and millennial adult dorms onto the waterfront - surprise! it has consequences!

gentrification and overdevelopment continue apace, transportation alternatives are not implemented, and this will only get worse.

we have only to thank global warming for allowing the harbor to already be nipping at the feet of some of those stupid condos.

A higher speed ferry between EB, Rowes Wharf, and WTC would make a lot of sense right about now.

Ferry would be great

Throw in a Charlestown leg as well. It wouldn't even have to be high speed. Such short distances.

Hull to Long Wharf is 25 minutes and only stops service during blizzards and other major storms.

I took it for a few years and I think it didn't run twice in that time. And these were on days of major storms. They run right up until conditions don't allow them to.

Ferries around the inner city would take far less time and have even more uptime.

What is the passenger load

What is the passenger load outbound at that time of day (as compared to inbound)? Where are crossover tracks near Maverick or Wood Island?

I ask because I'm wondering if it would be possible/practical during morning rush for an outbound train to discharge all passengers at (for instance) Maverick, switch to the inbound track, and pickup as an empty train at Maverick.

where the tracks to the yard branch off. Whether this would help, I don't know.