Harriet Tubman House to be sold, its programs moved to another South End site 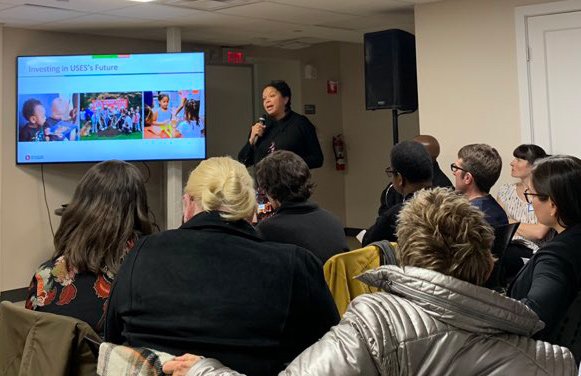 Officials at the United South End Settlements say they have little choice but to sell off the Harriet Tubman House on Columbus Avenue and move its programs to another USES building on Rutland Street: The current Harriet Tubman building is in dire need of expensive repairs and most of its programs run at a deficit.

They're similar arguments to those made by officials at the Benjamin Franklin Institute of Technology, who also recently announced plans to sell their South End home.

At a community meeting at Rutland Street last night, a number of residents expressed their sadness and frustration at the proposal to sell off the current Harriet Tubman House, named for the abolitionist whose life inspired six Boston women to create a place to stay for young black women newly arrived in Boston. This settlement house, originally on Holyoke Street, eventually became part of USES, which moved into the current Harriet Tubman House in 1975.

"The urban pioneers are moving in again and moving us out of the South End," one resident said.

"The Tubman House has a very painful history," another resident said, referring to its past moves around the South End and to what she said was the current secrecy over the proposal to sell off the building. Some noted the irony of holding the meeting about an institution of historic importance to Boston's black community during Black History Month.

But USES officials said the Harriet Tubman House - which sits on the site once occupied by the Hi-Hat jazz club - is more than just a building - it's the people and its programs.

USES President and CEO Maicharia Lytle and other officials said that most USES programs are now running at a deficit - save for Club 48, an after-school program and an early-childhood education program. The group spends $600,000 a year to maintain its current programs at both sites.

Joyce King, 88, and a lifetime South End resident, said the 48 Rutland St. building is an important part of the community as well. King, who lived on the building's top floor for 12 years, was always an avid volunteer for USES programs, including those at the building she and other locals call, simply, the 48.

USES will hold another community meeting on its future on Wednesday at 8:30 a.m. at 48 Rutland St.

Towards the end of the

Towards the end of the meeting, someone mentioned that there might be a "community benefit" restriction on the HTH's deed. Anyone know if that's true?

It is a very interesting RFP. It indicates that they are interested in more than just the top sales price and that they are interested in community benefits. My team put a proposal forward that would include a 99 year lease so that 100 years from now The non profit would again regain ownership over the parcel and the buildings that would be built there which likely will be a huge boost for the organization. They definitely would like to retain some community meeting area if possible as well.

As much angst as the tech, financial svcs, etc generate

Our non-profit friends are trying to get by with even more lean budgets, grants that expire without renewal, fundraising that is largely apathetic... sad news but not surprising. Several years ago, a Latino public health agency on Berkeley St had to close after 20 plus years for the same reasons.

Very sad to see this go

This building is so dear to me. My late grandmother Mrs. Drumgold worked here for years and even volunteered here after she retired until she passed at 82. The Tubman house was a safe haven for not only black women, but also men and children alike. I really hope the city continues the programs provided. Tubman house provided myself and hundreds of other girls (many whom I've bonded with since age 10) the experience of overnight camp at Camp Walden with the Maine Idea program. I also enjoyed the teen events they used to host. So many warm memories this place has brought to myself and I'm sure many others.

Following up on the recent discussion of the "Negro Traveler's Green Book", for several years in the 1940s and 50s it listed a Harriet Tubman Hotel it 25 Holyoke Street, off of Columbus Ave. between West Newton and Dartmouth. No word on whether it had any affiliation with the nonprofit or not, but clearly the name was an inspiration.

Shut it down, or change

I love that people see the benefit in USES. It's obviously served the community well, But if they are running the risk of not paying bills, payroll and will have to shut down, then by all means sell the building. We all have to reinvent.

What makes USES great is the people who work there, and the people they serve. Not buildings. If selling a HTH helps them stay in business I applaud their fiscal action. I'd rather see the building sold then losing any more needed services.

For all those who criticized USES for cutting programs and selling buildings.... did you contribute any money? I have, I will and I support them doing what they do to continue serving the community.

Especially good if the funds are indeed set aside for an endowment, to keep these programs going over time....

It'll be big, tall, ugly, with and a dumb name.

And the top 3 floors will sit empty as tax write-offs for out of towners who wouldn't dare not stay at the Mandarin Oriental while in town.

If only we cared about the entire citys history (not just the 3 cornered hat types) and helped local programs like we hand out helipads for massive failing corporations.

Imagine electing a Mayor with close ties to the construction business who doesnt have the forethought to ask a few bucks from Suffolk for these types of programs?

Imagine the public reaction if GE had done something similar instead of demanding helicopter rides for their overpaid execs?

Seriously, what DOES Marty actually do in City Hall?

Doesn't USES already have a multi-million dollar endowment? And if an organization with such a rich history and connections cannot raise money for their programs perhaps the programs are not resonating with the community's needs? Not surprising that the child care program is doing well-so many white upper class kids in that program.

I'm not an expert on their child care program

But if a lot of white upper-class kids are in it and their parents are paying enough to cover the costs and support other USES programs or help subsidize poorer, non-white kids in child care, isn't that exactly the sort of model we should applaud?

A multi-million dollar endowment may not stay that large if you have multi-million dollar repairs needed on an aging structure. Also, monetary policy over the past decade hasn't been kind to individuals and organizations who need to invest in relatively safe assets as well as produce income. Harvard can afford to put big chunks of money in hedge funds because they won't go broke if the investment goes to zero. Smaller organizations like USES can't take those sorts of risks.