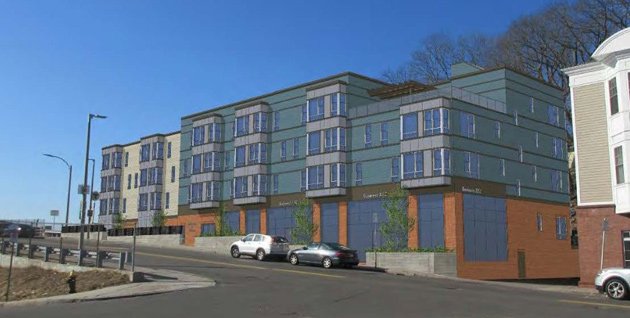 A Hyde Park home builder is looking to replace four two-family homes it put up in 2004 and rented out on Fairmount Avenue with a four-story, 47-unit apartment building.

The BPDA will hold a public meeting at 6:30 p.m on Oct. 22 at the Boston Police Academy, 85 Williams Ave. in Hyde Park, to discuss the proposal by the DiSipio Building Group for 99-105 Fairmount Ave., which runs between the building where the Fairmount Grille used to be and the bridge over the Fairmount Line and the Neponset River.

In addition to the apartments, DiSipio is proposing ground-floor commercial space and 33 parking spaces. It says the proposal is "transit oriented," what with being a walk of about a minute to the Fairmount stop and ten minutes to the Hyde Park commuter-rail stop.

It's one of several proposals that have popped up of late along the River Street/Fairmount Avenue corridor in a neighborhood that had once been largely avoided by Boston builders.

Just last night, two developers presented preliminary plans for a 48-unit condo building where Dempsey's used to be on River Street, across from the Muni. Last week, the family that owns the Rogers gas station in Readville proposed a 32-unit building where Junior's Automotive used to be at River and Business streets.

In March, the BPDA approved a 24-unit building on Dana Avenue, near the Rite-Aid, although residents are still trying to convince the city that it requires variances and a hearing before the zoning board.

In a filing with the BPDA, DiSipio says it will provide residents with both private and shared garden space on the first floor as well as roof decks in a building it will call Logan at Fairmount. The 33 parking spaces will be in a below-ground garage accessed through Maple Street.

The filing discusses the challenges of building a large structure next to what is essentially a ramp up to a bridge:

One of the most significant project challenges related to the siting of the building is the existing Fairmount Avenue Bridge which abuts the site along Fairmount Avenue and has related retaining walls beneath it along Maple Street. The portion of Fairmount Avenue abutting the site was constructed under the jurisdiction of the Commonwealth of Massachusetts as a State Highway. There are significant existing retaining walls along the east edge of the site that influence the positioning of the building on the site, requiring the design team to create a buffer zone of outdoor space to keep the new building foundations outside of the zone of influence of the existing retaining wall. The portion of Fairmount Avenue considered a State Highway has existing galvanized steel guardrails along the property line. The design of The Logan at Fairmount proposes to replace the existing guardrails with new board formed cast-in-place concrete walls which are designed to create an accessible path to the first floor program spaces which face Fairmount Avenue.

DiSipio says it will also work closely with the Boston Water and Sewer Commission to deal with storm runoff from the site.

not everyone can live in Dorchester or South Boston.

I remember when they were built

I drove by that spot on my way to school everyday for 9 years. I remember when they were built and thinking to myself at 10 years old *why would someone want to live behind a bridge* as I got older in High a school I realized it was just terrible planning to build two single family homes there. Certainly didn’t think the developer would come back to raze his own development though

Smart. Very smart. The Developer got in 50 SF below the Article 80 Large Project threshold. A bit risky, but I might have gone for the gusto and made it a few stories taller. This is a hop, skip and a jump from the commuter rail and buses to Forest Hills.

Yes, 47 units is a better fit for across the street from a train station than 8 units, but tearing down buildings that were built 15 years ago just seems to be a waste. Compared to other places, our region does build housing to last at least 50 years, so tearing them down after such a short amount of time is wasteful.

Again, nothing against the project. If the developer has money to burn, let him burn it, I suppose.

I Shudder To Think

What all of the cheap get-rich-quick garbage buildings that are being thrown up all over the city are going to look like in 50 years.

I can show you

a half dozen buildings built within the last ten years that are falling apart. I think in 50 years, or the next recession, they will no longer be standing.

Eh. The land is considerably

Eh. The land is considerably more valuable than the building materials. Empty space where people would prefer to live is much more of a waste than a few thousand pounds of pine.

Lets do the math

Are we supposed to think that

Are we supposed to think that's a lot?

I think 703 units are way too many

I little comparison, when housing projects were built.

You are talking 703 unit in what one mile area, that's a lot lets face it the MBTA Bus

The city has been gaining almost 10,000 people a year in the past decade. People have to live somewhere, so why not build some units in the one part of Hyde Park with a reasonable claim to be served by transit. Maybe the T might consequently improve service on the Fairmount line in a few decades.

Affordable for the population

Boston is growing, but a lot of that increase are immigrants. Which is fine but these new buildings going up are not affordable especially to most immigrants or even people who have lived here all along. I think when they build a new development only 12 or 13% have to be low income.
The new building on Centre St across from Roche Brothers units going for 719K!!!

The average American cannot afford a new car, but that's okay because there is a steady supply of used cars always coming on the market as richer Americans constantly sell their old ones and buy new ones. Housing works the exact same way: New housing has never been affordable to the average person, but that's okay because it becomes affordable as it ages. As long as there's a steady supply of NEW housing coming on the market, rich people won't buy up the used housing and renovate it, displacing those immigrants in the process (which is what's happening right now).

TL;DR: We need that expensive new housing to keep the rich people from snatching up all of the cheap, old housing.

The house may age but the price always goes UP.

It's not the value of the house that goes up

We are talking about Boston area

And 703 new units within 10 miles of downtown Boston

Will be worth more than 703 units in Fitchburg or Brockton, because the relative value of property within 10 miles of Boston is greater than that of property in those other cities. There appears to be a market for new housing in the Boston area, and rather than going on about how these 703 units will help the average person, I suggest you read other comments on this thread that explain it.

Not just the land but also

Not just the land but also the permitting opportunity cost. It's legally quite difficult to build a new triple decker in Boston (because of parking and setback requirements) so there is inherent value to a property already being there even if it's in a dilapidated state. Because of this, built real estate will appreciate even faster than the value of the land, and even if no work is put into maintaining it.

Don’t forget the smaller recent buildings on Nott st, 735 Truman play and next to the Fogg post. The Roger’s school is going to be converted also. These are the same people who built on Met/Beacon and did not care about their neighbors

complexes look like factories.
Come on Architects. You can do better!